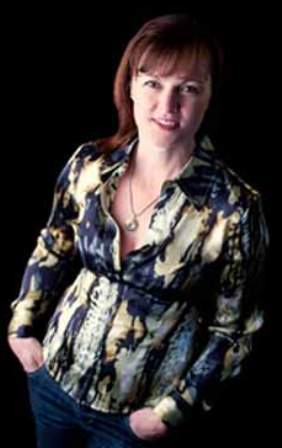 Glass sculptor Elizabeth Armstrong was surprised to feel relaxed when she walked into the CBC TV studio to present her business, Aqua Vitae Stemware, to Canada’s Dragons’ Den panel. Armstrong figured she was calm because she’d already got through the bigger challenge, which came earlier when she prepared for the session by presenting to her friends.

“Just before I went to Toronto for the taping, I had a Dragons’ Den party,” the Montreal-based artist and business woman told Celtic Life International. “I invited a group of my friends that are fans of the show to come and be the dragons to prepare me. That was nerve-wracking. My friends were ruthless, much worse, than the real dragons. Being in front of the real panel was a lot of fun. As long as you are prepared and you give them a show, they love you and your product.”

The TV panel of well-known business people asked Armstrong about the scalability (growth potential) of her business – a possible problem for an artisan. They loved the Dragons’ Den wine and whiskey glasses that she’d made for the show and were also taken with her Kama Sutra glasses.

Armstrong’s Celtic–themed glassware usually impresses people, especially her Beastia Collection, which features four Celtic animals — the Welsh Dragon, Celtic Boar, Irish Wolfhound and Scottish Lion. She also makes a Tribal Trinity Knot that is sought after by many who are not of Celtic background but who like Tribal art.

Inspired by her own heritage which is Scottish, Welsh and Irish, Armstrong began her business after working for glass sculptor Peter Collins at Vitrie Montreal while in university.

“When I graduated, I built myself a glass studio where I sculpted large pieces of glass art for family and friends,” she said. “I took a leave of absence from work three years ago to explore starting a small business in glass sculpting. I officially started my crystal stemware business two years ago, focused on Celtic art on crystal wine, whiskey and beer glasses.”

In the two years she has been in business, Armstrong has managed to get her crystal glasses into 40 stores in North America as well as a couple in Scotland and Ireland.

“Most of my business is in the United States. I also have several stores in Canada that carry my Celtic glasses, as well as my Great Canadian Loon glasses that depict loons during mating season when they dance on the water with their wings outspread.”

Armstrong has recently expanded into making custom-designed whiskey glasses for a whiskey company in Alberta, in western Canada, as well as provocative crystal wine glasses for high-end erotica boutiques and lingerie stores.

She said her main competitors are businesses that laser-etch logos onto glass as well as crystal companies that cut crystal with geometric and linear patterns. Armstrong said she works differently. “I don’t etch glass; I deeply engrave crystal glasses. I have a lot of flexibility with the designs I can do on the crystal. I use crystal instead of glass because as an art medium it is beautiful to use. The clarity, weight and sparkle of crystal highlight what I do with the designs. Also, each piece is enhanced with a Swarovksi crystal or semi-precious stone. My pieces are unique.”

The artist said she finds it rewarding to work with an individual to create something personal that they will cherish. “That is primarily why I focused on Celtic art on crystal stemware. I like the stories behind the images and include them with the glasses when people purchase a set.”

Her crystal stemware is bought by both men and women. “My beer and whiskey glasses have bold designs on them, meant for men because it’s often very hard to find a good guy gift.”

Packaging is a challenge as its cost can bump up a product’s price. “Glass is fragile and has to be shipped carefully. I needed boxes that protected the glass, looked elegant, weren’t too bulky and weren’t exorbitantly expensive. I have been able to achieve packaging that does what I need it to do.”

Having overcome these issues, Armstrong is looking forward to revealing how she did on Dragons’ Den and seeing what impact the show has on her business after it airs on CBC TV later this fall.