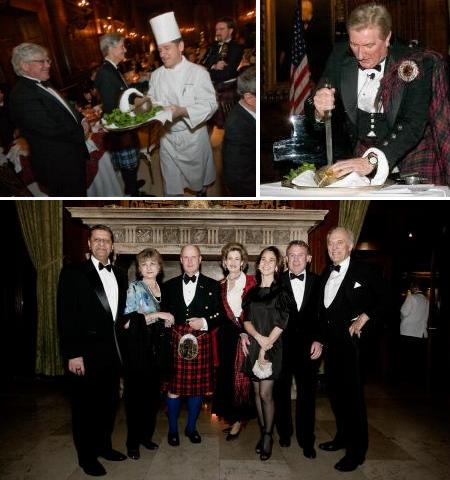 The American Scottish Foundation is holding its 19th annual Burns Supper in NYC tonight. Recently we spoke with Alan Bain, Chairman of the ASF, about this evening’s event.

What is the history of the ASF’s Burns Supper?
Our Burns Supper started in the early 1990’s. I was head of the American-Scottish Foundation, and also on the board of a private club. The club management was noting the absence of social activities in the dead of winter, and I remembered my father, a Scot and a great Burns fan, talking about Burns Suppers. I suggested they might enjoy hosting a Supper in conjunction with the ASF, and so it began. Our first Burns Night Supper was in January 1995.

How has the event evolved over the years?
The foundation is about to host its 19th dinner. There have been a few fundamental changes – for example, many in our audience are not familiar with Robert Burns, and an in-depth lecture for the “Immortal Memory” may be too cerebral. Also, some Scots’ accents were too difficult for American ears! [laughs] But the audience really enjoys Burns’ music and words, so we have had skillful performers act out such works as “Holy Willie’s Prayer” and “Tam O’Shanter.” These are greatly enjoyable. We also often have the “Toast to the Lassies” and “The Lassies’ Response” sung using Burns’ songs, the toasts concluding with duets. Over the years, the music has become less operatic in style and more country/folk. Recently, we have enjoyed Alyth McCormack from the Isle of Lewis, Fiona Kennedy from Aberdeen, and Phaime Gow from Edinburgh. We’re delighted that Maureen McMullen and Mike Ogletree are returning this year to perform the toasts.

Who attends?
What is particularly successful about the program is the partnership between the club and the ASF, resulting in attendees from both groups. We also welcomed women at a time when several Scottish-American societies were men-only. We pick an early date for our dinner as there are several Burns Suppers in New York City, and this enables local Scots to attend more than one. And over the years, we’ve continued to encourage our members to bring new people, introducing them to this great tradition.

What can they expect to experience this year?
The evening is a celebration of Robert Burns in true Scottish style. We will have over 250 guests joining us, many returning each year. The setting we have heard described as “the nearest one can come to a Burns celebration in the Highlands,” a grand paneled dining room in a landmarked building designed by a Scot. Guests are greeted to the strains of the Foundation’s piper and enjoy a whisky tasting reception before being piped into dinner. Once seated and Grace is said, the music begins, performed by Maureen McMullen and Atlantic Seaway, Then it’s time for the ceremonial Haggis procession, where it is carried into the room by the chef, the piper, the whisky bearers – it’s a lot of fun. The “Address to a Haggis” is a key element of the evening, and will be performed by Ken Donnelly. Originally from Glasgow, Ken is a banker, a former board member, a member of the Burns Society, and great orator – his delivery is dramatic, clear and compelling. During dinner, there are short introductory remarks about Robert Burns, his reputation and the celebration of his life occurring around the world. Ambassador Uden will bring greetings from the British Consul General; Alfred Bissett, former president of the St. Andrew ‘s Society of the State of New York, will give the Toast to the Queen; Darren Burgess, Second Secretary, the Scottish Government, will bring greetings from Scotland; and John Booth, Head of Marketing, the Scottish Government, will give the toast to the President. The musical toasts will be followed by the Reels (an energetic set of Scottish dances led by Hannah Read) and the drawing of the Winter Raffle, bringing the formal part of the evening to a close. The bar stays open and the dancing continues until 11:00pm.

Why is it an important gathering for the Scottish community there?
Scots around the world have a deep love for Robert Burns’ music and poetry, and especially his themes of humanity and compassion. When the holidays have passed, and spring is far away, it’s wonderful to be able to get together with family and friends, celebrate his spirit, and feast and sing and dance. The success of the evening comes from a mix of the audience, their enjoyment, the opportunity to celebrate Burns’ memory, and being part of a cultural tradition that is being shared around the world.

What are the future plans for the soiree?
We recently discussed this with several of our members, and they did not want us to change anything. So for now, I expect that the evening will continue in much the same vein – keeping it fresh and with new musical talent. The Reels are a growing element and have added considerable vitality to the evening.

What else does the ASF have on tap for the coming months?
On February 25th, we have a New Member Night at a wonderful spot, Cafe Tallulah. Then on March 19, we’ll be heralding the arrival of the Kelpies to Bryant Park in midtown Manhattan! These are two 15-foot-tall scale models of Andy Scott’s massive 100-ft. horse sculptures. They will be on display for a month, making Bryant Park a center for the celebration of Scotland in New York, and connecting with the formal opening of the Helix Project with the full-size Kelpies in Falkirk, Scotland. The rest of February and March will be devoted to preparing for Tartan/Scotland Week (now up to two weeks) in April. For the ASF, 2014 is going to be a landmark year. We are involved in events not only in New York but also in Washington, DC. For example, Ross Gillespie and Tricia Malley, award-winning photographers from Glasgow, will have an exhibit entitled “As Others See Us” at POP International in the Citicorp Building. The exhibit consists of portraits of well-known Scots incorporating lines taken from their favorite piece of Burns’ work. The ASF is a founding member of the National Tartan Day New York Committee, and continues to work organizing the Tartan Day Parade in New York City, coordinating events that week, and assisting the Scottish Government in implementing its plans to bring its tourism and Homecoming messages to an American audience.