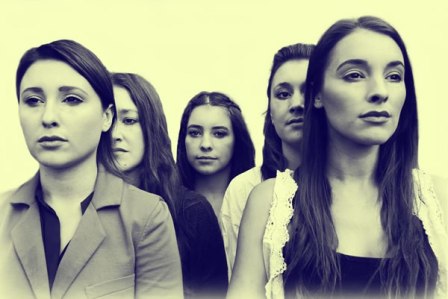 Indigenous to the rocky shores of Newfoundland, five sisters began making music together from a very young age. Recently we spoke with one of those siblings, Kaliyan Palmer.

What is your own background/ethnic heritage?
Irish ancestors. Mom is from Dartmouth, Nova Scotia and Dad is from Newfoundland.

When and why did you start playing music?
Our parents encouraged us to learn how to play instruments and sing when we were young. so we learned some songs together and began performing. It actually all started by singing hymns in church. But it soon grew to festivals and events around the st. john’s area in newfoundland. Mom and Dad always said that if its music you want to do then just go do it. so we did. it was something that we always loved to do. So we stuck with it throughout the years and took advantage of every opportunity we could. we practiced almost every day. And we were very fortunate to meet some very special people along the way who also encouraged us and taught us what they knew. teachers of all kinds. Peter Gardener, Al Strickland, Kellie Walsh, Sandy Morris, George Massenburg, Craig Young, Korona Brophy, to name a few. We learned things wherever we could whenever we could. And I’m so grateful for the people who have believed in us and helped us and supported us along the way. We continue to play music because ,…well,.. its kind of like breathing. It’s living. It’s laughter…. and I think the rest of the girls would agree. Its a form of expression, it’s emotions, its storytelling, its sharing an experience with the audience. And its for anyone who wants to listen.

How long has the band been around?
Well like I said, being sisters we grew up together. So that question is always kind of strange for me to answer. We’ve been a band as long as I can remember. But if you’d like to put a date on it our first public performance was somewhere in 1997. I was 9. I am the oldest so everyone else was younger than that. I don’t even think Shaelin was old enough to perform with us at that point.

How has the group evolved since that time?
Gosh, it has evolved so much. We write a lot of our own music now too. So with the songwriting, the style of music is becoming more and more something of our own. The music is still Irish influenced since that is the music that we first learned to play and listened to as kids. Growing up in Newfoundland, we listened to those old traditional tunes on homebrew radio on sunday mornings so that genre did have an impact on us. the major difference in our sound now and what we sounded like then has a lot to do with maturity as well. We don’t sound so much like chipmunks singing 4 part harmony anymore.

Why the decision to start performing Celtic music?

We don’t just perform Celtic music. We write our own tunes as well. We also do some covers that fall in the rock genre as well as bluegrass, indie, and pop. But as I’ve said, growing up in Newfoundland, its hard to escape that Irish Newfoundland influence haha. It’s everywhere. And its part of our heritage as well. So it wasn’t a decision as such. But rather an influence upon us growing up.

Who are some influences?
We’ve had all kinds of influences. it’s all over the map really. But to name a few: Fleetwood Mac, Bon Iver, The Rankins, Bob Dylan, Peter Gabriel, Michael Mcgoldrick, I could literally go on for a long time.

How would you describe your sound today?
The best way to describe the sound is probably folk. I know that’s broad but I find categorizing our sound is the hardest thing to do. We aren’t afraid to try new things and experiment with different genres. That’s half the fun!

Where do you typically perform?
We typically perform at folk festivals and soft seat venues around the maritime provinces. Bars as well. Lately we’ve been hanging our hat at The Economy Shoe Shop in Halifax. And sometimes at The Old Triangle too.

What is the response like from audiences?
I always feel a strong connection with our audiences. We’ve been honoured to receive standing ovations and encores. And one of the nicest compliments we’ve received was that people describe us as real.

What does the band have on tap for the rest of 2014 and for 2015?
We are currently working on material for a new album.

Is enough being done to preserve and promote Celtic culture?
Oh I’m sure there’s always more to be done. But it’s difficult when you’ve only got so much money to work with. And it surely doesn’t help when decisions are made to make cuts to the arts. In my opinion, the arts are so important. Its a reflection of the people and their culture. And without the proper support, preserving and promoting celtic culture will suffer.

What can we be doing better?
Perhaps more education about the culture. More funding for the programs and events. Get young people excited and involved.