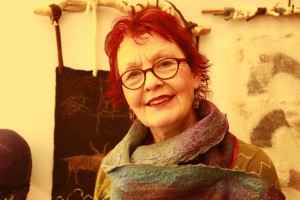 What is your own background/ethnic heritage?
I am originally from Germany but moved to Ireland in 1979. My husband and I bought an old cottage in the west of Ireland without electricity and running water. We started trying to be self-sufficient. Our daughter was born in Co Galway in 1982 and now we are expecting our second Irish grandchild.

How long have you been with the company, and what is your position there?
I have been working as a sole trader under the name Bombyx Mori since 1999. Since my childhood I have been surrounded by creativity, fashion and the arts. My mother was a textile designer and later I trained as a professional make-up artist at Film Studio Hamburg and Thalia Theatre, while also studying art. In 1986 I began painting on silk and a decade later began to see this as a viable business opportunity. Bombyx Mori comes from the Latin name for the silk moth. I started adding felt to silk in 2002 and since then have built up a wide range of products including scarves, hats and wall-hangings. I gained a lot of recognition for my work and was twice awarded the first prize for felting in the RDS National Crafts Competition. We have a studio, gallery and workshop with an Asian-style tea-house at our home, which provide a solid base for the business and give clients the opportunity to see the process of creativity in action.

What are the challenges of the profession?
Since my items are hand-made and I am a sole trader it is hard to go up against factory, machine-produced items in terms of price and uniformity but I do believe that people are willing to pay for unique good-quality hand-made goods. It is also challenging to stay one step ahead of others in terms of colour combinations and designs. The Irish market is also quite small and Arts and Crafts are not widely promoted and supported by the State so it is hard to stay in business, something especially relevant in current conditions.

What are the rewards?
Doing something I love is reward enough in itself. I also find happiness seeing the enjoyment my work gives people. There is great satisfaction in seeing wholesale and retail clients coming back year after year for new items. Keeping a stable customer base is a testament to all my hard work and something which I really cherish. I enjoy the challenges set by a customer commission and also like to challenge myself to create exciting new products.

What is the company’s core mandate?
I pride myself on producing only the finest felt and silk items using high-quality naturally-dyed wools and silks sourced from eco-friendly producers where possible. I spend that little bit longer making the products and this is evident from the attention to detail in the end result. Each item is hand-made in the West of Ireland and slightly unique – a point which I really like to highlight.

What are your key products?
The fashion ranges focus mainly on hats, scarves, bags and wraps. Within these four lines there are some product highlights, all of which use very fine Merino wool. Prices can vary depending on sizes. The ‘Romance’ hat, which comes in any requested colour, is an unusual but popular shape. It retails for between€175 and €190. The ‘Mermaid’ scarf, one of my newer creations, is a combination of hand-dyed silk, hand-dyed Merino wool and raw Tussah silk. This retails between €135 and €180. The ‘Banana’ bag, which derives its name from its shape, retails for around €100. The ‘Wrap-de-luxe’ wrap is one of my larger pieces. It retails for around €485.

What is your marketplace?
As I mentioned earlier I have a solid base in my studio and workshop. I have also been established on the Irish craft circuit for the last 15 years. Every year I attend both the creative retail expo Showcase in January and the National Crafts and Design Fair which is open to the public in December. Both events are held in the RDS in Dublin. I have several well-established retail outlets which stock my products including Cleo in Dublin, O’Maille in Galway, Cat and The Moon in Sligo, Glenaran Craft Centre, Glengariff, Co Cork. I also sell internationally to shops in Germany, France, Italy and the USA. From April to October every year I go to the Craft Fair in Ballyvaughan, Co Clare – a beautiful seaside location which attracts lot of foreign and local visitors. I use Facebook to promote my work and have availed of schemes offered by Enterprise Ireland and the Crafts Council of Ireland to get my work to a wider audience. People from all walks of life enjoy my work –be they young or old, rich or poor. Creativity seems to transcend all boundaries.

How do you differ from your competition?
All items use a felting technique called seamless – this means that no sewing is involved. Only items such as fitted jackets are sown after being tailored from a single felted piece. The natural and delicate raw materials used are what differentiate Bombyx Mori pieces from other felted items. Nuno felt technique is another attractive feature of a lot of my work. I have begun carding my wool making unusual blends of colour which cannot be bought elsewhere.

What are your thoughts on the current state of the Irish economy?
The craft and arts sector seems to be suffering with regards to funding from Irish government sources and I feel the sector is somewhat undervalued as it is playing a vital part in the attempted economic recovery of the country. In 2012 the majority of new self-employed people worked in the arts and crafts industries showing that there is a demand for these skills. I think people are being put under enormous pressures with increases in self-employed tax and the introduction of new taxes such as a property tax. These measures will decrease spending power despite the positive slow signs of recovery which were signaled in the latter half of 2012.

Are we doing enough to preserve & promote Celtic culture generally?
2013 is the year of the Gathering which will hopefully bring more tourists to Ireland from overseas as well as reuniting families and helping ex-pats rediscover their heritage. This is an exciting initiative in creating awareness about Celtic culture in Ireland and promoting it around the world. There is definitely a lot more that can be done. Some skills such as spinning, weaving, dry stonewall building need to be preserved. More needs to be done to keep the Irish language alive and a sense of pride in the language restored among Irish people. I have found that immigrants tend to have an interest in the language and enjoy studying it more so than Irish people.

What can we be doing better?
More funded courses should be offered in old Celtic skills. Many of the courses offered can seem elitist and expensive and so tend to lack appeal and exclude many sectors of our society. The Celtic influence can be seen throughout Europe in monuments but as with everything these things need to be better preserved and restored.

What’s next on the company agenda?
After Showcase (January 20-23), I will be focusing on my further education with the International Felt School in Oberrot in Germany. So far I have completed one year of a three-year course and travel to the college twice a year. I will return there in February and after that will spend much of the year developing new products, preparing for exhibitions and completing orders from retailers.