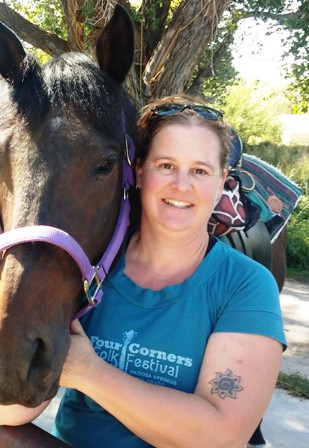 Thousands of Celts will celebrate their heritage in New Mexico this weekend at the Aztec Highland Games. Event chairperson Jessica Polatty gives us the details.

What are your own roots?
My ethnicity is Scotch/Irish (big shock there). My clan name is Warnock—traditionally under the protection of the Grahams—all my tartans are Graham.

When and why did you get involved with the Festival?
I have been involved since day one of planning our first year back in 2011.

What are your roles and responsibilities there?
I am the chairperson of the event meaning making sure all committees are doing what they are supposed to (my committee people are the best) and putting out any figurative fires that may happen leading up to and during the event. I also help out committee members with their work as well if I can.

Why is it an important event for the community?
The event is important for the community economically, culturally, and simply for the sake of bringing community together for a fun and historical event. No one had ever done an event like this in our 4 Corners Region so having it begin in Aztec has been a great boon for us. Our City Government supports us 100% as do the other sponsoring entities that participate. It really is a labor of love but one definitely worth giving time to.

Who traditionally attends the Festival?
People from all over the 4 Corners area attend the event as well as from other parts of the nation and even people from other nations if they happen to be close by on vacation.  I talked to some folks from Boston one time who happened to be in Santa Fe and read about our event in New Mexico Magazine so they came up for the day…and of course had a wonderful time!

What can they expect this year?
New for 2015 we are showcasing our Highland Dance Competition. While these event shave been going on at other Highland Games for year, this will be the first year to have the competition in Aztec. We are very excited to include the dance competition this year and hope it encourages dancers from all over the region and nation to come and participate.

How has the event evolved through the years?
We had no idea what to expect the first year. We did not know how the event would be received by the public or even who would come and compete. We were pleasantly surprised by the turnout for the event and the positive feedback from the public. We were told by the Rio Grande Games folks (good friends of ours) located in Albuquerque, NM that we were crazy to start our event as a 2-day event and were confirmed crazy that we had turned a small profit in our first year.  Since then the event has continued to grow both with number of athletes competing and people coming through the gates. We have tremendous sponsorship and the event would never get off the ground without our committee leads and volunteers. We try to add something new every year even if it’s small like the Bonny Knees contest we added last year as well as being the home of the 4 Corners Regional Championships which also began in 2014. Aztec was unanimously decided to be the yearly host of the championship by the 4 Corner’s state games chairpersons.  Riverside Park (where the event is held) is beautiful in October with large cottonwood trees for shade and the river close by. The City of Aztec does a knockout job of making sure the park is ready for the event; green Grass, blue sky, golden leaves, and tartan galore. What more could you ask for?

Will you remain involved with the event in the years ahead?
I will continue to be a part of the event as long as they will have me although I am looking around for more people to get involved to continue the tradition once we founders are ready to take a step back. We hope that through the years the younger generation will step into our shoes… but don’t touch my kilt, laddie! I plan on attending the event even after my torch of chairperson is passed on.

How else are you involved with the Celtic community there?
The Celtic community here is not a large one but it seems you find Celtic traditions everywhere you go. I am a member of the Order of the Cauldron of the Sage which is my coven. We are a pagan group practicing many varieties of traditions including Celtic. It seems Celtic souls gravitate towards each other.

Is enough being done to preserve and promote Celtic culture generally?
My fear is that the culture is being lost or absorbed by other cultures. I would love to see more emphasis given to the Celtic culture in my area which is an even split of Hispanic, Native American, and European cultures. I believe our festival lends a hand at providing the historical and cultural aspects of Celtic life that many people may be seeking in our area.