In suburban murder mystery Bad Sisters, Sharon Horgan has arguably captured the beauty of Dublin’s coastal towns better than any other filmmaker in recent memory. Filming across Malahide and Skerries in the north and iconic sea-swimming spot The Forty Foot in the south, she zones in on the parts of the city most tourists miss out on. She ground her story – about four sisters who band together to murder their siblings’ abusive husband – in these outer-city areas where real life happens. With an undoubtedly healthy Apple TV+ behind them and some fortunate breaks in the rain – they filmed much of the series in late Summer last year – the camera crew managed to make Ireland’s capital look nearly as appealing as Big Little Lies’ Monterey. We sat down with Horgan to find out how she did it…

Why did you want to set this story in Dublin?
Sharon Horgan: I could’ve set it anywhere, and in a way, because of COVID, it would have been easy to make it a UK thing. But there was something about it… I knew how I was gonna approach it. I knew I was gonna bring religion into it, and the idea of a man who’s outwardly respectable and respected, the idea of the big family. And then I went to [Dublin swimming spot] The Forty Foot and was swimming and my sister and my sister-in-law and I thought, this has to be the linchpin. When I was there, I was watching these groups of women in the freezing water, you know, just treading water and catching up and I thought: they could plot their murders there. This is their, like, sacred place. And also the idea of the Christmas swim, I mean, I’m sure it’s done in other places in the world. But to me, it felt like something that Garveys could have done with their parents that they just carried on as a tradition. 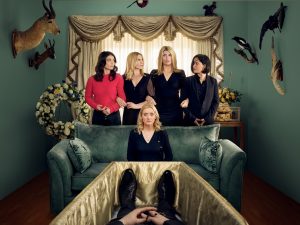 What’s the geography? It feels like bits of a lot of the most beautiful bits of Dublin stitched together…
We made up our own geography. So you’ll have to bear with us on it. There are several places that we wanted in our show. In order to create this world, we made our own map. We knew exactly where we wanted Eva’s house to be, but it was actually in Howth. We filmed in Malahide [a northern suburb of Dublin] a lot. And you know, there’s some areas of London that we filmed in as well to get JP’s house and we were in Skerries [a seaside town north of Dublin]. We were in Northern Ireland for Bibi’s house. We located where each place was, and apart from the Claffins who we said were in the town over, we wanted them all to be in the same area.

Did you think about Big Little Lies at all, when you were making it? I think that that comparison has been made in a couple of reviews…
Well, I mean, weirdly, when we were talking about what our take on it would be and the idea of wanting to really elevate things visually, we referenced Big Little Lies. But for me, Big Little Lies was escapism, it was beauty, you know. whereas we wanted this to feel as grounded and real as you could with four sisters trying to kill a man over and over. It was really important to me that it didn’t feel aspirational or glamorous. Bibi has a beautiful house, Eva’s house is wonderful, but it’s the family home that she sort of stayed in. We used to reference Fargo [the TV series] quite a lot, in terms of the style of humour with dark drama. And the way you can have larger-than-life kind of characters come in and out of that. You need to feel sort of menaced by it, but also be allowed to just laugh at a ridiculous character. So that was one that we referenced a lot more.

What was it like filming at The Forty Foot?
It was kind of amazing. It was part of the magic of it. We had big puffy coats and were wrapping ourselves in foil, getting borderline hypothermia. We had an amazing stunt team and an amazing water team, and they would be in the water with us, and each of us had a water buddy so they would stay in the water for quite a while. At the time I was cursing myself, going, ‘What the hell was I thinking?’ And then when watching it back I realised it was kind of worth it. Because it’s something people are talking about – it’s part of the look and the feel of it.