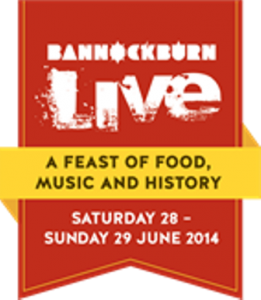 Celtic and folk music artists Julie Fowlis, Dougie MacLean, Karine Polwart and Rachel Sermanni will lead over 300 performers in an inspirational one-off festival to commemorate the 700th anniversary of the Battle of Bannockburn.

VisitScotland and Unique Events have unveiled a stellar line-up for the Homecoming Scotland 2014 event, Bannockburn Live, a two day feast of music, culture, ancestry, food and drink and battle performances on 28-29 June 2014.

Capturing every essence of Scottish culture, the atmospheric Bannockburn battlefield in Stirling will transform into five distinct areas, each with its own unmissable flavour and excitement:

Step back in time to June 1314 to explore the bustling encampments and soak up the atmosphere, sights and sounds of medieval life. Witness armour and swords being made in the Blacksmiths, smell the bread baking over fires in the outdoor kitchens, gasp as men are treated in hospital as they come off the battlefield and speak to the warriors about their skills and strategies.

The Battlefield and medieval encampments will be home to over 300 warriors and camp followers to recreate the Battle of Bannockburn and live the life of 1314. Battles will take place at 12 noon, 2pm and 4pm, so you have one of three opportunities to see ‘The Battle’ – the largest event of this nature ever seen in Scotland. Choreographed by Clanranald, famous for their work on Hollywood blockbusters Gladiator, Robin Hood and Thor 2 and highly respected throughout the TV Industry, each battle will feature a dedicated professional combat team joining forces with re-enactors from across the UK and Europe to collide on the field in a spectacular demonstration of skill and determination.

The stage will come to life with a top quality mix of folk and contemporary music including two of the country’s finest award-winning artists, Dougie MacLean (Saturday) and Julie Fowlis (Sunday).  The stage will be live from 11.15am until 6.45pm. Artists on the Saturday include: Rura, The Deadly Winters, Siobhan Wilson and Saor Patrol.  Sunday’s Line Up will include Treacherous Orchestra, Roddy Hart & the Lonesome Fire, Ross Ainslie & Jarlaith Henderson and Cask Strength Ceilidh Band.  Additional performers will be announced in the run up to the event.

A festival within a festival, Scotland’s culture and history will be told by a range of artists from writers to stand-up comedians and renowned singer-songwriters. Featured musicians include Karine Polwart and Rachel Sermanni on the Saturday and UK Folk Award 2014 Singer of the Year, Bella Hardy and Idlewild frontman, Roddy Woomble on the Sunday.  Authors Alistair Moffat and James Robertson take to the stage to talk about their new books ‘Bannockburn: The Battle for a Nation’ and ‘Robert the Bruce:  King of Scots’.  Family activities will be in abundance in Storyville with Living History Scotland, the National Trust for Scotland and other organisations.  Storyville will have creative craft stalls, a book shop (with book signings) and be served by the adjacent bar in the Land of Food and Drink. Additional performers will be announced in the run up to the event.

Land of Food and Drink

Curated by Scotland Food and Drink, visitors to Bannockburn Live can sample and savour delicious Scottish products, whiskies, real ales and more as well as meet the passionate producers behind them.  Visitors can picnic here under giant tipis and enjoy Food Talk, a programme of talk and discussion about Scottish Food – its history and provenance.

Around 40 clans from across the UK and overseas will converge at Bannockburn for this historic occasion.  Visitors will be invited to meander through the clan society and family community, talk to members and find out about their history and how they can get involved.  Audiences can also uncover their own ancestry with ScotlandsPeople, the official genealogical resource for Scotland with expert advice and demonstrations.

Genealogist and Historian to MacDonald and Rees Ltd will lead a panel of qualified genealogists to offer consultations on Family History as well as talks on Records of Finding People, Places and Inheritance.

Visitors will also get the opportunity to find out if they were related to anyone that fought at the Battle thanks to the Strathclyde University’s Bannockburn Genealogy Research Project which uses DNA testing.

“With the Homecoming 2014 programme well underway and with hundreds of events lined up for the rest of the year, the signature weekend commemorating the 700th anniversary of the Battle of Bannockburn will be a memorable family weekend.

“It will celebrate the very best of Scotland’s food and drink, our assets as a country of natural beauty as well as our rich creativity and cultural and ancestral heritage.

“Bannockburn Live is attracting people from across the globe with an affinity to Scotland and given the focus on Scotland’s past I am delighted that 39 individual clan organisations are participating in the event and also by the strong words of support being received from clan representatives both at home and abroad.”

“On the 700th anniversary of one of the most significant battles in Scotland’s history, we had to make sure we created an event to remember – and with such an exceptional amount of activity planned, Bannockburn Live is going to be simply breathtaking.

“All the performers – from those with swords to those with musical instruments – are incredible and it is an honour to have such world-renowned Scottish stars as Dougie MacLean and Julie Fowlis – who we worked with on ‘Brave’ – perform in the atmospheric surroundings of the Bannock Burn in Stirling.  It’s going to be an amazing experience for young and old.”

“Unique Events are delighted to be involved with Bannockburn Live, to have the opportunity to create a completely new kind of festival, where History takes centre stage. This mix of the theatre (the Battle), national and natural history, outdoor activities and top-class music has not been seen before. We think this is the good-value family event in Scotland this summer. Like the Battle itself, this will be a date to remember.”

“I am very much looking forward to taking part in the Bannockburn Festival, the line-up is fantastic and it promises to be an exciting weekend. This unique festival will look back to commemorate the milestone of 700 years since the Battle of Bannockburn, whilst celebrating the best of contemporary Scotland.

“In addition to the complex choreographed battle displays, I am heartened to see storytelling, debate, conversation and songs at the core of the festival; to discuss and celebrate Scotland’s incredible natural landscape, culture, history and traditions.”

Bannockburn Live is one of over 700 events in the Homecoming Scotland 2014 programme which include the Forth Bridges Festival, Whisky Month, John Muir Festival, Ryder Cup Concert, World Sheepdog Trials and the MTV Europe Music Awards.

From Friday 27 – Sunday 29 June, all eyes will be on Stirling as it hosts a spectacular weekend of events including Pipefest (27 June), the Armed Forces Day National Event (28 June) and Bannockburn Live (28-29 June). The weekend provides an unmissable showcase of 700 years of history, pride in our armed forces, and will create a significant tourism boost to the city and surrounding area in 2014, the year of Homecoming Scotland.