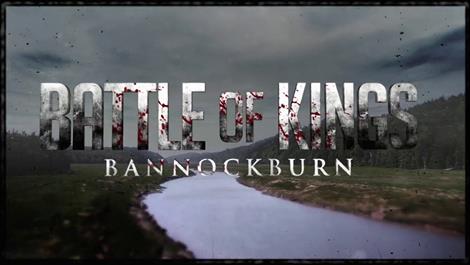 Hatfield Farm in Hammonds Plains, a bedroom community of Halifax, Nova Scotia, is normally home to a dude ranch offering horseback riding, kid’s birthday parties and weddings etc. But a few months ago, a visitor to the farm venturing into the back fields would have been startled to come across a medieval battle in full pitch. Men in armour on horseback charged at others, swinging swords and maces. What madness was this? Had a fabric in time somehow been torn, allowing these apparitions from the past to slip through?

In fact, Hatfield Farm was having its 15 minutes of fame, standing in for Scotland in a new historical docu-drama on the Battle of Bannockburn. The Halifax-based television production company Arcadia Entertainment is filming the show for History TV in the UK, coinciding with the 700th anniversary of the famous battle between the armies of Scotland and England. Notwithstanding, that doesn’t explain how modern-day Nova Scotia came to stand in for ancient Scotland.

“In the nicest way possible, parts of Nova Scotia look way more like 14th century Scotland than present day Scotland does!” declares David Glover, a producer with Arcadia. Putting all joking aside, Glover says they seriously considered live-action filming in Scotland and did, in fact, shoot all the expert interviews over there. But when it came to landscape and terrain, and to match as closely as possible the battle descriptions available from the various chronicles of the time, Glover says they found the perfect locations in Nova Scotia.

While the show is about a Scottish battle and filmed in Canada, it’s likely it will be seen globally. Sky Vision in the UK is distributing the show, while History TV owns the broadcast rights worldwide. While a firm date hasn’t been set for the premiere of the show, Glover says if he was a betting man he’d guess the release will be around June 23/24, coinciding with the 700th anniversary date of the battle. “We are confident that this story will be seen all over the world.”

Glover says the production isn’t out to tell a “definitive” story of the famous fight. “This is about the myths and legends surrounding the battle and to do this we wanted to create a dark, messy and mysterious world similar to the feel you’d get from a graphic novel. There is no doubt that this was a brutal and violent time, but there was also love, romance, chivalry, mystery and magic.”

To create what Glover is talking about, Arcadia has combined strong storytelling with large cinematic live-action moments. The goal was to come up with iconic scenes through the use of custom-built backgrounds and visual effects.

Filming got underway in September 2013 when the crew visited Scotland to gather accounts of the story of the battle from various experts. “These interviews will feature in the show and give a real unique perspective from people who not only have in depth knowledge of that period in history, but also a real passion for sharing their own take on what was one of the most fascinating events in medieval history,” Glover points out.

Then it was back to Nova Scotia to film the live action and battle scenes. On some days, Arcadia had almost 100 cast and crew working on the production. The production company brought in three specialised groups to assist with the fight scenes. Each group had specific skills that were unique requirements for the show. The first group from Scotland were the Clanranald, a non-profit trust that operates a team called Combat International. The trust dedicates its work to the creation of a medieval village in Scotland called Duncarron. The latter is essentially a living museum used to educate children and tourists about Scottish medieval life. Glover notes, “The combat team literally live and breathe medieval Scottish life on a day-to-day basis, and provided a level of authenticity to the show that simply would not exist elsewhere.”

The CEO of the trust, Charlie Allan, is also the head of the combat team and was responsible for arranging and executing the fight sequences. Twelve members of the team came over along with their manager, who looked after wardrobe and props to ensure everyone was properly kitted out. Clanranald is an unbelievable group of highly trained professional fight experts, Glover says. They’ve appeared in Gladiator, Robin Hood, Eagle of the Ninth, Valhalla Rising and Game of Thrones, among other shows. “There is no doubt that Clanranald brought a huge amount of authenticity to the battle scenes. They really do go the extra mile when it comes to knocking lumps out of each other!”

The second group participating in filming was a combined combat team from Ontario and Nova Scotia known as The Academy of European Medieval Arts. According to Glover, the men have studied the art of knights in mounted and ground combat. A medieval jousting champion, Dale Gienow, choreographed the mounted sequences, while David Cvet, founder of the academy, led the ground combat scenes. “Not only could they grind out the battle scenes with weapons, the group also contained skills in battling with horses,” Glover marvelled.

Finally, the script necessitated a third group of five combat experts from the UK, who were comfortable with and had experience with dialogue.

Of course, it goes without saying that Arcadia Entertainment has more than its fair share of Celtic staff. Glover himself was born and bred in Scotland. He notes that just among the small crew that went to Scotland to conduct the interviews, the group included a Chisholm (president of Arcadia), a Graham (the cinematographer), and a Daly (the sound technician). Glover says, “We visited many of the iconic sites involved in the Battle of Bannockburn and Robert the Bruce, so it was a particularly exciting trip for the crew to visit their ancestral homeland. Being based in Nova Scotia, it is pretty certain that the Celtic ties are strong throughout the company.”