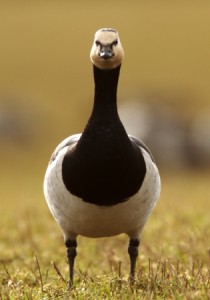 The Barnacle Geese that overwinter in Scotland represent an incredible survival story, but their future is threatened by the Polar Bears that menace their summer breeding grounds in the Arctic Circle.

It is cold and in the semi darkness my breath condenses on my face. Close to the mouth of the River Nith in Dumfriesshire I crouch behind a bank of reeds, on the other side of which lie the merse and mudflats of the Solway Firth.

A faint glow in the east transforms the clouds on the distant horizon from dark grey shapes to orange-fringed morning embers. A red fireball rises slowly and dawn’s fuse is lit. Burning daggers streak across the wet sand and from behind the reed bed there is a sudden explosion of life. A flock of fifty geese rises in the air, flies straight towards me and over my head. From my left come another fifty and from the right perhaps a hundred more. Now I lose count for they are rising all around; thousands of them streaking inland and I can hear the beat of their wings as well as their yapping call. It is winter and the Barnacle Geese are back.

The Barnacle Geese that overwinter on the Solway Firth, the estuarial water that divides Scotland from England on the west of the country, all come from the island of Spitsbergen, part of the Svalbard archipelago high in the Arctic Circle above Norway. These birds represent around 30 per cent of the total number of Barnacle Geese that visit the U.K. each year.

As Arctic winter descends, the Svalbard Barnacles start to head south towards the Norwegian coast before making the final stage of their journey across the North Sea to Scotland. From early October, in excess of 30,000 Barnacle Geese will begin to arrive at the Solway Firth. This figure represents a truly amazing conservation story, for in the years immediately after WWII the number was only around 300.

Throughout the war years, there was considerable conflict between the disparate parties that held a vested interest in the land around the Solway; wildfowlers, fishers, farmers, conservationists and the military that used the area for explosives production and testing. Barnacle Geese and other species were unable to feed undisturbed.

The great naturalist Peter Scott, founder of the Wildfowl and Wetland Trust (WWT) in 1946, was a regular visitor to the area. He worked with the landowner, the Duke of Norfolk, and the various parties to establish specific zones for the different activities based on sound conservation principles. The result was the founding of the WWT’s Caerlaverock reserve in 1970 which, as part of a wider National Nature Reserve, provides undisturbed winter grazing. Consequently, Barnacle numbers have increased dramatically.

“It is essential that the geese feed well with minimal disturbance in order to build the fat reserves that will enable them to survive winter and the long journey back to Svalbard in the spring. They may need to rely on these reserves even further when they arrive in Svalbard depending on the weather conditions.”

The WWT has been ringing Barnacle Geese since the 1960s in order to understand where they go and what their breeding patterns are. Recently, some birds have been fitted with satellite tracking devices to show precise migration routes and journey times. This data can be used to influence planning decisions regarding such matters as the location of wind farms in the U.K. and in Norway.

“The study of Barnacle Geese by the WWT is one of the longest running migratory bird studies anywhere in the world,” explains Morrell.

Barnacle Geese are a protected species and with numbers having increased a hundred fold in a few decades it would seem that all is well. Sadly, a new problem may be emerging at the other end of the birds’ migratory range.

As the geese leave in spring and return to their summer breeding grounds in Spitsbergen the worst of the Arctic winter should be over, leaving them an uninterrupted breeding season in which to raise their young. Polar Bears, which also frequent these parts, should be following the colder weather north to search out their food sources of seal and other animals, but over the last decade, warming seas and thinning ice floes have caused Polar Bears to become trapped on the islands in the summer months. To avoid starvation, the bears are turning to the eggs and young of breeding birds, including Barnacle Geese. Many of the geese are ground nesters on small coastal islands and they make easy targets for the bears. A mother bear and cub can quickly destroy hundreds of nests and eggs. Thankfully, Barnacles also breed on cliffs and these ones escape the worst of the predation. However, there are limited cliff-nesting sites and it is unclear if ground-breeding geese could ever adapt.

Morrell has followed the geese to the Arctic Circle four times.

“It may be several years before the full impact of Polar Bear predation becomes evident but this year at Caerlaverock early indications are that first-time migrant numbers are down,” he says.

As the sun climbs higher in the sky and the ribbons of geese streak further inland I wonder if the Barnacle success story can continue unabated. ~ Words & photo by Tom Langlands