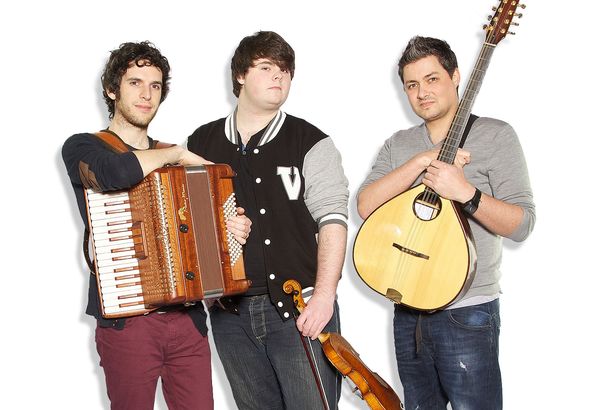 Loving the music of their island home and wanting the world to love it too is what motivates the three members of Barrule, the Isle of Man’s new trad power group. Having just launched their self-titled debut album, the young musicians are now spreading the love and touring the U.K. and Europe.

Appropriately, Manx Gaelic has pride of place on Barrule, the album, which offers diverse material, from rousing marches, jigs and reels to slow airs and ballads.

“We recorded music solely from the Isle of Man, traditional and original, so the overall theme would be Manx,” bouzouki player Adam Rhodes told Celtic Life International. “The first track, Mylecharaine’s March, is the tune on which the Manx national anthem is based and, throughout the rest of the album, we search for Manannan, the ancient God of Mann, and tell stories of the hardships the Manx people were embroiled in — from sailing the sea in the song She Lhong Honnick Mee (A Ship I Saw Sailing) to working the land in Ny Kirree fo Niaghtey (Sheep Under the Snow).”

Rhodes said that all three of the band members are united in their love of Manx traditional music.

“Even though it’s similar to the music of its closest Celtic relatives, Scotland and Ireland, Manx music has hardly been heard outside the Isle of Man. On the island, the individual musicians’ styles are quite varied. There aren’t any specific teaching styles like you often find in Ireland’s Comhaltas and Scotland’s feis movements, so the individual players tend to develop their own styles. We all feel strongly that Manx music deserves to stand shoulder to shoulder with its more famous cousins,” he added.

Rhodes’ fellow band members include accordion wizard Jamie Smith, who was born and raised in South Wales, and 19-year-old Manx fiddle player, Tomas Callister, who is also a soloist and a player with Manx group, The Reeling Stones. Rhodes was born in England, but moved to the Isle of Man at age eight. Rhodes and Smith both play with the Celtic group Mabon and Rhodes also plays with Manx band King Chiaullee.

The three first got together as a group for a festival concert in 2011, although they had played together in various capacities before that. When they decided to form a band, it seemed apt to name themselves Barrule, after a famous Manx mountain.

Rhodes said all three musicians come from families rooted in traditional music. “It’s a huge part of our heritage and culture. The more we play as a trio, and with our other projects and with other musicians, we all grow as musicians. You never stop learning.”

Recording the new work was an unusually relaxed process, Rhodes said. “Our album was recorded in a bright, spacious studio surrounded by trees on the outskirts of a beautiful Welsh town. We took our time trying to perfect the sound of each instrument, while at the same time making a conscious effort to keep the feel of the music true. We recorded much of the album live to preserve the genuine interactions between us.”

It sounds fun, but he does not find being a musician an easy job. “It’s erratic, frustrating and hard work, but incredibly rewarding. Music fulfills the soul, and the feeling of bringing joy to an audience is second to none. We’re also very lucky that through our profession we get to travel the world, seeing many places and meeting people we would be unlikely to otherwise encounter.”Rhodes believes that those who love Celtic culture should do more for it. “Despite some brilliant ideas and schemes throughout the Celtic world, more must be done to preserve and nurture our music, language and tradition. It is this generation’s responsibility to protect what we have left and keep our historical individual cultural identity. We can’t grow without our roots. We should teach more music, speak our own language and be proud of our heritage.”