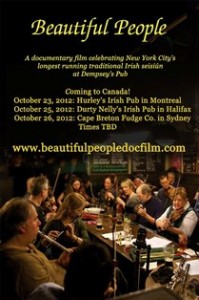 Since 1998, a group of thirty to fifty musicians gather each Tuesday night at Dempsey’s Pub in Manhattan’s East Village to participate in the longest running traditional Irish music session in New York City. The group welcomes all guests and visitors to sit in with the regulars for an impromptu jam that runs until after midnight. Director Elzbieta Szoka captures the spirit, passion, and diversity of the participants in the moving musical documentary film Beautiful People, which shows in Canada this week, including at Hurley’s Irish Pub in Montreal tonight. Recently Celtic Life International spoke with the movie’s producer Sam Adelman.

What inspired you to put this documentary film together?
Elizabeth and I were actually attending a screening for another film we had made, “Welcome to Academia,” at Anthology Film Archives on 2nd Avenue, and there was an after party for the event in the back of nearby Dempsey’s Pub. Upon entering, we had to squeeze past about 40 people playing traditional Irish music. Trying not to get impaled by an errant fiddle bow, we were immediately fascinated. It was one of those genuine, behind-the-scenes New York City moments.

What were the challenges involved?
The challenges were convincing the musicians that we weren’t crazy, that this was really worth filming. This is not an audience event, the musicians usually come alone and very few at the bar get a seat good enough to enjoy it as a performance. If you’re lucky and the place isn’t packed- about a half dozen or so are lucky enough to get a good spot to listen. The close proximity of everyone was certainly a challenge for our camera operators.

What were the rewards?
The rewards have been all these new associations for Elizabeth and myself with this wonderful community of musicians, which have developed well beyond the role of subjects in a film. It’s been a terrific thing to see how strongly the people in the film feel about this movie – which was essentially a new experience for all of them. We’re also now big fans of this type of music.

What surprised you the most when you were done?
Realizing that two ballads that we thought were traditionally very old weren’t in the public domain, like most of the other tunes we filmed. This meant we couldn’t use them free of charge, so we had to contact the songwriters in order to pay for the usual licenses. It was a joy though to get their positive feedback, and it’s given our project credibility to get the endorsements of songwriters Sean and Frank O’Meara (Grace), and John Connolly (Fiddler’s Green).

What has the feedback been like?
We play very well to companions and spouses of trad musicians, who are heroic sometimes in their patience with something that takes up a big part of their partner’s lives. “I might not like the music, but I liked the film.”

What have audiences been saying about it?
The biggest complaint, despite the fact that there are over 50 cues in the film, is that there wasn’t enough music. We try to satisfy that by including a bonus audio CD with the DVD package, which contains about an hour of music that we recorded the night of filming.

Why is it an important work for both the Celtic and non-Celtic communities?
The diversity angle interested us immediately, as neither Elizabeth nor I are Irish. Atsushi is an Asian American that plays with the group 35 times a year. Stanley is Sicilian. There are other members of the Dempsey Seisiun that span a
greater minority range, but we felt these musicians only showed up a few times and weren’t truly representative of the players that frequent Dempsey’s with the greatest regularity.

Will there be a sequel or follow-up film?
We’ll continue to update and change our very active website, where we not only have the film for sale but we have trailers, bios, and about 45 minutes of extra songs and deleted scenes. There’s also a blog for people to leave comments.

What’s next on your creative agenda?
A film that Elizabeth is directing about Tejano music legend Oscar Martinez.