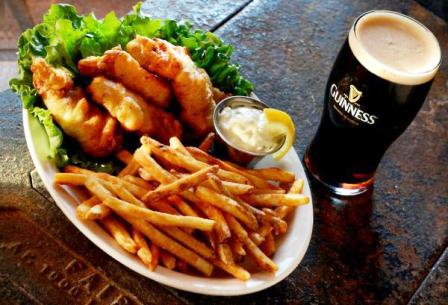 There’s something special for everyone’s taste on the Emerald Isle!

1. A fresh fish supper – eat it at John Long’s, Belfast
A philosophy of simple but impeccable fish and chips runs through this Belfast institution, which has been described by the Belfast Telegraph as “the holiest of holy culinary shrines”. Grab a space at a Formica table, order a cup of tea, and wait for some of the best fish and chips you’re ever likely to taste.

2. Home-smoked salmon – eat it at Delahunt, Dublin
Bring on one of the best fish dishes in Dublin. This is a thing of brains and beauty: lapsang souchong home-smoked salmon, served in the incredible surroundings of a converted Victorian building on Dublin’s Camden Street. It’s the very essence of contemporary Irish cooking – creative, fresh AND delicious.

3. Coddle – eat it at The Woollen Mills, Dublin
Perched on the edge of the River Liffey, overlooking the iconic arc of the Ha’penny Bridge, the Woollen Mills has a light, modern-industrial interior – a great counterpoint to a dish that dates back to the 1770s, Dublin coddle. Grab a seat upstairs at the window, look out on the rippling river, and enjoy a no-nonsense bowl of bacon, sausages, onion and potato. Honest, hearty and very Dublin.

4. Seafood chowder – eat it at Canteen at the MAC Belfast
In the super-cool open-brick surrounds of Belfast’s premier arts venue, MAC, you can enjoy one of Ireland’s most popular seafood dishes: seafood chowder. MAC’s version uses sustainable fish, and comes with Guinness and treacle bread. Come for the art, stay for the chowder.

5. Cockles and mussels – eat it at The Exchequer, Dublin
Fever-ridden Molly Malone wheeled her wheelbarrow around the Dublin streets selling these fresh local molluscs. But to dine on the cooked combination, you need to check out the Exchequer gastro pub and its gourmet version with spiced sausage, Bulmers cider and homemade bread.

6. Ulster Fry – eat it at St George’s Market, Belfast
The pinnacle of fried breakfasts, head to the St George’s Market Bar and Grill in the city centre to taste an award-winning plate of sausages, bacon, potato farl, tomatoes, black and white pudding, and eggs. The secret? It’s all cooked in the same pan to let the flavours run riot. A winner, every time.

7. Slaney River slow-roasted lamb – eat it at The Vintage Kitchen, Dublin
Snuggled into beside Mulligan’s pub on Poolbeg Street is the Vintage Kitchen, a veritable mecca for Dublin’s foodies (such is its popularity, you must book well in advance for a weekend sitting). Bring along your own booze, bring along your own vinyl and enjoy an exemplary dish of Slaney River slow-roasted lamb. Delicious.

9. Boxty – eat it at O’Holohan’s on the Barge, Belfast
Like the sound of expertly prepared Irish food in a gorgeous environment? Then climb on board O’Holohan’s, moored at the Belfast Waterfront. This restaurant-on-a-barge is famed for its boxty: a traditional potato pancake, which it serves with pan-fried hake, organic veg and shellfish cream.

10. The Waterford Blaa – eat it at Hatch & Sons, Dublin
Waterford locals love their ’blaa’ – a soft bread roll introduced by the French Huguenots in the 17th century. Paired with dry-cured bacon, it’s a real delight. To try one in Dublin, head to the Georgian kitchen-café of Hatch & Sons on St Stephen’s Green. Go old school with rashers (strips of bacon), or take it upscale with spiced beef, rapeseed mayo, Coolea cheese and onion relish.