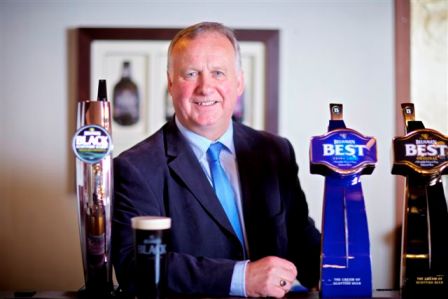 Since 1719, Belhaven Brewery has produced fine beers in Dunbar, Scotland. Today the maker of Scotland’s favourite beer, Belhaven Best, ships its ales and stouts across the globe.

Head Brewer George Howell is the creative mastermind behind some of the brewery’s renowned products, such as the Belhaven Black – with its strong notes of chocolate and coffee – or the 2008 World Beer Champion Belhaven Scottish Stout. He is also the concocter of this year’s new specialty craft range: Scottish Oat Stout, Scottish Ale, Craft Pilsner, Speyside Oak Aged Blond Ale and Twisted Thistle IPA.

An interest in science led the Edinburgh native to study microbiology at university. From school, Howell took a position at the Heriot Brewery in 1974. After two years he was running their laboratory.

“My entire life I’ve always enjoyed beer, so that probably had something to do with getting into brewing,” laughs Howell. “I’m very, very pleased I did that because the brewing industry has certainly been very good to me over the years.”

In the ‘80s Howell began to shift his focus from the lab into production management. He also pursued Master Brewer certification through the Institute of Brewing & Distilling. He attained this distinction in 1989, after several years of dissertations, exams and hands-on experience in every aspect of the industry.

His hard work paid off. Howell joined Belhaven in 1992 and a year later he was promoted to Head Brewer. “I take great pride for having created some new beers over many years,” he says. “It’s great when you actually produce something that goes to trade and somebody goes out on a Friday night, puts their hand in their pocket and spends their hard-earned money to buy your product.”

Howell enjoys the camaraderie that exists in the brewing industry and is impressed with Belhaven’s staff who roll up their sleeves to create quality products. Howell also holds dear the brewery’s rich history.

“We don’t live in the past—we have a very modern brewery—but it was Scotland’s oldest, surviving brewery and we still brew on the same site as when it started in 1719,” he says describing the gorgeously preserved buildings set in the “Grain Basket of Scotland.”

Howell notes that Belhaven makes a point of using the purest of ingredients, including waters drawn from the original 18th century onsite wells and the finest local Scottish barley.

“We also carefully preserve our very own yeast culture, which has been in use for a long, long while, and certainly is one of the dominant factors that creates the Belhaven flavour and House characters,” Howell adds. “It’s protected and held in a yeast bank and we grow fresh cultures off it every few weeks.”

Due to increasing demand, Belhaven recently invested one million pounds into upgrading its brew house to augment production. Princess Anne came to tour the revamped facilities last January. “That was a fantastic day and one for the memory bank, I have to say,” says Howell. “Certainly the new brew house will make sure that Belhaven Brewery is around for a long, long time.”

At 61, Howell acknowledges that some day he’ll have to pass on the reins. For now, he continues to set foot in the brewery every day. Each morning Howell and the trained flavour profile team gather in the lab to check each beer.  According to Howell, while each brew has its own scientific parameters, the human senses of sight, smell and taste are the critical test.

Howell admits his favourite Belhaven beer is the malty and “biscuity” Scottish Ale, which has been exported to the U.S. for over two decades and is just one of the brewery’s internationally popular brands. “But when it comes to beer, I’m really quite promiscuous,” he laughs. “I enjoy many, many different types!”