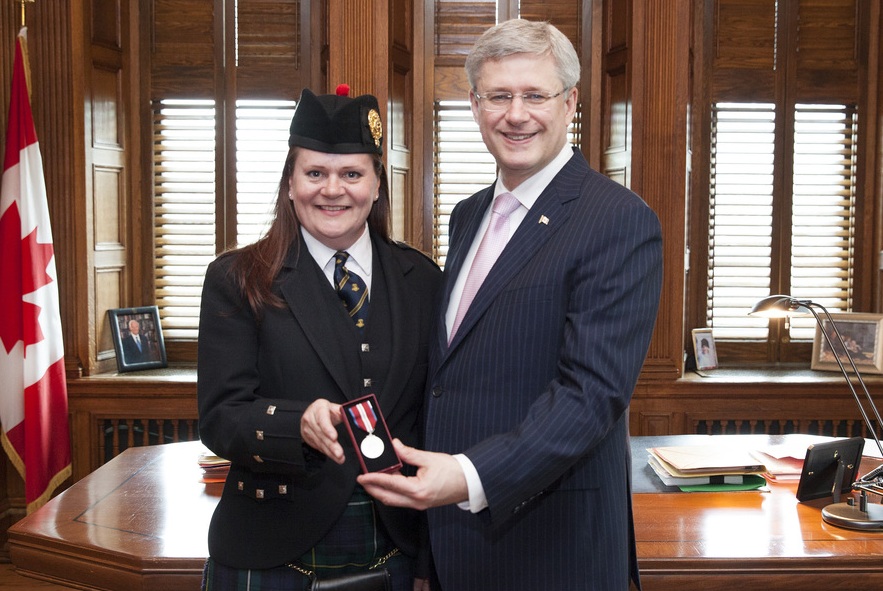 By now, Bethany Bisaillion must be comfortable around royalty; after all, the piper has met them often enough. In 2005, she and The Sons of Scotland – the pipe band she leads – played before Queen Elizabeth and Princess Beatrice at Balmoral Castle. In 2011, the band performed for the Duke and Duchess of Cambridge, Will and Kate, at a citizenship ceremony at Ottawa’s Museum of Civilization. And in 2013, The Sons of Scotland again played for the Queen at Balmoral Castle.

Despite her hobnobbing with the Royals, Bisaillion is not a monarchist, she told the Chatham Daily News back in 2011. “It’s come my way because of opportunities that have come up to play with the royal family,” she said. But she has helped make those opportunities happen. In 2013, CTV News wanted to know how a piper came to pay before the Queen not just once, but twice. The piper told the news network the she wrote the Queen and asked. “All it took was another letter in the mail,” she said. “So the long-lost art of letter writing is not lost on me.”

Of course, it helps if you have dollops of talent as well. In recognition of that talent last spring she received the Queen’s Diamond Jubilee Medal from Canadian Prime Minister Stephen Harper. Bisaillion, who’s been playing pipes for 36 years, comes by her talent naturally. Growing up in Kanata, Ontario, she became the fourth in her family to play, after her father and two older brothers. By the time she began playing at the age of nine, Celtic culture was already deeply ingrained in her; she’d been Highland dancing for six years already.

She attended the summer school of the College of Piping in Timmons, Ontario, and during her last year at college was asked to teach, which introduced her to the world of pipe majoring. Bisaillion played with a number of pipe bands before joining The Sons of Scotland 13 years ago as their pipe major. The band itself is the oldest civilian pipe band in Canada, dating back to 1896, according to CTV.

But if The Sons of Scotland have the weight of history behind them, that doesn’t stop them from rocking out. They are the first pipe band to play at the legendary New York punk club, CBGB’s, and because of Bisaillion’s influence they have played punk and hard rock numbers during performances. “I enjoy all genres of piping music, but tend to listen to rock music and translate that to pipes much more often,” she told Celtic Life International. Generally, she has played on 15 CDs herself. Beyond a little heavy metal piping with The Sons of Scotland, she is the director of the Ottawa City Piping College.

For the endlessly energetic piper, 2014 is shaping up to be a busy year. She foresees travelling to Scotland and Ireland with the band, opening up a Celtic centre and charity in Ottawa, and continuing to teach. Most immediately though is Tartan Week. Bisaillion was named to Tartan Week Alliance’s board and will join members from the United States and Scotland as they raise awareness to the various events being held globally.

On Sunday, April 13 the pipe band will celebrate Tartan Day in Ottawa on Parliament Hill, where they record all the tartans worn that day. As to whether there are any more royals in Bisailion’s future, only time can tell.