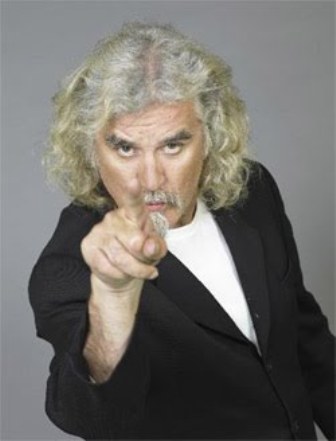 After nearly 50 years on the stage and screen, Billy Connolly has been around the block a few times – but his heart remains where he was born and bred.

Folk singer, comedian, raconteur, traveller, movie star… Billy Connolly is all these things and more. A truly likeable and engaging orator, The Big Yin might just be the most famous Glaswegian on the planet.

“If someone wants to think that, I’ve no problem!” laughs the former shipyard welder who, now 70, achieved global success through his folk singing and stand-up comedy. Indeed, helping people raise a smile remains his favourite pastime despite notching up an impressive string of movie roles since his breakthrough performance in the 1997 drama Mrs Brown, alongside Dame Judi Dench.

Earning a BAFTA nomination for his portrayal of Queen Victoria’s favourite servant, John Brown, Connolly went on to take a variety of roles, including that of a pet zombie in the hilarious and underrated Fido. There followed a priest with a dark secret in The X Files and, more recently – and alongside an esteemed cast including Michael Gambon, Pauline Collins and Maggie Smith – a place in Dustin Hoffman’s directorial debut, Quartet.

Connolly admits he finally now has faith in his big screen appeal. “I’m 70 and it has taken this long for people to take me seriously,” he laughs…“myself included!”

Connolly famously left his beloved Scotland for the States some 30 years ago, but he now spends much of his time at his home in Strathdon, Aberdeenshire.

So what was it that pulled him back? “At the time when I left, I needed a break,” he said. “I think many people go through that mentality of getting away from home. It was a million things that led to my departure. I wanted to get away from the media over here, have a clean getaway, and America represented that for me.

“I have homes in New York, Malta and Aberdeenshire and because I’m moving around so much, people wonder where I consider home. And I have thought about that; I’ve pondered that. And of course, it’s Scotland. I probably spend more time in New York, but that’s more to do with the fact that I’ve children who live there. Those kids are, technically, American themselves, I suppose. But it’s very special up in Aberdeenshire. You can do all your battery recharging there and when I head up to the west coast, I get this tingly feeling – it’s this feeling that that’s where I belong. So that’s where I call home.”

Indeed, for all his globetrotting, Connolly is still a passionate devotee of the Celtic way.

“I guess I need to ask myself if I’ve preyed on that through my comedy, and I don’t think I have. My comedy isn’t so much about nationality, it’s about humanity, and that’s important to me.

“What I have relied upon though is the confidence that being Scottish has given me. I’ve always felt it’s an edge, and it’s carried me through life, serving me well. And I’m delighted it has been like that.”

Connolly has recently been in New Zealand shooting the next instalment in Peter Jackson’s Hobbit trilogy, The Desolation of Smaug. The actor and comedian takes on the weighty role of dwarf warrior king Dain Ironfoot, alongside Sir Ian McKellen, James Nesbitt and Martin Freeman. This is arguably his biggest film yet, but none of the success seems to have gone to his head.

“How on earth did I make it this far? It’s the world’s longest running joke!” he laughed. “I think I’ve been very lucky, very blessed particularly that I had the chance and choice to try so many different things out. Music, stand-up, movies – it’s been extraordinary.”

Although he is surely best known for his caustic, meandering (and expletive-laden) stand-up comedy routines, as an actor he has gone from strength to strength. In the last two years he has crammed in Gulliver’s Travels, Disney voiceover project Brave and The Hobbit…“Aye, I’ve had a great couple of years, the time of my life! The Hobbit was a dream job to get. I love travel and getting to stay down in New Zealand, playing this warrior dwarf with a red Mohawk, hair down to my backside… well, that was wonderful! Two-and-a-half hours every morning getting done up and when I saw myself as a dwarf on screen, after all the effects, I was blown away. Absolutely splendid – you’ve never seen nothing till you’ve seen yourself as a dwarf!

“And my costume is mostly armour – it’s absolutely fantastic. I’ve got tattoos running up the side of my head. I was desperate to go for a walk in Wellington dressed like that. I even wanted to come home looking like that, adopt it for myself, but Peter Jackson was having none of it.”

With an all-boys cast including Sir Ian McKellen, James Nesbitt and Martin Freeman, it must have been a lot of fun on set?

“Ah yes, constant laughter and ribbing and joking. It’s like being back at school with those lads, like you’re on a class trip. And Jimmy was the biggest laugh on set, and he knows great songs. You know those Irish traditional songs with big fights in them – he knows every syllable of them and he’d always be singing them in between takes. All of us would be cracking up. He is the greatest comedian. He should have gone into live comedy. I think he missed his calling there.”

For his voice work in the beautiful animated tale Brave, Connolly was moved by its portrayal of his home soil. “Isn’t it a beautiful, gorgeous film? My heart sang when I saw it, the colours and the way it painted the Highlands. Of course I was so proud when they asked me to be King Fergus. It’s one of the films that will be watched again and again, but when you’re doing something that’s reflective of home you give it absolutely everything you’ve got.”

In Dustin Hoffman’s Quartet, Connolly found himself among some of the finest acting talent around, which he says was a daunting proposition but one which helped to raise his own performance.

“The story, about these retired opera singers living in a nursing home, really intrigued me. But when Hoffman told me who was in it, I wanted to say ‘no’. I was scared I wouldn’t match up. But I remember working with Judi Dench and realizing how these sorts of people bring out the best in you. So I said, ‘yes, let’s do it’.”

Joining stage and screen legends Maggie Smith and Michael Gambon wasn’t nearly as nerve-wracking as Connolly had thought it might be. “I never worked with Maggie before, and if I’m honest, she scared me a bit,” he smiled. “I knew she was formidable and I was genuinely a little nervous to meet her.   But she was incredibly lovely and charming. I thought I heard stories about Gambon being difficult and hard to work with and nothing could be further from the truth.”

We already know The Big Yin can sing, but can he sing opera? “There’s a scene at the end where the quartet gets together for their first performance in years, and we actually underwent extensive singing training for this scene,” he recalled. “We performed it for Dustin, and he wept with joy. He was astounded so we can’t have done a bad job!”

Connolly is soon returning to the stage to do what he does best–making people laugh. “It’s what I started out doing. I guess it’s nice to come back to what you know,” he said.

However, there have been a few hiccups in recent times – Connolly has twice fended off criticism for chastising audience members for disturbing his act. “It was just those two incidences where a few audience members annoyed me and I just thought, ‘Forget this, I’ve had enough’,” he explained. “I’m not in the habit of doing that and I’ve thrived off audience participation for my entire career. But when somebody keeps interrupting you or there are so many bodies moving in and out of the theatre, it’s distracting and it drives me mad sometimes.”

Although his trademark style of going off on tangents for an hour or so before coming back to his original point means most people probably won’t notice, Connolly identifies a stumbling block: “I’m starting to have problems with remembering things too. It’s getting worse,” he said. “When you’re nervous, you forget everything. I get blanks all the time now, although it’s usually as I’m about to go on. I forget everything I’m supposed to do and just think ‘what am I going to say to these people?’ But when I go out, I become the other guy, thankfully…”