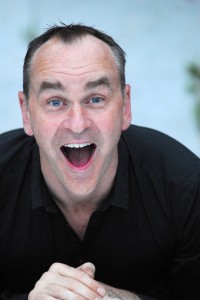 Audiences in Halifax, Nova Scotia are in for a theatrical treat this fall, as Daniel MacIvor’s Bingo! takes the stage at the Neptune Theatre from October 16-November 4.

The story of five former class-mates, who gather at Sydney, NS-area hotel on the eve of their thirtieth high school reunion, and starring renowned singer and actress Heather Rankin, is being heralded as both humorous and heartfelt – perhaps a knowing nod and a wink to the playwright’s Scottish / Cape Breton roots.

The writer notes that the warm, witty work found its footing in Atlantic Canada as well.

“I remembered a conversation I had with my old friend Steve MacDonald and his partner Debbie Corkum in their kitchen in Cape Breton about trying to make work for an east coast audience that would really speak to them in a lighthearted but true way, and I had an idea about a thirty year class reunion and I immediately thought of the title Bingo!. The next morning I came into the kitchen and Steve had already made the poster and put it up on his fridge. It felt like something real already. Within a week I had the first draft of the play.”

Both MacIvor and Rankin believe that the production highlights their rich Celtic heritage.

“We’re all storytellers in Cape Breton, and I think that is basically true of any island people,” explains the author. “When the borders of your world are not political or simply lines on a map, but rather the end of the land and the beginning of the ocean, we see things in a unique manner; we understand how the light exists in the darkness and we look inside ourselves and into our own stories in a different way than the rest of the world.”

Rankin both echoes and adds to the sentiments.

“Growing up in Cape Breton there is a strong sense of rootedness in place. Relationships with the people in our community cross the generations and run deep. Oh yes, and I should mention the wonderful sense of humour. We are able to laugh at ourselves and make light of the darkest times.”

Despite their common creative legacies and Celtic lineage, Bingo! marks the first time that the pair has collaborated on a production.

“It’s been an honour working with Daniel,” says Rankin. “I’ve seen a number of his films and I’ve read many of his plays and I am a big fan. I effortlessly connect with his writing. Having the opportunity to work with him has meant a great deal to me. I still pinch myself. I owe a great deal of gratitude to him, and I have been in very good hands from the get go. He has that ability to give very clear direction while still allowing you to explore how you might approach each scene. He’s a very clever man.”

“Heather is a superstar,” replies the scribe. “She’s one of those people who is so confident in front of an audience that you can’t take her eyes off her. And while she’s a born performer, she still has a genuine and totally honest access to her heart. And not only that she is one of the kindest and most generous humans I have had the pleasure to meet.”

That chemistry will likely result in performances that will engage, entertain and enlighten audiences.

“Bingo is a funny and warm and touching piece, and everyone will connect differently with the various characters,” smiles the starlet.

“Attendees can expect a full evening,” adds MacIvor. “There will be lots of laughs and likely a tug on a heartstring or two.”