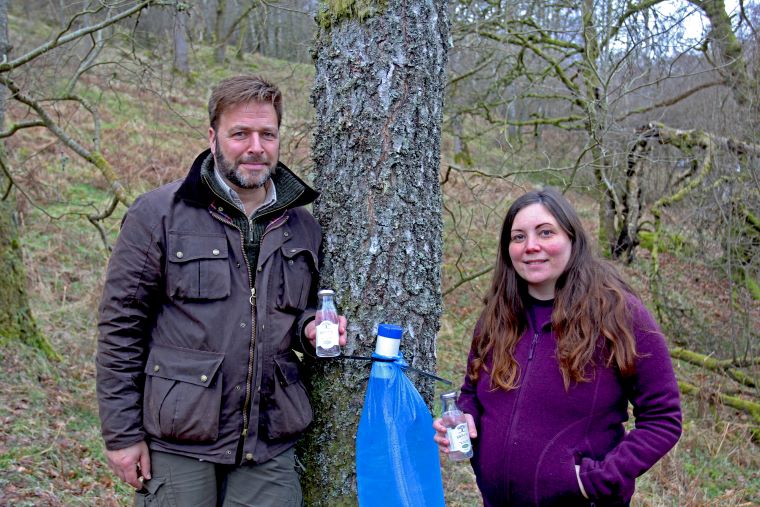 When Rob and Gabrielle Clamp realized that no one was commercially practising the ancient Highland tradition of tapping birch trees, they decided to start doing it themselves.

Rob, who was born in Caithness, has been a professional forester his whole working life. He has made his way throughout the Scottish Highlands and islands, “leading on many reforestation and woodland management projects.” His wife Gabrielle, on the other hand, is originally from France. Her background as a chiropractor and healer blends her understanding of human biology with spiritual and plant-based therapeutics.

The couple – now based in Perthshire – founded Birken Tree just over a year ago. Their respective professional backgrounds provided the perfect combination of knowledge to market Perthshire birch sap and, in doing so, they resurrected an age-old custom.

“We have found records of the use of birch sap in Scotland going back over 5,000 years,” shares Rob via email. “In historical times, Highlanders would use the spring sap from birch trees as a tonic after long, hard winters. There are over 100,000 hectares of native birchwood in Scotland, present since the last ice age.”

Highland birches, which form part of the northern boreal forests, stretch from Canada, through Scotland and Scandinavia to Siberia.

“Just standing in an ancient Highland birchwood that you know has been here since the last ice age, and feeling its presence and antiquity, is very powerful,” he continues. “There are traces of ancient peoples, too, with Mesolithic standing stones, cup-marked rocks, ruined crofts and more.”

Rob works on finding the best birch trees. Although there are plenty of birch woodlands in Scotland, many of them are very remote or difficult to access. Gabrielle handles the financial and administration side of the business. 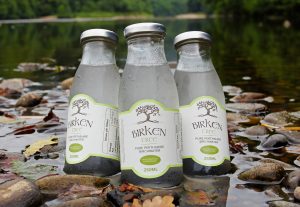 “We also have a mandate to promote the management of native birchwood and to demonstrate its importance in traditional culture and how productive and sustainable it is,” notes Rob.

“We then quickly realized the diversity of things that can be produced from birch,” says Rob.

“Birch is the most health-giving tree, with the sap, leaves, bark, twigs and buds all being used traditionally in folk remedies.”

The couple has plenty of plans for future Birken Tree product lines, such as flavoured and sparkling varieties of Birchwater. For now, however, they offer three products, including their original Birchwater.

“Birchwater is very good for skin, hair, immune system and detoxing,” explains Rob. “We make birch leaf tea which is good for the digestive and urinary systems. We also produce chaga tincture made from a very special and hard-to-find fungus which grows on Birch trees and is highly prized for its potency in helping restore immune systems, combats inflammation, and is good for arthritis and rheumatism.”

Getting the goods can be a tough and tiring job, requiring a long walk up a steep hillside or wading through thick vegetation. Fortunately, they have a strong network of friends in the forestry trade to help them during the harvest.

“The nature of much of the harvesting of our raw materials can be quite physical. We tap and collect all our Birch sap by hand, usually on the side of a steep Perthshire hillside! We also collect birch leaves, chaga fungus, and we forage for wild berries such as cranberry, blueberry and juniper.”

In addition to their online shop, the couple constantly attend markets, Highland Games, trade fairs and tasting sessions to promote their business and its benefits.

“Birchwater is a very versatile product, so we make sure we are creative and innovative in how we demonstrate its many uses. It can be used for everyday drinking, detoxing, for cooking with, and for mixing with whisky or other spirits.”

While other brands make products with birch sap deriving from Latvia, Finland and Russia, Birken Tree is the only company using sap from Highland birch trees.

“Our other point of difference is that we preserve as much of the goodness as possible in order to pass on the health benefits to our customers.

“Since the Highland Clearances in the 1700s and 1800s, a connection with the natural world has been broken. The vast depopulation that ensued saw much of the folk knowledge disappear, so we feel proud to be able to help in our small way to revive this.”