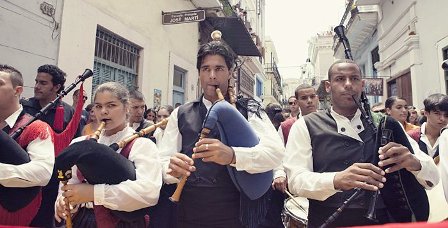 It seems everyone can sing and dance in Cuba, and in every community musicians fill the air with melodies. Musicians are honoured and appreciated, and their songs transcend the daily struggle of life, bringing happiness and hope, joy and smiles to the Cuban people.

A student can study music for free in Cuban schools. There are always more players than available instruments, so they must share; very few young musicians are lucky enough to own an instrument.

Recently I went to Havana with two violins, each donated by Ontario fiddler George Wathke. He had the pair stored in a closet for years, and after hearing of the need for instruments in Cuba, sent them with me.

Cape Breton fiddler Chrissy Crowley accompanied me on my trip. We reconnected with our Celtic musician friends at a session in Old Havana, where I played one of the donated violins alongside the Cuban pipers and fiddlers. Despite being silent for many years, the violin had a beautiful voice. At the session was a young university professor and piper, Abel Fernández-Larrea Berriz, who mentors many young people in the music of Asturias, the Celtic nation in Northern Spain.

Chrissy and I had attended a concert of Asturian music earlier in the day. We watched young dancers dressed in colourful traditional costumes move gracefully to the music of the gaiteros (pipers) and drummers. I gave the donated instrument to Abel so his group could perform the folk music of their Asturian heritage with the fiddle.

Chrissy had brought four bows from Canada. I took the second violin and the bows to a popular microbrewery in a restored colonial building facing Plaza Vieja, one of Havana’s historic town squares. On the second floor is a workshop where artisans make beautiful stringed instruments. There, we met Juan Carlos Prado, a piper and craftsman, and gave him the violin.

The fiddle needed some minor repairs, and the bows needed to be re-haired, all of which Prado could easily do. Soon the fiddle and bows would be in the hands of eager Cuban students. Prado showed us a beautiful viola he had made. Chrissy played it, and the low warm tones resonated throughout the shop. Prado had created a work of art.

Prado is also a piper and had made three gaitas (Spanish bagpipes). He showed us the beautiful pipes, and he and another Cuban piper – Alexander Suarez Mendez – performed later that afternoon at the oceanfront. Like many Cubans, Prado has Galician ancestry. He played traditional Spanish tunes on his gaita. Mendez performed tunes on his Irish pipes, a gift to him from Gay McKeon of Na Píobairí Uilleannan, an organization in Ireland that preserves and promotes traditional Irish piping. McKeon travels to Cuba annually to teach the young Cubans. The pipers have not only learned technique and tunes from McKeon and other volunteers from Ireland, they have also learned how to make pipe reeds.

In Cuba, cane used to make the reeds is widely available. My husband Charles assembled a tool kit with chisels and other tools from Canada for Cuban Uilleann piper Luis Gutierrez. Gutierrez and Mendez are now making reeds in Cuba and no longer need to rely on imported reeds, which are problematic to find.

After seven days, Chrissy and I had to once again say goodbye to Havana and our Cuban friends. It is always tough to leave, but at least our luggage was much lighter.