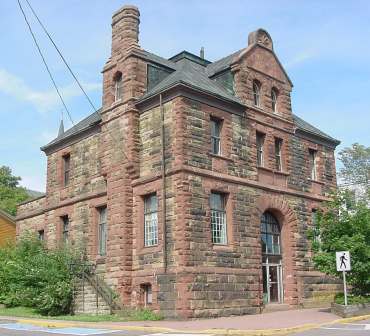 Early builders often favoured the use of sandstone because this choice permitted close imitation of the late Georgian styles that Scottish immigrants had left behind. One of these builders, a stonemason named John Lorrain, has left his legacy in houses that are recognized as heritage structures. Now, research into Lorrain’s history has uncovered his progress and problems in a new land.

A native of Dumfriesshire, John Lorrain (1786-1840) was just one of the stonemasons to come from the Scottish county, among them writer and philosopher Thomas Carlyle, engineer Thomas Telford and journalist-author Allan Cunningham.

In 1816, Lorrain decided to emigrate to Pictou with his wife, Margaret Bell, and their children, including their son George who had trained in the mason’s craft with his father. It appears that Lorrain had contacts in Pictou for no sooner had he arrived than he was engaged to do mason work on the new court house and jail. Records indicate that over the next two years John also began to construct his own sandstone house on Church Street. He appears in the Court of Sessions (1819) among the town officers as a hogreave (a person who looked out for wayward hogs that had left their owners’ properties) and was granted a tavern license. That same year, he purchased the land on which his tavern was built, becoming the well-known John Lorrain’s Tavern which served as an inn and housed the Masonic meeting hall.

Over the ensuing years, Lorrain hosted many government and public travelers, as well as St. Andrew’s Day celebrations. In Lorrain’s own words, the inn “can warrant the most genteel and comfortable accommodations” (1832). In 1820, Lorrain, along with four other men, became constables and holders of tavern licenses – an early example of self-regulating businessmen. He also served as a Second Lieutenant in the 1st Battalion of the Pictou militia.

Lorrain’s two-and-a-half story stone house with its five-sided (“Scotch”) dormer windows remains impressive today. The interior must also have been impressive judging from an advertisement Lorrain placed in 1829 when he leased the lower level and listed five fire places, a frost-proof cellar and front parlours. That year, Lorrain also had to place a newspaper notice for a “Smart active Lad as an Apprentice to the Stone Cutting and Mason trade” after his previous indentured boy, 16-year-old William Edmond, ran away. It was a bad summer for absconding apprentices in Pictou; William Ward, 16, and William Fraser, 15, were both posted in the Colonial Patriot newspaper by their masters who stated that the boys were runaways and offered rewards for their return with warnings not to harbour them. Lorrain’s former apprentice Edmond is later listed as a miner in the 1838 Census working in nearby Egerton Township – a trade which can hardly have been less rigorous than that he studied under his former master.

Lorrain did not only work in Pictou. In 1833, he built a cottage with two Scotch dormers at Lower Gulf Shore in nearby Cumberland County, including an engraved lintel over the main door with the date and initials of the owner (Hebridean-born mariner Murdoch Nicholson.) Lorrain’s son George probably assisted in this work. Sadly, George outlived his father by just five years, dying in Charlottetown on nearby Prince Edward Island in 1845. Another son of Lorrain’s, William Johnston Lorrain, became a successful Pictou merchant and tax collector. William’s wife Margaret Ramsay was from Charlottetown and one wonders if her father David knew George. Two of John Lorrain’s daughters married locally, becoming Margaret Gourley and Anna Bell Skinner.

The final note on the legacy of John Lorrain comes from an advertisement he placed stating that he carved headstones “for sale on reasonable terms”, suggesting that there are probably stones with his initials on them in Pictou County. His and Margaret’s own tombstone is in Pictou’s Laurel Hill Cemetery. Lorrain built for the living and the dead, and his Dumfriesshire craftsmanship remains to be admired.