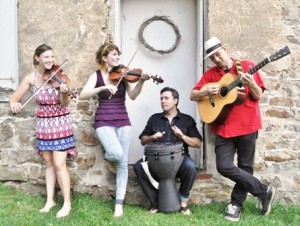 Once called “the Allman Brothers of Celtic fiddle bands, only prettier”, Pennsylvania’s Burning Bridget Cleary features the remarkable musical talents of Rose Baldino and Deirdre Lockman, who lead the 4-piece band with high-energy and tightly woven harmonies in both fiddle and vocals. Recently Celtic Life International spoke with the ladies about their vocation.

What is your own background/ethnic heritage?
Rose: I’m mostly German, English and Italian, though I did have a grandfather that emigrated from Scotland in the 1700’s. I guess we are typical “melting pot Americans”.

Deirdre: I’m half Irish with relatives still in County Down and a mix of Polish, Lithuanian, and Austrian.

When and why did you start playing music?
Rose: I started playing violin in public school in the 3rd grade and when I turned 12 I realized I wanted to play fiddle style and not classical. My mom saw an article in the local paper about a family of Irish musicians, called “The Lockman Family Irish Musicians and Dancers.” She decided to call and see if anyone could give me Irish fiddle lessons . . . and that’s when Deirdre actually became my fiddle teacher for a few years. She was 14 at the time.

Deirdre: I grew up in a musical family and I started taking classical lessons when I was 4. My first violin teacher was also an Irish musician and started teaching me Irish tunes when I was 5. I began performing with my family a few years after that.

How long has the band been around?
Rose: The band formed in 2006, and with my Dad’s help, we produced our first album that year. Pete, our drummer, joined in 2008 and Deirdre just joined the group a year ago.

How has the group evolved since that time?
Rose: The group has evolved greatly over the last 7 years. We have definitely matured in our sound, which makes sense, as I was only 16 when the band began. We’ve been able to connect and play with a lot of other musicians along the way, which has helped us expand our repertoire and develop our sound. We started out as a trio, and were almost completely instrumental in the beginning. Now, we have a drummer, we sing, and sometimes incorporate other instruments into the mix. Also, we have been lucky enough to showcase at a few Folk Alliance and Celtic Music conferences. That has been really helpful in getting our band name out there and making connections for gigs.

Why the decision to start performing Celtic music?
Deirdre: It was really my first teacher who got me into Celtic music, although my mom’s family is from Ireland. My dad isn’t Irish, but he really loved the music and often brought me around to sessions and really got me involved in the Irish music community.

Rose: I really got into the music when I started taking fiddle lessons with Deirdre. I kind of just fell in love with the music and started going to traditional music sessions, as well. After I learned a bunch of tunes, my Dad started to back me up on guitar and we played some small community festivals and living history events together. It wasn’t long after that we sent a demo into a local Irish festival and, as a result, the band formed.

How would you describe your sound today?
Rose: It’s a mix of high-energy traditional Irish music with a twist. We often add in some contemporary numbers as well as some originals, but the main focus is on the double fiddle sound that we’ve created with our tightly-woven harmonies. We often write original fiddle melodies that are used as interludes.

Where do you typically perform?
Deirdre: We perform at a lot of Celtic and Folk festivals in the spring/summer/fall seasons and we also do shows like monthly music series during the winter. This year we are excited to be expanding our touring to the south and mid-west.

What is the response like from audiences?
Deirdre: People typically love the music, even if they don’t have an Irish or Scottish background. At festivals, the audience is often dancing and clapping, and we try to engage the audience as much as possible, because the music is very community-based. Generally, everyone is very responsive. We see lots of smiles and that’s really what keeps us going!

What have been some career highlights?
Rose:  Having the opportunity to play with other musicians during festivals and the after-party sessions is some of the greatest fun! Each gig is a unique experience, but some career highlights would definitely include playing The Celtic Classic, the Celtic Fling, and the Philadelphia Folk Festival. In May, 2011, the band travelled through Ireland with a busload of fans, playing at venues in each town – that was a blast, but we didn’t get much rest, were sick by the end of the week. We would definitely pace ourselves better next time. Also, the release of each of our albums is always very exciting. We just came out with our fourth full-length album, which we’ve worked very hard on for the last year. We have two CD Release parties scheduled this weekend so we will celebrate with our fans and bring cake and a champagne toast. Radio interviews are always fun, too. We’re looking forward to recording/playing more in the future and adding even bigger and better career highlights!

What does the band have on tap for the rest of 2013?
Rose: We have two CD release parties coming up to celebrate our new CD, “Pressed for Time”, which we’re super pumped about. They are at Godfrey Daniels, a hotspot for folk music in Bethlehem, PA on June 1st. The other is at World Cafe Live in Philadelphia, PA on June 2nd. Also, we are working with Charterhouse Music Group to do a radio promotion campaign for the first time with this CD. Yesterday, we sent hundreds of CD’s to stations in the U.S., Canada, the U.K., Australia and New Zealand. So, we have our fingers crossed that programmers will like it and we will be heard more across the airwaves with this release. For gigs, we are looking forward to the Celtic Fling, the Bethlehem Musikfest, The Philadelphia Folk Festival, The Buffalo Irish Fest, among others. We’re also starting to travel more, and we’ll be at the Michigan Irish Fest, Kansas City Irish Fest and the Bristol Rhythm and Roots Reunion in Tennessee for the first time this year.

Is enough being done to preserve and promote Celtic culture?
Deirdre: I think that we are lucky enough to have grown up surrounded by traditional Irish/Scottish music and I think there seems to be a renewed interest in the music and culture by younger generations. That being said, I think that people in general have a distorted sense of what Irish music and culture actually is – and hopefully younger people will start to take interest in the roots of the music, and the older traditions and stories that are being forgotten.

What can we be doing better?
Deirdre: Just spread the word! Bring your friends and family out to Celtic music performances, highland games and festivals. Let the music and the camaraderie get under their skin.