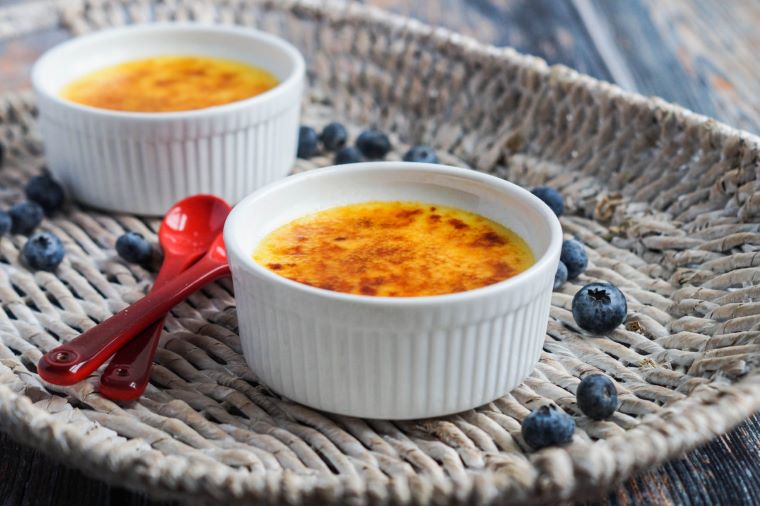 Brunt cream – aka Crème Brulee – has always intrigued me, and – as a chef – I call this dish Burnt Cream on menus. I was once told that the French and the Scots have argued the origins of this dish for centuries, but Cambridge University might have an even stronger claim than anyone. One thing is for sure – this dish has been very popular in Scotland for centuries. I have included two methods for this, one is cooked in the pan the whole way, while the other is oven baked.

Pre heat oven to 150°C / 300˚F. Place the cream, vanilla extract, orange peel, and a pinch of cinnamon into a thick bottomed pot and slowly heat up. Whisk egg yolks and sugar together until the yolks lighten. Remove the orange peel from the cream. Add the half the warm cream to the egg yolk mix, then pour this mixture into the rest of the cream. Place in ramekins/dishes into a shallow tray. Carefully fill the tray with water. Place the tray into the oven for 30-40 minutes until they have set – they should have a little wobble but once cooled completely they will set. Once cool, place into the fridge until needed. To create the crunchy caramel topping, sprinkle a thin layer of castor sugar on top of the set cream. There are a couple of options on how to melt – I use a blow torch, but you can also use a Brulee iron if you have one or under a very hot grill/broiler.

Place the cream, vanilla extract and a pinch of cinnamon into a thick bottomed pot and slowly heat up.  Whisk egg yolks and sugar together until the yolks lighten. Remove the orange peel. As the cream comes to a boil add half the boiling cream to the egg yolk mix then pour this mixture into the rest of the cream and put back onto the stove. Carefully stir the mix until it starts to thicken – it should start to resemble thin custard. Once it coats the back of the spoon pour the mixture into a large jug or bowl. This instantly stops the cooking. Pour this mixture into your ramekins/dish, and once cool place into the fridge to set.