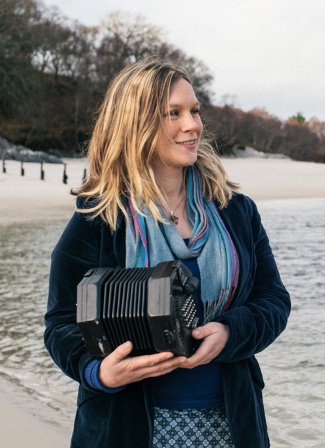 Up to eight or more single men would have slept inside a bothy after a hard day’s work in the fields on farms in northeast Scotland. During their free time, the farmers would play music and sing songs about rural life, strict bosses, the beautiful “plooman ladies” and other themes.

“A large collection of bicycles outside the Bothy meant visitors and this indicated a Ceilidh,” Jimmy McGregor described, on a BBC Scotland on Film forum, recalling childhood winter evenings on a farm in the North East. “Gliding quietly in, music would be in progress, tin whistle, mouth organ, melodeon, Jews harp, and this would be interspersed with Bothy Ballads…many of which I sing to this very day.”

McGregor’s experience is an example of the musical heritage celebrated at the Button Boxes and Moothies festival. The upcoming event, hosted by the Elphinstone Institute at the University of Aberdeen, takes place November 6-8.

“It’s an incredibly important event for Aberdeen,” says the festival’s co-director, ethnomusicologist and Elphinstone Institute lecturer, Dr. Frances Wilkins. “It celebrates a little-known tradition which has had a huge influence on the area in the past, from the times of the bothy workers on rural farms and from the days of the Arctic whalers, when many people onboard ships carried mouth organs, concertinas, and button boxes.”

Specifically Button Boxes and Moothies celebrates free reed instruments, meaning instruments whose reeds vibrate freely. ‘Button box’ refers to instruments like the diatonic button accordion and the melodeon, whereas ‘moothie’ is a nickname for harmonicas or mouth organs.

The festival does more than highlight the musical traditions of northeast Scotland, however; featured musicians and dancers from across Scotland, as well as Ireland, England and beyond, will be performing and teaching at the festival. Equally, participants from all over the British Isles come to enjoy, play and learn.

“We have an exciting program of artists,” says Wilkins, “including concertina maestro Alistair Anderson, virtuoso mouth organ player Will Pound, the excellent Irish button accordion and concertina players, Breanndán Ó Beaglaoich and Mary MacNamara, and Jew’s harp expert Michael Wright. There is a wide choice of workshops to attend over the weekend, as well as meet-the-artist sessions and performances.”

The festival kicks off on the Friday with a study day, sponsored by the British Forum of Ethnomusicology, entitled “Mouth Blown and Bellows Blown: Free Reed Instruments in their Social Contexts.”

Throughout the weekend, attendees can also learn about various free reed instruments and partake in a range of experiential activities open to new and experienced players alike.

“We have made sure that everyone is catered for, so we have included workshops for mixed instruments and dance workshop. Even if you don’t play a free reed at the festival, you can still join in the workshops. We also have plenty of opportunities for beginners to take part in sessions.”

Wilkins will also be performing on the concertina. She says her “musical heritage is very firmly based in the Shetland Islands tradition” since that is where she spent many of her “formative years learning and playing music with many wonderful fiddle players and guitarists.”

The co-director of Button Boxes and Moothies, Dr. Ian Russell, also plays a free reed instrument, and he’s “a keen button box player,” according to Wilkins.

Russell, the former director – and now Emeritus Professor – at the Elphinstone Institute started Button Boxes and Moothies, which runs every four years, in 2001. He is also the mastermind behind the Institute’s other festival, the North Atlantic Fiddle Convention, which has taken place in Nova Scotia, Newfoundland, Norther Ireland, and Aberdeen.

Button Boxes and Moothies, and the North Atlantic Fiddle Convention, are just some of the ways of sharing ethnomusicology, folklore and ethnology with the general public.

“We work hard to promote and preserve the traditions of Northern Scotland through community engagement, research, teaching, and publications,” notess Wilkins. “The aim of the Elphinstone Institute in promoting Button Boxes & Moothies is to play a part in reconnecting the North East of Scotland with this important aspect of the region’s musical heritage.”