Paul Tobin and Erica Dalton visited seven Celtic festivals in their home state of Colorado last year and much to the surprise of the dog-doting couple, they didn’t find a pet-themed vendor at a single one of them. Dalton points out that their dog, Kessel, a Belgian Malinois, isn’t a Celtic breed; however, she says, “We certainly consider her a furry member of our clan and it was disappointing that we couldn’t find anything for her while we were hitting up the vendor areas.”

And there you have the origin of The Caledonian Canine, a Celtic pet business that Tobin and Dalton opened in November 2014.

“Our mission is to promote the celebration of Celtic heritage and culture with unique pet care items designed to foster expressions of Celtic pride,” according to Tobin.

If that sounds like a tall order to fill, then consider the couple’s products. Tobin and Dalton currently offer collars and bandanas. Dalton hand-makes all the collars and makes them to order so they’re custom fit for the dog. The leather collars that The Caledonian Canine sells are hand-carved, hand-tooled and hand-painted by a local artist in southern Colorado, and the designs are exclusive to Tobin and Dalton’s company. A local company screen prints the clan bandanas as well.

“We care and pay attention to Celtic traditions and heraldry,” Tobin says.  “As an example, the Lord Lyon Court of Scotland prefers Scottish clan badges in graphic form to have the disclaimer in Scots Gaelic: ‘An cean cirean cinnidh,’ which means ‘The badge is for the chief of the clan.’ We’ve included this disclaimer on our bandanas.” 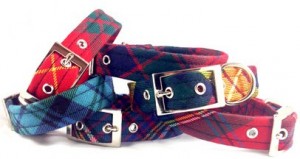 Tobin continues: “I recall during our product development phase that we spent an hour making sure we got the language and the reasoning correct. We don’t have to add the text in our bandanas, but we want to because we feel it is important to abide by heraldic traditions and respect the preferences of the Lord Lyon. Our products are not just beautiful tartan patterns around a dog’s neck. They are legitimate celebrations of pride in our shared culture.”

Dalton jokes that her dog owns more collars than she does pairs of shoes. Not only that, but all of Kessel’s collars are custom or semi-custom made. Dalton notes that she loves purchasing gear for her pooch from small businesses because they provide a personal touch that large, corporate stores can’t, and also because she likes to support businesses that clearly pour all their passion into each item they create.

That same philosophy guides The Caledonian Canine, according to Dalton.

“It was important to me to provide that same feeling to our customers. Additionally, our tartan collars are cut on the bias diagonally, which showcases the sett beautifully on even the smallest of collars – much better than our competitor’s collars, which are cut on the straight grain. We also use only metal hardware, rather than plastic, for durability and longevity.”

When it comes to the Celtic marketplace generally, Tobin asserts it is approaching a period of globalization brought about by popular media such as the film Brave, and the Outlander books. He notes the Internet has also played a role in bringing the Celtic people and fans of Celtic culture together.

“I believe more exposure to Gaelic culture in academia would foster greater interest in the Celtic community and marketplace,” Tobin says. “Even from reading Plutarch Lives and Livy’s accounts of the early history of Rome in college, I wanted to know more about Celtic history and culture. Unfortunately, many of the classical studies texts are from a Roman perspective. No such course was available and I just did my own independent research. I would have taken a class in Gaelic studies in a heartbeat.”

“We’re super-excited about rolling out our new product lines in the future,” she exclaims.