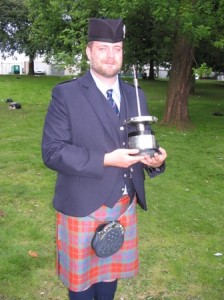 A family tradition continues this weekend at the Calgary Highland Games as Andrew Smith, Pipe Major of the Alberta Caledonia Pipe Band, carries the torch once held by his Grandparents. Get the details here!

What are your own roots?
I’m fourth generation Calgarian with family coming from England, Scotland,  Ireland, and Germany.

What are the rewards of being involved?
The games have always been a great goal to practice for and an opportunity to perform to a local audience.

Why is it an important event for the community there?
Calgary has a long history of Scottish settlers and it’s important to remind Calgary of it’s heritage.

Will you remain involved with the event in the years ahead?
Absolutely! I’ve supported the games for last 30 years as a competitor and so has my family in organizational roles on and off through out the years. It seems like natural progression as to the day I stop competing I know I’ll be also hlping with organizing of the games is some way.

How else are you involved with the Celtic community there?
I’m currently the Pipe Major of the Alberta Caledonia Pipe band. We compete at all the local games through out Alberta, the Western United States, and Scotland while representing Alberta’s Celtic community at the highest level of piping and drumming. It’s extremely important that our community has a top band as something to achieve to if you’re a competitive piper or drummer. The tendency is that these individuals become more involved in the community for longer periods of time.

Are we doing enough to preserve and promote Celtic culture generally?
Yes and no. There seems to be an insurgence of Celtic culture in media through out society with productions such as Braveheart, Brave and Riverdance, that brings our culture into the public spotlight, but more than ever there is less pipers and drummers playing at the highest levels within the 30 years I’ve been involved. I’m convinced the Celtic culture has become something seen and witness rather than a participatory action.

What can we be doing better?
We need to get people involved and hands on learning a Celtic instrument, dance or song. Members of the community need to be ‘loud and proud’ about the community and share their interest. The emphasis need to be on participation to continue the celtic arts through generations.