Calling Pipers to the Glen 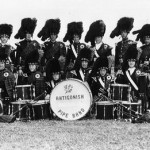 The Antigonish Highland Games started in 1863 and continues today as an authentic showcase of the best in Canadian and international Scottish dance, athletics and music. The region’s deep roots and connection to its Scottish heritage have helped produce some of the brightest stars of the Celtic world.

Monarchs have officially opened the Games. Premiers and ministers have competed and performed. Local athletes, dancers and pipers have been cultivated and advanced to the world stage. Championship pipe bands from around the region have come and gone. And 150 years later, the call of the pipes is still strong.

As part of the celebration commemorating 150years since the first Games in Antigonish, the Society is issuing a call to all bagpipers and drummers around the world who have played at the Antigonish Highland Games in past years; inviting them to return and march together as one band – to celebrate 150 years of culture, tradition and Highland hospitality.  The call is for all musicians who played in long-retired bands or those who have stored their pipes away. The Antigonish Highland Society is inviting them to unpack their pipes and drums and join former friends, Saturday, July 13, 2013, to commemorate a historic and cultural Canadian milestone in the Highland Heart of Nova Scotia.

“The Antigonish Highland Games is one of Nova Scotia’s annual signature events that attract thousands of spectators and participants from around the world,” says Alisha Grant, chair of the Games. “We know there are thousands of people who have competed in the Games over the last few decades and we’d love to have them come back to join us in celebrating this occasion.”

“As a piper from Antigonish, I have fond memories of competing at the Games,” says Mike Chisholm, one of the organizers behind this reunion. “A century and a half of dedication to preserving the culture of our ancestors deserves recognition.  What better way to do this than to gather pipers and drummers from around the country and celebrate this milestone. I approached the Games committee with the idea last summer and they thought it was a great plan.”

Helping Chisholm organize the reunion is Nova Scotia piper Ian McKinnon. McKinnon will lead the 150th reunion pipe band as its Pipe Major in the Grand Street Parade. The parade is an annual highlight of the highland games, drawing a huge crowd to enjoy pipe bands, highland dancers, fiddlers, floats and officials as they wind their way from St. Francis Xavier University to the Games venue at Columbus Field on Main Street.

McKinnon, best known as the piper in Rawlins Cross, is a former pipe major of the Antigonish Clan Ranald Pipe Band and the Dartmouth Boys Pipe Band.

If you would like more information on this reunion, please contact Mike Chisholm in Vancouver at 778-838-6366 or mikechisholm604@gmail.com or Ian MacKinnon in Halifax at 902-448-2135 or ian@groundswell.ca.