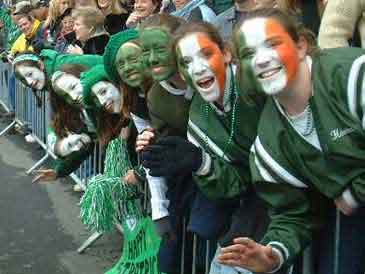 This weekend, the streets of Yarmouth Port, MA will go green with the Cape Cod St. Patrick’s Parade. Event committee member Tomas MacCormaic fills us in on the details!

What are your roles and responsibilities with the event?
I am part of the committee responsible for organizing, promoting and ensuring the financial stability of the parade. As with any event fundraising consumes a great proportion of the effort. To this end we are eternally grateful to our sponsors and supporters in particular to the town of Yarmouth tourism preservation fund which this year again provided our group with a grant of in the region of $17,000 to promote the parade through advertising. We as a committee are but one cog and we recognize the need for local businesses to benefit from the parade to ensure its long term success as thankfully does the town of Yarmouth. Further responsibilities include recruiting marching units, organizing the line of march, liaising with local Police and Fire to ensure safety and trying to lay on a fun event for those attending.

What is the event’s core mandate?
The core mandate of our event is to promote our culture through the medium not only of the parade but with outreach in the local community exhibited by our scholarship program which is generously funded by the Sons of Erin on Cape Cod to high school seniors via our Collen contest. We promote the Gaelic language in our literature and give talks to local schools and senior groups on Ireland. This year we also for the first time have a finalist from Cape Cod going forward to the Rose of Tralee heats in Boston by the name of Eliza Bowes who is an excellent Cape Breton style fiddle player

How has it grown over the years?
We initiated our first parade in 2005 with the then Chief of Police from Boston Kathleen O’Toole leading us. Our expectations were more than surpassed with the attendance and interest, since then our Grand Marshalls have included Bobby Orr, Terry O’Reilly, Mayor Ray Flynn, Doug Meehan, Dick Hoyt, Mickey Ward and Siobhan Magnus and this year we have Derek Sanderson so we have been extremely fortunate in attracting top notch people to lead our event which of course brings out more spectators.

Who attends the gathering?
Our parade is very much a family day out with people from far and near now attending on an annual basis. Even though Cape Cod has a high concentration of Irish Americans we attract supporters and spectators from all sections of our community, indeed this year our elected Mayor is Teddy Zambellis a well known member of the local Greek community but who is a great supporter of a lot of community based events here. We award others within our local community for their service to their fellow people also on an annual basis and are honoured by their presence at the Grand Marshalls Ball the night before the parade

What can they expect to experience this year?
We hope that people can expect blue skies and 60 degree weather which is a lofty expectation at this season. They can expect a colourful music filled parade with a great cross section of marchers participating and seeing a small part of our culture on the streets

Why is it an important event for the Celtic community there?
It is important for us as a community to have this event to keep our traditions alive and to hopefully inspire those coming behind us to understand and be proud of their heritage. Our peoples have been in the USA for a long time and even with the passing of generations have managed to achieve this, I would be saddened to think that in 100 years time these traditions would have been designated to the past

What are the plans for the event in the years ahead?
Our plans going forward are to hopefully have continued success with our events, to expand upon what we currently have in place and most importantly to ensure the kids behind us are interested enough through our endeavours to keep it alive

Is enough being done to preserve and promote Celtic culture generally?
Is there enough being done to preserve and promote? Well times have changed I would say dramatically in regards to this. As our people have climbed the social ladder a lot of the so called ghettos have been abandoned for the suburbs whereby children are in a much more mixed environment therefore the ability to educate to those of whatever fairly homogenous culture which prevailed in the previous areas diminishes. This is true of all previous immigrant groups to this country we come we gel together then we somewhat disperse and with the dispersal local influence at ground level over education, stereotypes eventually goes by the wayside therefore making it much more difficult to maintain a specific culture both its rights and wrongs. We have to promote our culture as one of being alive and healthy for the individual to enjoy. Culture is a learning curve which has to develop and shed its mistakes in order to survive in that respect I do think that we have been lucky in achieving this.

What can we do better?
Our respective governments in Ireland and that in what will hopefully be a free and independent Scotland need to take the bull by the horns in regards to our Gaelic language this is the core of our culture. It survived through repressive laws for generations and for it to die through our own indignation would be a shame. Great leaps are being made at local levels but in my opinion our supposed leaders only pay its survival lip service.