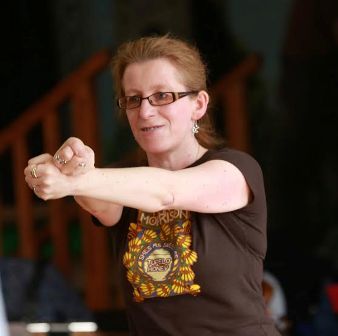 Carmen Hunt first began Cornish dancing to stay fit, but soon the unique style of dancing evolved into an end unto itself.

From first learning the style in 2001, Hunt a few years later found herself joining a couple of Cornish dance groups, dancing at festivals and leading workshops. These days she dances with the Kemysk Cornish Dancers and the Scoot Lyskerrys.

For those not familiar with the form, Hunt describes three different types of Cornish dance. The first are social dances, popular at feasts and special occasions. These include the “furry” dance, a processional dance which winds its way from one part of town to the other.

“They have similarities to some of the Irish set dances and Scottish longways set dances, although the distinctiveness of dances such as Newlyn Reed’s almost eastern European ‘Oi!’ with the folded arms, the finishing serpent for Tremadheves and the big wheel in Ros Vur has led onlookers to recognize they’re in a very different Celtic country,” Hunt says.

Finally Cornish step dances are where solo or sets of dancers “show off” or take a challenge. Hunt compares the discipline to the Scottish sword or pipe dances, except that, of course, the latter implements aren’t employed in the Cornish step dance.  Notes Hunt: “Typically scoots, clogs, taps or hard shoes are worn to make one hell of a clatter.”

Hunt says that reels have been “in living memory” for a long time in Cornwall and that, unlike the Irish soft shoe solo-style reels, involves sets of three or four dancers weaving in and out of each other with a specific step for the dance.

Hunt is quarter Irish on her mother’s side and born on a farm in Oxfordshire, England. She lives in Cornwall now with her husband, who is a folk musician and a journalist, and their son. She first took up ballroom dancing at the age of 13 at the Coreen Bailey School of Dance.

“My sister and I missed out on the ballet and went straight into learning the waltz, fox-trot and disco dancing,” Hunt says. “It was a good foundation for picking up rhythms and beats and the classic structures of dance and posture.”

Since then, Hunt shares that she’s enjoyed dancing as a way to relax, have some fun and get some exercise. In her travels, she’s picked up a range of styles, including African, Indian, Flamenco, Salsa, Irish, English, Scottish, Cornish, Breton, Manx and more, along with styles such as jive, jazz and contemporary. “I love the music and the rhythms,” she says, “the similarities and the feel-good factor.”

In 2010 the Kemysk Cornish Dancers invited Hunt to join them. The idea was they would bring together a group of dancers from across the Duchy to create a set of specially choreographed traditional Cornish dances for a couple of festivals. Since then the group has continued to perform occasionally at festivals and special events around Cornwall.

She says Scoot Lyskerrys evolved from the Sparkling Saturdays Cornish Dance Workshops, which were established when dance artists Lois Taylor saw a Kemysk practice. Taylor and Hunt came up with the Vital Spark Festival of the Arts, which revolved around a single Cornish dance, FerLyskerrys, along with a series of workshops culminating in a big celebration.

“The dancers and musicians enjoyed the series so much, they wanted to continue and since that first workshop series, Sparkling Saturdays has continued to flourish for both musicians and dancers,” Hunt notes.

The future of Cornish dancing looks bright as Hunt asserts that young people are attracted to the dance style and eager to join in any time Cornish dance groups or street musicians perform in the street.

“In Perranporth, for example, there’s a few hundred school children who join the annual procession and gather with their parents and grandparents for singing and dancing.”