Catching Up with John Kerr 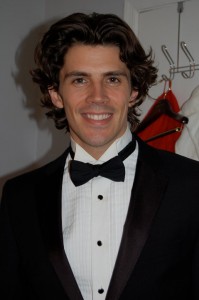 Where’s home these days?
Home is in Hackensack, New Jersey. I was living in New York City up until recently but as I was working a lot more in NJ I decided to make the move this summer. The rent is a lot cheaper and I am still close enough to the city to do some fun stuff. I mean real home will always be Scotland but for this part of my life I have to be in the US.

What have you been up to in recent months?
Apart from making the move, which was stressful enough, I have mainly been coaching at the Ice House in Hackensack. I work with a number of teams who are all training towards the Sochi Olympics in 2014. I also gave a skating seminar in Scotland and performed in a couple of skating shows in the US and in the UK. During the Games I was involved in organizing the ‘Ambitions’ program which was created by the BOA( British Olympic Association) to give budding Olympians an Olympic experience. The idea being that if these young athletes go on to become Olympians they will already have some experience of what the Games are like.

What did you think of the Olympic Games?
I was very lucky to be in London for the whole 16 days of the Games and it was quite simply unbelievable. The atmosphere in the city was like nothing I have ever experienced. There was like a collective euphoria throughout the city – so many amazing sporting moments and so many medals for Team GB. The venues were great, the trains ran on time, the people were friendly, the weather was good. I really don’t think London could have done a better job.

Scottish athletes did very well – their best showing in a century – your thoughts?
So unbelievably proud – I think in Scotland we don’t necessarily think of ourselves as a country that regularly produces World class athletes but I think the results of these Games will have put that idea to rest. Sir Chris Hoy is now the most successful British, and Scottish, Olympian in history and I was especially proud of my friend Katherine Grainger finally getting Gold in the rowing. This was after 3 silver medals at the previous 3 Olympic Games; an outstanding athlete and a wonderful personality.

What is it like to be an Olympian?
It’s great for meeting new people. I have an Olympic tattoo on my arm and I’m always surprised how much people comment on it and who are interested in my story. For me it’s probably the thing I am most proud of in my whole life. It’s the pinnacle of our sport and you knew that if you made it to an Olympics you had really made it.

What’s on your agenda for the remainder of 2012?
Mainly coaching and hopefully Sinead (sister) and I will get to perform in some more skating shows. We felt very honored to be cast members of ‘Stars on Ice’ last year which is the premier skating show in North America so we are hoping that might happen again. We are also going to be doing some shows up in Canada this winter called ‘Holiday Festival on Ice’ so we are looking forward to that as well.