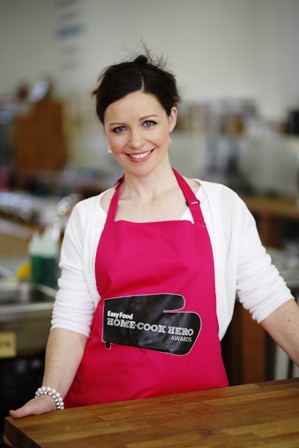 The first time I meet Catherine Fulvio, she is wielding an oversized golden trophy.

“I just got back from New York City this morning,” she says. “I was competing in the St. Patrick’s Day Beef and Guinness Stew cook-off on national TV. Guess who won?”

Despite traversing an ocean, and wrestling jetlag, Fulvio seems unfazed by an interview with a journalist, or the impending feeding frenzy of sixty hungry tourists about to land at her doorstep. But such is the day in the life of a Celtic celebrity chef, teacher, and food writer, who describes herself as having “Irish blood and an Italian heart.”

Best known for hosting three TV shows – “Catherine’s Family Kitchen”, “Catherine’s Italian Kitchen,” and “Catherine’s Roman Holiday”, she has also appeared on NBC’s Today Show and BBC’s Saturday Kitchen, and is now a household name both at home and abroad.

Before she was a superstar, however, Fulvio started out on the family farm in Wicklow, Ireland.

“I grew up cooking with my mother,” she reminisces. “She was a fantastic cook, always entering cooking competitions. We were dragged all over Ireland. She took it very seriously.”

As a child, Fulvio often played the role of sous-chef, assisting in these cook-offs across the country. Back at home, she watched her mother in the kitchen, operating one of Wicklow’s first farm-based bed and breakfasts.

“She made home-cooked breakfasts, straight from the garden. Growing up here, we had our milking parlour. We always used fresh milk and cream.”

These early experiences cultivated Fulvio’s appreciation for food sources, along with a strong connection to the land. Over the years, she inherited her mother’s love of cookery and “field to fork” food philosophy.

“She had her own garden – as I do – and used whatever she could from the farm. That’s something that I still do to this day. It’s very important to me.”

Today, Fulvio lives on the 280-acre family farm, where she runs the award-winning Ballyknocken Guesthouse and Cookery School. The name stems from Gaelic – Bailean Cnocan – meaning “the town land of the little hill.”

The guesthouse is old, but the cooking school is new. Arriving at Ballyknocken, it feels like entering a country estate, superbly decorated with rustic relics and dark wood floors, and with spicy aromas wafting in hallway. I’m ushered into the parlour where a tray of leek and cheddar scones, tea, and a crackling fire await. Fulvio tells its creation story while spooning homemade carrot and cumin soup into our bowls.

“Guests began asking, how do you make this?” she says. “So I started showing them on the dining room table. I kept looking over at the empty milking parlour, thinking, this is such a waste of an empty space.”

Fulvio renovated the room into a cooking studio, and within two years, opened the culinary school. Now, people flock from Ireland and abroad to the locale to learn the art of Irish cookery. Some register for a one-day workshop, whilst others stay at the guesthouse and enrol for week-long classes.

“We also book groups, and get quite a few from Newfoundland,” says Fulvio. “A lot of choirs – I’ve been serenaded so often to Danny Boy!”

Most students gravitate to the culinary school craving inspiration, and to “fire up” their mundane daily menus. Others are keen to rub elbows with a celebrity chef – Ballyknocken certainly attracted extra attention after Fulvio appeared on national television.

“I got the opportunity to cook on the morning show here,” she recounts. “It took off, and then I was on there almost once a week for a year.”

Impressed, the broadcaster launched a TV series starring Fulvio, and it wasn’t long before the BBC and NBC began calling as well. Since then, she has written five cookbooks – with a sixth in the works – and has won several awards.

Meanwhile, back at the farm, the esteemed chef makes gastronomy fun and easy, encouraging novices to get their hands dirty without fear. For Fulvio, the most valuable lesson is learning how to cook properly.

“I want to teach people to make ‘every day exceptional’ in the kitchen,” she explains. “And that’s not by doing extraordinary things. It’s about learning the key skills in cooking.”

Like what? According to Fulvio, it’s about returning to the basics that many people have forgotten.

“Kneaded scones end up stones,” she notes. “It’s also about layering flavour – caramelizing your meat, cooking your onions until soft and sweet. Simple rules like that.”

By way of example, she warns against blending all the Beef and Guinness Stew ingredients at once. Instead, build up the flavours, first by frying the onions until tender, followed by beef tossed in flour, salt, and pepper. All the caramelized juices mingle in the pan, releasing a natural sweetness into the dish that “can’t be bought.” Then, layer with more flavours, such as Guinness.

Every culinary class has a theme, ranging from Irish baking to “Guinness is Good For You” to the most popular course dubbed “7,7,1.”

“Seven nights, seven dinners, one plan,” smiles Fulvio. “It’s always booked out, because it does exactly what it says. It’s one that Irish people can use frequently.”

Walking around Ballyknocken’s backyard, fences surround leafy greens sprouting from the soil, alongside little labels speared into the ground. Fulvio points out the various plants and herbs – golden marjoram, pineapple mint, kale – and talks about each as if they’re old friends. I hear sheep bleating somewhere in the green hills, cloaked by the misty morning air.

“We have fantastic ingredients in Ireland,” she says. “We’ve got so many forests and fresh Atlantic air. And our animals graze outside year-round. That’s why our cream and milk are so yellow. Our animals are naturally grass-fed – it’s why our beef and lamb have such a great flavour.”

Part of the classroom experience involves picking herbs, vegetables and fruits from the surrounding gardens and orchards, using fresh ingredients in the recipes. When ingredients can’t be foraged, Fulvio buys from the local butcher and neighbouring farmers.

“If you can’t grow it, or if you can’t produce it yourself, buy locally,” she encourages. “You’re supporting local farmers and there are no air miles on your food. But you’re also getting the best – it’s fresh and the flavour is better!

“In Ireland, we’ve had our fair share of problems with emigration,” she continues. “We need to keep as much money in our community as we can, keep the young people working. That won’t happen unless we buy food locally.”

In Fulvio’s kitchen, Irish cuisine is so much more than meat and potatoes; she offers up ideas on how to create easy, tasty recipes that have Irish roots, but international flavours.

“We cook everything here, from Italian to Irish to Asian. I’m known for the Italian-Irish fusion. When you think of Italian food, it’s all about eating locally and seasonally – that’s the concept behind eating good Irish food as well. It works very well.”

Although she acknowledges that the Irish diaspora has posed challenges for communities, in some ways, Ireland’s food culture has benefitted. Years ago, Chinese food was a take-away container to be wolfed down after the pub; today, upscale Szechuan, Indian, and Thai restaurants pop up across Dublin, some serving exceptional Irish fusions.

“The Irish are very good at bringing ideas back home and mixing it with something traditional,” she says. “I suppose because of our culture of being an island and always looking out. We’re not afraid to travel and try new things.”

Of course, some things in Ireland’s food culture will never change.

“On the flight back from New York this morning, there was an Irish school tour behind me,” says Fulvio, with a toothy grin. “When the plane landed, one of the young boys shouted, I can’t wait to get home and have a big plate of spuds! I guess the potatoes just weren’t the same over there.”