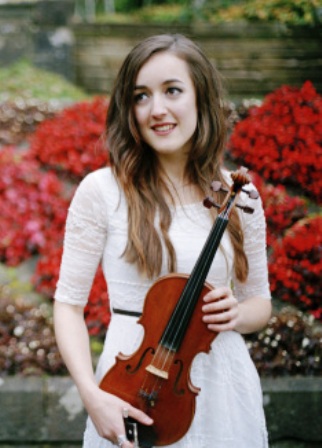 Catriona Price says the idea to pick up the fiddle first came to her in her sleep when she was a child.

“It sounds cheesy,” the Orkney Island native notes, “but I had a dream! Both my aunties in Germany play violin and when I was about five-years-old I dreamt that I asked one of them if I could have a go, and she said no. I woke up crying.”

Price also awoke determined, and from that point on she became obsessed with the idea of having a fiddle of her own.

“I remember we had one in the house, but I wasn’t allowed to play it until I’d had my first lesson,” she recalls. “When my folks weren’t looking, I climbed up on a chair and got it down from the top of the dresser, took it into my room and started trying to figure it out. My first lesson could not come soon enough.”

Explaining her passion for the instrument, Price believes it was the sound of the fiddle that intrigued her; every time she heard someone play she was desperate to join in and became frustrated when she couldn’t pull the proper notes out of the instrument.

“That made me practice,” she shares, adding that she began lessons at school when she was seven years old. “Music excited me more than anything else in school, and by the age of 12 I’d declared ‘I am going to be a professional musician.’”

Initially, folk music attracted Price as a kind of rebellion. At home her father, whom she describes as a “huge music geek,” played classical albums, owned every single Bach cantata recorded and kept backdated issues of BBC Music Magazine.

“You get the picture. But because this was what my parents were into, it definitely was not cool, and I only wanted to play folk music.”

However, her first teacher in Orkeny, Douglas Montgomery, broadened her mind and persuaded her that other forms of music were every bit as cool as folk. Under his influence, she auditioned for St. Mary’s Music School in Edinburgh and spent her final two school years there.

“Being around like-minded kids who had been in specialist music education for years really pushed me to up my game,” Price comments.

“I am really glad that I chose to study at these ‘classical’ institutions,” she enthuses. “People often ask if having this formal training takes away from the rawness of your folk roots, but I think when you grow up steeped in a powerful music tradition such as that of Orkney, it’s not going to go anywhere.”

Her partner in musical duo Twelfth Night is harpist Esther Swift. Their newest recording is titled The Devil Makes Three.

“The writing process was entirely collaborative, both musically and lyrically” Price states, “and was inspired by a huge number of things. But at the end of it all, we found common themes of the beautiful landscape that surround us here in Scotland, the sea, and stories of brave and cool ladies.”

2015 promises to be busier than ever. Twelfth Day is touring in Germany followed by a month on the road in Mongolia. A Twelfth Day extended play release will come out by summer, and the band will head back to the studio in the autumn to record a new full-length album. As well, Price is working with a new fiddle band, Fara, which will record a CD this year. And, as if all that were not enough, she is also involved in creating an online space for sharing and learning Orkney tunes called the Orkney Tune Cloud.

“It’s difficult to say exactly how I’ve evolved as an artist since I started playing, as I feel like a new little piece of that evolution happened every day and continues to happen,” she concludes. “There’s too much to pinpoint. I just try to listen to everything and be inspired by everything.”