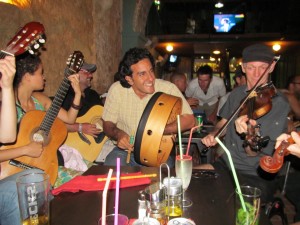 Each April, musicians from around the world converge on the colourful capital city of Havana for CeltFest Cuba, a week-long celebration of Celtic song and dance.

With workshops, seminars, walking tours, concerts and nightly jam sessions, the gathering — now in its fourth year – is a labour of love for event co-founder Kilian Kennedy.

“The festival is really about celebrating the Celtic cultural traditions in Cuba, and reuniting them with the “old world” traditions of their Celtic cousins,” he shared via email from his home near Dublin. “It is primarily a teaching festival with recitals, concerts, historical talks and more adding to the fun. It is operated without profit, and as it builds in popularity it will provide benefits to the local Cuban economy and culture.”

CeltFest has had a profound impact on its participants as well.

“I had travelled to Cuba before and I was trying to find an ongoing musical connection to that place when I read about CeltFest Cuba. It was like a dream come true for me. I love Celtic music and the first festival for me was amazing. I played with musicians from Galicia, Brittany, Ireland, Scotland, Cape Breton, and of course, the Cuban musicians who are descendants of the Galicians and Austurians that came to Cuba in the 18th and 19th centuries. It was a feast of music and dance that started with workshops in the morning, lectures and talks in the afternoon, evening concerts and then a late night session lasting till the wee hours, and this went on every night for 10 days.”

“I’ve travelled quite a bit and I don’t think any place has had an effect on me like Cuba,” said the Cape Breton fiddler via email.

“The country has an amazing history to begin with, but it’s the appreciation of music in general down there that touches me the most. There are an incredible number of musicians in Havana of all styles who always look forward to sharing their music and having you share yours. In the first year of CeltFest, I went from dancing with a tango troupe to being hauled up on stage to play with a Caribbean style drum band.”

She believes that the best way to preserve and promote Celtic culture in Cuba is by passing it on to future generations.

“In the fiddle, guitar, pipes, dance and flute workshops we do for CeltFest, all the students are appreciative of the opportunity to learn, and they work harder than any group of students I’ve ever had. The Cubans don’t really have an option to go elsewhere for Celtic studies. It’s very difficult for them to leave the country and very expensive to fly someone in. CeltFest workshops provide them with what they need to learn and study further on their own. Last year, we all brought down books and spare strings for the fiddlers, and recorders for the pipers to practice on.”

More importantly, she explained, the event recognizes Cuba as a Celtic nation among Scotland, Ireland, Wales, Brittany, Cornwall, Galicia and the Isle of Man.

“The Cuban pipe bands deserve recognition for the hard work they’ve put into their craft, and they ought to have more opportunities to perform on international stages. Celtic Colours International Festival brought in several Cuban pipers a couple of years ago, demonstrating that the Spanish Celtic influence in Cuba cannot be ignored.”

“The musical exchanges between my country and Canada have been invaluable,” said the 29-year-old. “CeltFest, in particular, gives our little community the chance to come together and grow with the help of others.”

“For many years there was very little recognition of the Celtic influence here,” he explained. “CeltFest has allowed us to explore and express our roots and our passion for this music.”

Roy Johnston sums up the relationship.

“Cubans are very passionate about culture, about music and dance and art. They are hungry to learn and so appreciative of what we can teach them, but they are equally generous in sharing what they know.”