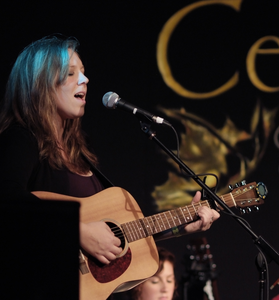 In 2010, Nova Scotia songwriter Carmel Mikol brought forward the idea of pairing up established and emerging songwriters to see how traditional music influences their contemporary work. The concept is being revisited tonight in Big Pond, Nova Scotia as part of the Celtic Colours International Festival. Celtic Life International caught up with the triple-ECMA nominee to discuss her passion, her profession and the project.

What is your own heritage?
I’m a Cape Bretoner. But my father was from Chicago and my mother is from Montreal. Farther back, my grandparents came from Russia and Poland, escaping revolutions and dreaming of new beginnings.

What inspired you to start playing music?
My father used to sit around playing his 1967 12-string Martin in our small house on the farm in Cape Breton. He taught me to play guitar and sing harmonies when I was six or seven. A piano appeared in our hallway a few years later and I picked away at it until I found melodies. I started writing songs soon after and it has felt like a necessary process ever since. I eat breakfast, I jog, I read Thoreau, and I write songs.

Are they the same reasons that you still do it today?
There is a divide between the practice of making art and the business of making art. In the music business we learn to censor ourselves, discipline our art form, turn our talents into crafts, and thus become “professionals.” While I’m still driven by the act of song-making, the work of finding each word laboriously, and the connection made with listeners when the song is performed, I do think something gets lost in the process of becoming a working musician. It takes focus and discipline to stay dedicated to your art in the face of social media marketing, entrepreneurship, touring schedules, publicity campaigns, etc.

What are the rewards of doing what you do?
The process of creation is a reward in itself. But above that, there is the ability to travel, connect with people from all walks of life, and collaborate with other musicians who inspire and challenge.  The music community in Nova Scotia is also a continuous source of friendship, support and innovation.

How are you involved with the Celtic Community?
I conceived of and help produce a creation project for Celtic Colours International Festival called “Roots to the Future”. The project pairs traditional players with contemporary instrumentalists to create new music that integrates the traditional material into diverse contemporary styles. The objective is to show how the traditional elements influence young Cape Breton artists of all genres, especially those who are not directly working in the Celtic music scene. This project continues and has been very fulfilling, yielding both new friends and a great bunch of new song.

Why is the Roots to the Future project significant?
For me, Roots to the Future represents creative innovation combined with respect for the past. These two things are very important to me as an artist. I have huge respect for the amazing traditional music community in Cape Breton and it’s great to see so many young artists making the traditions their own. Roots to the Future brings artists from diverse genres together and builds bridges between artists that may never have a chance to work together otherwise. And most importantly, it creates NEW musical works that add to the fine catalogue of tunes and songs from the Maritimes.

Wow will you grow the project?
Already in its second incarnation, Roots to the Future has tremendous potential. Every time a new artist is introduced, different works are made. My hope is that Roots to the Future will continue in subsequent years and include many of the great young artists currently working in the Maritimes. I also hope to take the idea of this project to audiences abroad by including a wider range of artists, perhaps partnering with artists from overseas. Personally, the work I have created for this project will go on to be included on my future records and I will definitely work with these musicians on future projects.

Why is Celtic Colours important for the Celtic community, and Cape Breton as a whole?
Besides being a huge late-season boost to the economy, Celtic Colours brings people together through concerts, educational workshops, and community events in a way that nothing else does all year. Walking into Festival Club for the first time each year, is like heading into a family reunion – both for audience and performers alike. There is a family of loyal audience, volunteers, and artists who make it a truly unique event. At Celtic Colours, tradition is remembered, renewed, and remade.