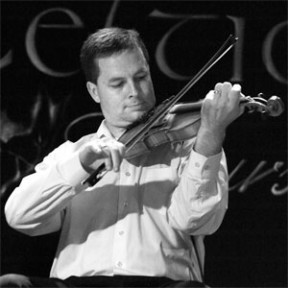 Rodney MacDonald is an accomplished Cape Breton performer who has toured throughout Atlantic Canada. He is the grandson of the great fiddler and composer, Donald Angus Beaton. He began learning step dancing from his parents at the age of four. He excelled in step dancing and soon picked up the fiddle. He recorded his own solo recording in 1996 entitled Dancer’s Delight, Traditionally Rockin’ in 1997 (with his cousin Glenn Graham) and he was also included on the 2004 Smithsonian release The Beaton Family of Mabou: Cape Breton Fiddle and Piano Music. In 1998 he received two nominations for the East Coast Music Awards. Recently he took time out of his busy schedule to speak with Celtic Life International.

What is your own ethnic background/heritage?
I grew up and currently reside in the community of Mabou. My people on both the MacDonald and Beaton sides both came from the Locharber areas in the Highlands of Scotland.  My father (Alex Angus MacDonald) is a tradesman (pipefitter). (Rodney Joseph, Alex Angus, Kenny, Sandy, Finlay) My father’s people were fisherman and farmers. He and my 5 uncles are well known as great dancers at the local dances. His cousin’s such as the late, Kenneth Joseph MacDonald {fiddler from Mabou Harbour) and Angus Joseph MacDonald (fiddler from Mabou Coal Mines) were also well known in music circles, locally. My mother’s (Elizabeth Ann) was a Beaton. My Beaton side is very well known in the music circles for their fiddling, piano playing, and dancing. They are often referred to as the “Beatons of Mabou”. My grandfather, Donald Angus was a blacksmith and drove the mail.  He came from a style of music passed on to him by his father, Angus Ranald Beaton (fiddler/piper). That same style was also passed down to his sister, Janet Beaton (piano/fiddle). Donald Angus was a great fiddler and known to be a tremendous dance player. His compositions are widely played. He had a Gaelic ‘taste’ to his music. My grandmother, Elizabeth Beaton (MacEachen) was a piano player.  She grew up in Mabou Coal Mines and also grew up with music around her. She played well into her 80’s and was featured on many albums/cds over the years with her husband, sons, and grandchildren. Of their 9 children, Kinnon Beaton (married to Betty Lou MacMaster-well known piano player) is the best known for his fiddling while my uncle, Joey Beaton (piano), has accompanied the biggest names in Cape Breton Fiddling for over 40 years.  Siblings, Angus (piano), Mary (piano), and Joan (piano/fiddle) are all musicians in their own right while the remainder, including my mother, being known for dancing capabilities.

How, when and why did you get involved with fiddling?
The music was always on radio, in the car, or on the turntable at our home in Mabou. I was first a step-dancer and started in the kitchen at my parent’s home in Mabou.  My first dancing performance was in 1980 in a square set at the Mayflower Mall in Sydney.  My partner was Heather Rankin (Rankin Family). When I was 12 my uncle, Kinnon Beaton, offered fiddle lessons to any of the nieces who wished to play.  We began in October, 1984 and performed in the Mabou Ceilidh Concert in July of 1985 accompanied by our grandmother, the late Elizabeth Beaton. Of that group, both myself and Glenn Graham (son of Mary (Beaton) and Danny Graham) continued to play, compose, and record our music. Since that time, Andrea Beaton (fiddler, piano, dancer), daughter of Kinnon and Betty Lou Beaton, also started.

Are they the same reasons you do it today?
The reason for starting to play the fiddle remains to be the main reason I play. My love of the music is a large part of who I am and when I play at a dance, ceilidh, or house party, it feels very natural. I jig tunes to myself or whistle them the same way my parents did in the house, garage, or at work. All I can say is that I love it. When I see/hear my son, Ryan, listening and enjoying the music, it makes me proud. Composing music has become an even larger part of my musical interest over the years.

What else inspires you?
Community, people in general, and in particular young people all inspire me. I would say that I’m best known as a dance player/pub player and love to see dancers on the floor. My son, Ryan is of course as well. The scenery of the island of Cape Breton is inspiring and of course, the Gaelic language which is at the very core of my music and dancing.

What have been some career highlights?
My career highlight would have to be that of my political career and becoming the Premier of Nova Scotia in 2006-2009. I was first elected in 1999 and became a Minister of the Crown at that time. I was re-elected as the Member of the Legislative Assembly for constituency of Inverness in 2003, 2006, and 2009. Previous to 1999 I was a secondary school teacher. Currently, I am the CEO of Colaisde Na Ghaidhlig/The Gaelic College located in St. Ann’s, Cape Breton and President and owner of RMD Development (Consulting Company) which also owns Ceilidh Cottages and Fiddlers Restaurant, located in West Mabou, C.B. My wife Gayle is a partner with this company.

Are young people still interested in Celtic fiddling?
Young people are still interested in Cape Breton fiddling with many taking lessons from various instructors. They are many opportunities to learn including of course at the Gaelic College where the fiddle is one the main instruments taught as one of our many disciplines. This being said, we need to do more to encourage our youth to take up fiddling with organizations such as the Cape Breton Fiddlers Association and others able to play an important role. With so many outside influences today from the internet, etc we need to find new ways to reach our youth.

In your estimation, are we doing enough to preserve and promote Celtic culture?
There is a great deal being done but I believe we can and should do more. The history of the Gael is the starting point along with the Gaelic language. We need to teach ourselves, our children, and the general population about where we came from, their language and culture, and about our music and dance. We need to instill that same sense of pride that has caused and enabled generations of Gaelic speakers, musicians and dancers to practice and learn their skill. This takes time and must be done in a holistic manner to truly appreciate why and how the language is spoken and why we play our music the way we do. It is not something that can purely be taught in a classroom, and nor should it. Most importantly it must be done at home. One must “live” it to truly understand it. That in my opinion is the Gaelic way.

What can we be doing better?
Utilizing the current generation of native Gaelic speakers and older musicians in ways that assist current musicians, dancers, and learners is integral to the process and must be done to a greater degree while we have them. We also need to see greater opportunity in our school system for the learning of our local history. Before learning about someone else’s history we should first learn about our own “Gaelic” history to truly understand where we came from and who we are as a people.

What’s ahead on your musical agenda?
I look forward to playing the “circuit” of dances, concerts, and pubs in the years ahead.  In addition I will continue to compose new tunes and plan on doing another CD in 2013.