Celtic Colours in the Schools 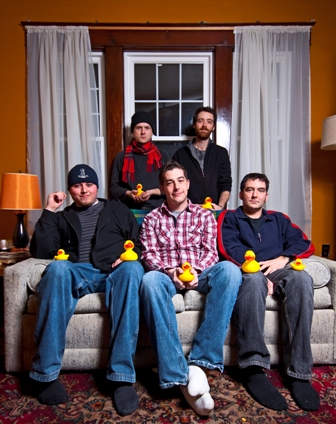 Celtic traditions are alive in Cape Breton, Nova Scotia where the stomps of seasoned step dancers and the sounds of fiddles, guitars and pianos fill dance halls across the island.

Organizers of the Celtic Colours International Festival, a 10-day October event that celebrates Celtic music, dance and culture, want to ensure the island’s living Celtic culture will be sustained in future years through educating local youth.

The organizers developed an educational program 13 years ago that brings musicians to select schools throughout Cape Breton to expose the island’s youth to traditional Celtic music, dance and the Gaelic language through participatory performances.

The program, Celtic Colours in the Schools, added a new option this year called Roots in the Room, which brings traditional Cape Breton musicians into music classes to perform and answer questions students have about their careers. The performances offer a more intimate setting than a school-wide presentation.

The Elementary Roots program brings in young artists who engage students in Grade Primary through Grade Six with interactive performances in which they learn a few Gaelic phrases and step dance moves in addition to watching the musicians perform.

Yvette Rogers, the program’s outreach coordinator, said the elementary students are enthusiastic when the artists visit their school and most grasp the lessons right away.

“They were so excited and they were all up step dancing and they just light up,” she said.

“I can sense the excitement in the room.”

In the Junior/Senior High version, bands from the Celtic Colours lineup perform an energetic show with music that crosses genre lines to broaden the students’ perceptions of what traditional Cape Breton music is and what it could be.

“We give them a cutting edge band that is rooted in the traditional culture, but they’ll often have a modern edge. Sprag Session is one of the bands we’ve brought in,” Rogers said. “They get a really good response from the students because they have the drum kit, the electric bass – it’s new but it’s still quite honourable in terms of it stemming from traditional music.”

Music teacher Donna-Lee Parker brought the Roots in the Room program to her Grade Nine class in Louisburg. She said having Cape Breton fiddler Rachel Davis and singer songwriter Buddy MacDonald speak with her students helped them develop an appreciation for traditional roots musicians.

“The Grade Nines are a hard nut to crack in a sense because they’re all about being cool. But once Rachel and Buddy started talking and telling stories, they were very attentive,” she said. “Louisburg is at the end of the road, literally. It’s a little fishing town and they’re kind of cut off from music, except for the radio. To try to open them up to Celtic music that is so present in Cape Breton and is unique to Cape Breton, that’s what I was trying to bridge with Roots in the Room.”

The program also brought Cape Breton musicians Dawn and Margie Beaton to Parker’s class. They offered her students advice on how to get involved in the music industry in Cape Breton by maybe selling tickets at the door, or by going to school to learn about music production or even designing album covers.

“I think they were able to open the students’ eyes to the whole industry side of music, but in Cape Breton right around them. I think it was very, very valuable,” Parker said.

She said the program is worthwhile whether it inspires students to pursue traditional music as a career or to develop an interest in any aspect of the culture.

“If we get these students to say, ‘Hey mom and dad, can we go to this concert at the Playhouse? It’s Colin Grant or it’s somebody from Scotland.’ If you can get them to appreciate the music and want to go to a concert, then it’s totally been successful.”

Rogers said the increased enthusiasm for Celtic music helps the Celtic Colours Festival, but the main focus is on inspiring and motivating Cape Breton children and youth to take an interest in the Celtic heritage and culture of their island.