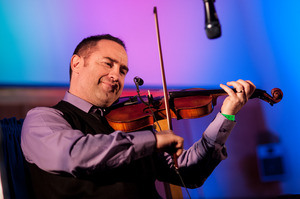 What do you like most about the event?
I like meeting and performing for people that have travelled near and far: getting a chance to meet and jam with international musicians that come to the festival. I also like the feeling of “family” you get: no matter which venue I perform at I am warmly greeted by numerous community volunteers who go out of their way to help you and make you feel welcomed.

Why is it important for the community there?
Celtic Colours has truly put Cape Breton on the map. By doing so, it gives tourists a chance to see our island, participate in our community/cultural events. It brings much needed tourism dollars into the communities. But most importantly, it keeps the culture alive.

Why is it an important gig for you as a performer?
It is an International festival: it gives me an opportunity to introduce my music to the International market through the audiences as well as the buyers (for other festivals).

Will you be involved the festival again in the years ahead?
As long as Joella, Dawn and the Celtic Colours Festival will have me….I will be honored to be there.

What’s on tap for the rest of 2013?
Well, there is Nova Scotia Music Week in Sydney, other gigs around the Maritimes. I am in the studio too….working with different projects.