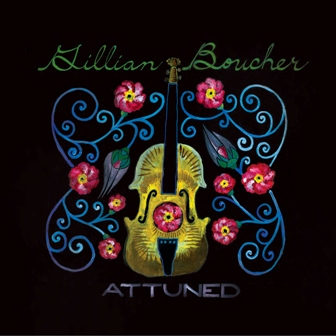 Whether performing with her full band in front of thousands, as a vibrant acoustic duo with guitarist Seph Peters or solo in a kitchen of her native Inverness County playing the old tunes of her ancestors, Nova Scotia fiddler Gillian Boucher is at home on any stage. Recently we spoke with her about her new recording Attuned and her appearance at the year’s Celtic Colours International Festival.

How long have you been involved with Celtic Colours as a performer?
I was very privileged to be a performer at the very first Celtic Colours Festival in 1997 as well as the following festival in 1998. While living overseas I was unable to be a part of the festival but since spending more time in Nova Scotia over the last 6 years I have been a regular performing artist…The festival has always maintained an excellent harmony between involving local performers and of course their extensive roster of international artists as well. It truly is a bringing together of friends and communities from across the globe with Celtic culture being the glue that holds it all together and I’m always honored to be a part of it. Festival club especially is like a huge family reunion!

What do you like most about the event?
As an artist, it’s definitely the combination of music and friends! During my years in Edinburgh I made so many friendships within the music community and since moving away seldom get to see many of them, but each year at Celtic Colours we always have an opportunity to see each other and connect again. It has helped nurture those friendships. And of course, sharing music with new and old friends, learning new tunes in the green room at the festival club at 2am… I mean… it’s just magical. Sharing the stage new artists and also old friends is also very exciting. For example, this year I’m performing alongside Dry Bones which features two very dear friends Nathan Rogers and Leonard Podolak from Winnipeg. It’ll be just a riot being on stage with those guys and a delight for the audience as well I’m sure!

Why is it important for the community there?
I always give credit to Celtic Colours for integrating the Celtic music of the world into what had been a rather exclusive and isolated society based on preservation of Cape Breton Scottish heritage and culture, and it came at the best time possible. During the late ‘90’s we had already seen a revival of the music on the Island, so many young people were playing and the fear of the loss of our culture wasn’t as strong as it had been a decade or more before that. The culture was strong and the youth at the time, such as myself, were hungry to learn. The festival brought over players from places like Scotland, Ireland and Spain and although I personally experienced some initial hesitation from older members in smaller communities in regards to new influences on our traditional music, it didn’t take long before excitement kicked in and this new bridge between different Celtic cultures was truly welcomed and celebrated. Aside from the many social benefits it has also brought so many visitors to small communities on the Island during a time of year that would otherwise be very quiet for tourism and an opportunity for smaller communities to host international-class artists in their local halls and churches. The community volunteers at Celtic Colours are second to none.

Why the decision to release the new recording during the festival?
Having been away for majority of the last 3 years and missing the festival last year, I figured that the best way to re-enter the local music scene was with a new album and a great performance at the festival … the timing worked out perfectly as well having arrived in Canada on June 18th with studio recording starting on July 3rd. Not to mention, with so many musician friends, audiences as well as industry representatives at the festival, it’s a perfect way to re-connect with everyone and strengthen existing relationships with both audience and industry alike.

What inspired the new recording?
The new recording has actually been in preparation for nearly 3 years but with so much travel on my plate it was hard to be in one place and get it done, especially with my guitarist Seph living in Nova Scotia full time. My first album, Elemental, reflected the contemporary arrangements and style that I was working on at the time and was a great achievement. With this next recording project I wanted to reflect the traditional roots of my background and demonstrate the diversity of the material that I perform. With Elemental, I did a lot of performing with the full band and with this new album it portrays the duo show that I tour with Seph Peters on guitar and the intimate conversation between our instruments, a result of a deep friendship and years of playing tunes together. It’s almost like coming full circle in a way, playing the tried, tested and true tunes of my youth.

What were the challenges of the process?
I think the biggest challenge of the process has been living overseas while Seph was living in Nova Scotia, trying to rehearse and get the material ready and of course finding the time to get into the studio! I was also quite ambitious with recording in July for a release date of October, but putting pressure on myself for deadlines is nothing new! It can also be noted that when taking a traditional approach to any album or material one is always conscious of listening ears… the majority of audiences of Celtic music are well educated in the genre and so there’s always a certain amount of pressure to perform well, especially when taking a non-traditional approach to most tunes.

What were the rewards? How did you feel when it was done?
I think the biggest reward was to finally complete it! It’s been a goal of both mine and Seph’s to record what we do… as I said before, it’s a true musical conversation. Who we are as individuals, with so much in common personally and musically, having been childhood friends and having collaborated for years, it’s a real accomplishment for both of us to produce something so organic and raw. We both felt a sense of happiness and fulfillment upon its completion. Although the album is under my name, it’s truly a collaboration in all respects, from instrumentation to producing and recording not to mention the myriad text messages discussing names which got to a point of complete silliness at times! It’s really rewarding to create art with such an amazing musician such as Seph and such a good friend.

What has the response been like so far from those that have heard it?
Well… to be honest, it’s been under wraps. I’m a stickler for timing and for detail. I haven’t sent out many pre-released copies… there’s been no time! But, for those who have heard it there’s a sense of anticipation and a sense of excitement for sure. Now, whether they’re feeding off my personal excitement or experiencing their own in entirety, I’m not fully sure! We’ll have to let your readers be the real judge when they grab their copy!

How will you promote and market it?
As an artist that wears many hats I’m well versed in marketing and promotion and so I certainly have a plan and of course, many thanks to Celtic Life International to picking up this story and running with it for sure. Building off what has already been established in my career and moving more into the traditional aspect of the genre is important. With Elemental, I couldn’t really do that as it was so contemporary in nature, but appealing to the more roots-based areas of the industry will be possible with this album for sure and I really look forward to exploring that further. Again, coming full circle.

What’s on tap for you for the rest of 2013?
Well, apart from marketing and promoting Attuned, I’m currently working on Unit 5 of Learn Celtic Fiddle, my comprehensive online fiddle teaching program, touring opportunities for my Celtic super-group The Celtic Umbrella Ensemble as well as duo endeavors with Seph and myself. I’m gearing up for my annual touring season in New Zealand early this year as well as an official CD release tour of Attuned in spring / summer 2014 in Canada. To add to my work load is my side-job as booking agent for finger-style guitarists on the Cadyrat Records label (Milwaukee)… in short, I would say that my plate is definitely full and I’m always looking ahead at new developments, opportunities and projects. I can also see a contemporary follow-up album to Elemental in the not-too-distant future!