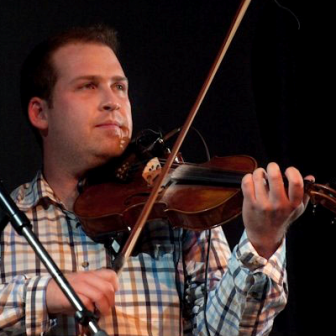 A mainstay performer at the Celtic Colours International Festival, award-winning fiddler Troy MacGillivray is releasing his new CD this fall.

It’s not been easy for the young Canadian to get a new CD together, but MacGillivray, who hails from Lanark, Nova Scotia, wanted to share sets of tunes from composers he admires.

“Last year, I did a small New England tour with Allan Dewar on the piano, and we did the Tune Poets concept — picking a composer and playing that composer’s tunes in a set, so all the tunes were composed by that person,” MacGillivray explained. “For example, we had four jigs all composed by Wilfred Gillis. The next number was a full set of Dan R. MacDonald tunes. The tour went well and people liked the concept, so I decided maybe a similar recording would work. So that is where we are at. I have been trying to get time between playing and teaching to capture some of these sets by people such as J.S. Skinner and Wilfred Gillis.”

It has been fun digging into composers’ books, learning their tunes and sharing them, especially as many of the tunes are not often played. “Some them haven’t been discovered yet,” the fiddler said. “There are so many great tunes out there, and many great composers. Often, a tune can be amazing and if the right backup isn’t there, with the right chords, it might not sound like such a great tune. So it’s the whole package, not only writing the tune, but how it’s presented.”

Still only 33 years old, this new album is MacGillivray’s sixth. It’s no surprise to learn that his musical passion and education began at a very young age.

“I started the fiddle around eight or nine, and piano about the same time,” he said. “I played piano mainly for many years, while playing the fiddle at home. I had my own first fiddle gig in March of 2002 at the Red Shoe Pub in Mabou.

“My sister Kendra began teaching fiddle when she was 16 at the community centre near our house in Lanark, and, in the winter, I would go early in the day to start the fire with my dad and warm the place up for her lessons. Then I would stay and keep the heat going and join in the classes with my three-quarter size fiddle.   Growing up, we lived the culture through our instruments and how we interacted with our families. The music was everything to us.”

Now, MacGillivray’s thoughts are already turning towards his next recording, although he never forces his creativity. “A creative process is inspiration. I don’t put myself under pressure to come up with new material. If it is not right there, it’s not there. There are always tax papers to work on, do that and come back to the music later. The inspiration will hit and it will come together.”

He finds there is huge interest in the fiddle around the world. “Last year I was part of a workshop weekend in Northern Manitoba where there were 650 students, all teenagers, and over 40 instructors – a massive fiddle gathering for a small community in a remote part of Canada. And there are many successful summer camps that are testament to the great interest in the fiddle. Through these camps alone, you can see how many young people are playing and having great fun with it.”

Perhaps part of the appeal is that the fiddle is “at home” in many genres. “It fits so well as a solo instrument or with a band, and it cuts through, has a great range of frequencies and can reveal emotions in the hands of the player.”

As well as pondering his next recording, MacGillivray is thinking about next year’s live shows. He knows he will be busy and can’t guess where his muse will take him, but he knows he will always be a traditional player. “It is what I love. It’s the best.”