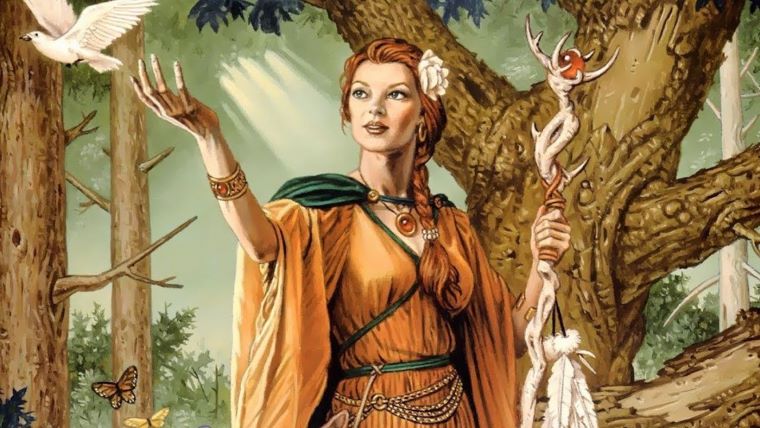 Historically the Celts were a society of warriors using war to gain agricultural land, cattle and other valuable resources. They spread their goddess worshipping practices across the areas they conquered. On the eve of battles the Druids (the Celtic Priests) would conduct lavish ceremonies. Offerings were made to the war goddesses and observations and divination were used to predict the outcome of the battle. After a successful war, select Celtic warriors took part in a ceremony to wed them to the goddess of the land before they could assume dominion over the place and its peoples.

Overtime the worship of the Celtic Goddesses was eroded by the Romans and the Catholic Church. They did not disappear completely but were immortalized in the myths and legends. Examples of this include the stories of Cerridwen and Arianrhod which appear in a collection of Welsh myths known as the Mabinogion. A few of the goddesses were adopted by the Romans like Epona the Celtic horse Goddess, while others like Brigid were renamed as Catholic Saints. Recently with the revival of the Druid and Pagan movements the popularity and interest in the Celtic Goddesses has risen.

Aine (Irish) – Goddess of love, growth, cattle and light. Her name means bright as she lights up the dark. Celebrations for this goddess were held on midsummer’s eve.

Arianrhod (Welsh) – Goddess of fertility, rebirth and the weaving of cosmic time and fate. Her name means “silver wheel,” representing the cycles of life. Other spellings of her name include Aranhod and Arianrod.

Badb (Irish) – A shape-shifting, warrior goddess who symbolises life and death, wisdom and inspiration. She is an aspect of Morrigan.

Blodeewedd (Welsh) – Was created by magic from nine blossoms becoming the wife of Llew Llaw. This enabled Llew Llaw to get around the curse place upon him by his mother, Arianrhod, that prevented him from taking a human wife.

Branwen (Welsh) – The Welsh goddess of love. Her name means “blessed raven.” Bronwyn is a modern-day version of this name.

Brigid (Irish) – This fire goddess’s name means “bright arrow.” Her myths spread into England and Scotland where she is known as Brigantia and Bride respectively. The modern name Bridget derives from this popular triple goddess. 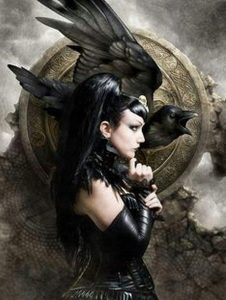 Cerridwen (Irish) – Keeper of the cauldron, goddess of the moon, magic, agriculture, poetry, music, art and science. Her name means “chiding love.” Other common spellings of her name include Cerridwen, Caridwen and Keridwen.

Coventina (English) – Goddess of the sacred waters her shrine is found in Northumberland.

Danu (Irish) – Her name means “knowledge.” From her flowed all of life. She is also linked to fairy hills and a tribe of ancient deities known as Tuatha de Danaan.

Elen (Welsh) – Known as Elen of the ways she appears in the epic myth the Mabinogian. Here she magically built highways for her soldiers to protect the country.

Epona (Irish) – The meaning of her name is “great mare” she is the protector of horses, donkeys and mules.

Henwen (English) – A fertility goddess who,whilst in the form of a magical sow, birthed strange litters. Her name translates as “old white.”

Mabb (Welsh) – As Queen Mabb she acted as midwife to the fairies.

Macha (Irish) – The wild goddess who battles against injustice to woman and children.

Morgan Le Fay (Welsh and Breton) – The sea goddess who is also linked with the fairy folk and the legends of Avalon.

Morrigan (Irish) – A terrifying crow goddess associated with war and death. She is queen of phantoms, demons, shapeshifters and witches.

Rhiannon (Welsh) – One of the Celtic Goddesses of fertility, the moon, night and death. Her name means “night queen.”

Sheela na Gig (Irish) – An ancient crone goddess who is often depicted showing the entrance to her womb.