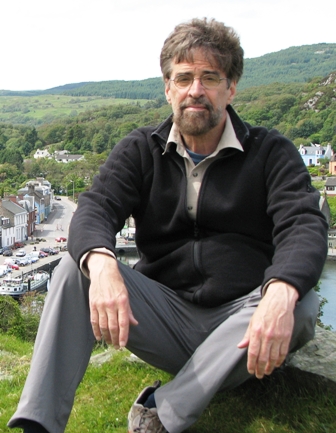 What are your own roots?
My roots are Scottish, Irish, and French Canadian.In Scotland, DNA research led me to meeting Jim McGugan, a long-lost “cousin” who lives in Arbroath; and from there to the island of Gigha in Kintyre, where our earliest ancestor is buried. In Ireland, I have tracked my ancestor Michael Byrnes to New Ross, County Wexford, where he was a contemporary of Patrick Kennedy, a forebear of American president John F. Kennedy.

Why are those roots important to you?
Tracking my roots drove me to scrambling around on Cruach MhicGougain in Kintyre, and to having many other fun adventures. The process not only gave me a whole new sense of self, but inspired two books: How the Scots Invented Canada and Celtic Lightning: How the Scots and the Irish Created a Canadian Nation. Unearthing my own roots inspired me to conceive of what I call “cultural genealogy.” Canadian intellectuals hunker down with geographers and sociologists. That’s a mistake. We assume geography’s limitations and cease investigating our collective past at the western edge of the Atlantic Ocean. Instead, like genealogists, we should keep sleuthing. This nation’s history crosses the Atlantic. And, given that nine million Canadians trace their roots to Scotland and Ireland, it does so more often to those two countries than to anywhere else.

What inspired you to become a writer?
My father was an amateur movie-maker. He wrote scripts and starred as a Humphrey Bogart-type character in several black-and-white films that aired to an audience of family and friends.  Beyond that, I think a sense of being different had something to do with it. In Celtic Lightning, I describe growing up first-language-English in a French-speaking resort town north of Montreal. As a teenager, I resented being called “Anglais” when I was Scottish, Irish, and French. Being misunderstood made me want to set the record straight. I began writing and discovered that, hey, nothing is more fun than telling stories and giving people a piece of your mind.

Are they the same reasons you do it today?
To tell the truth, I love everything about the creative process. I love doing research – in the archives, certainly, but also “on the ground.” I love wrestling with languages, making words say what I want them to say. I love the back and forth that happens between the conscious and the unconscious, and the calling forth of something out of nothingness.

What are the challenges of the profession?
First, you have to master the craft. Malcolm Gladwell wasn’t far off when he suggested that any competency begins after 10,000 hours of focused practice. Apart from that, the main challenge is financial. Making a living as a writer has never been easy. These days, it is harder than ever.

What are the rewards?
Any craftsperson knows the pleasure of creating something that works. To bring a book into existence is thrilling. To publish one that changes the way people think, that makes a difference, is enormously satisfying.

What motivated you to write Celtic Lightning?
I had been investigating my ancestry, and fell to thinking, well, here’s an ancestor who lived in Kintyre in the 1700s. I wondered, what was going on then and there? Like his contemporaries, my ancestor was part of that broader present. And I realized that his “present” – the events and people that shaped him – is through him part of my own history. And that led me to the idea of cultural genealogy, to Richard Dawkins and the transmission through time and across space of ideas and values.

What did you learn during the process?
I realized that Robert the Bruce and Theobald Wolfe Tone belong to Canadian history. And that the same is true of Daniel O’Connell, Somerled of Argyll, Jonathan Swift, Flora MacDonald, Oscar Wilde, William Wallace, and Grace O’Malley. These figures are our forgotten ancestors. They played leading roles in shaping the foundational values that have created the Canadian Nation.

How did you feel when the book was completed?
I felt that I had written what is possibly my best book.

What has the response been like so far from those that have read it?
First readers have hailed the book as original and well-written, describing it as an important addition to the Canadian conversation.

What’s next on your creative agenda?
I have signed on to write a fifth book about Arctic exploration.The recent discovery of the Erebus, one of the lost ships of Sir John Franklin, has proven wonderfully synchronistic.