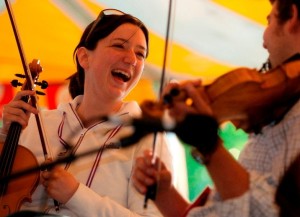 The community of Goderich, Ontario  is the scene of this weekend’s Celtic Roots Festival. The event’s Assistant Artistic Director Katy Johnston fills us in on the details.

What are your roles and responsibilities with the event?
I am the Assistant Artistic Director; my responsibilities include assisting the Artistic Director in fulfilling the artistic vision and mandate of the Celtic Roots Festival and other events, and I also act in a more administrative role ensuring that the small details are taken care of and that a great Celtic experience can be had in Goderich every summer!

What is the event’s core mandate?
The mandate of the Celtic Folk Society is to produce events which foster awareness, participation, and education in the world of traditional Celtic culture. In its beginnings, the Goderich Celtic Folk Society produced a one-day event drawing on traditional musicians from within the county in honour of a deceased musician and teacher from the Goderich area; now, 20 years later, the Celtic Roots Festival is a three-day outdoor festival, drawing artists from the seven Celtic nations and patrons from across Canada and the northern United States.

How has it grown over the years?
From that one day memorial concert, the Celtic Roots Festival now spans three days and over 60 hours of music on 5 separate stages. It now also includes the Celtic College, a week-long series of workshops in all aspects of Celtic music and art – from fiddle, flute, pipes, guitar, piano, and song to stone carving, blacksmithing, Celtic knot-work and working with copper. Some of the world’s foremost exponents of Celtic music have taught at the Celtic College: fiddlers like Kevin Burke, Maeve Donnelly, and Andre Brunet, the entire band Dervish, singers Brian McNeill and Sean Keane and flute player Catherine McEvoy. The Celtic College also features some of the best and brightest up and coming stars of the Celtic scene as well: in the last few years, for example, there have been workshops led by members of The Outside Track, The Once, De Temps Antan, and Shane Cook. The events have also grown to include a Celtic Kids Day Camp, a chance for those aged 4 to 12to have a week experience of Celtic culture as well, with world-renowned teachers as well as local experts. From a tribute to a musician to the cultural and economic event of the year in Huron County, the Celtic Roots Festival now fills hotels and B&Bs and packs restaurants for the duration.

Who attends the gathering?
There is a core of traditional musicians in Southwestern Ontario; many of these fine players and singers were fostered and supported by the Celtic Roots Festival itself! Musicians, artists, and lovers of traditional music and culture gather from across Canada and farther abroad for this annual Celtic celebration.

What can they expect to experience this year?
In 2012, we will be celebrating 20 years of the Celtic Roots Festival; a mix of Festival favourites and bright stars in the Celtic music scene will light up the Festival stages for the weekend. For those who attend the entire week’s celebration at the Celtic College or Celtic Kids Camp, there are intimate evening concerts in our historic Livery Theatre, sessions in our community pubs, and traditional dances on various nights. All of this, of course, is set against the backdrop of Goderich, named “Prettiest Town in Canada” – an attractive place to visit in its own right in beautiful rural Huron County and on the shores of Lake Huron. In late 2011, an F3 tornado devastated this community, and the celebration and rejuvenation of community spirit in the wake of the tragedy will also be running under every event.

Why is it an important event for the Celtic community there?
The Celtic community in Huron County is largely supported by the events of the Celtic Roots Festival; there are a great number of young musicians in the area who grew up learning from the masters of the Celtic College who now support the tradition themselves. Celtic music has become a means of cultural expression, for those with roots in the tradition as well as those with no Celtic roots at all! For example, since the founding of the Celtic College, a harp school has been created in Huron County which now boasts over 20 members, both adults and children, all learning and participating in traditional music.

Why is it an important event for the non-Celtic community there?
Huron County is an artistic and cultural hub, with many more artists and cultural practitioners than would be usually found in other rural areas; the Celtic Roots Festival has become a place for art and culture to be showcased and celebrated in the beautiful summer months in Southwestern Ontario. And as was mentioned, it has become a major economic event of the summer for the county, with many people travelling in for the events and supporting local business and tourism.

What are the plans for the event in the years ahead?
The Celtic Roots Festival continues to grow and will continue to present the best in Celtic music and culture from around the world. The Celtic College, Celtic Kids Camp, and Celtic Roots Festival will continue to be a great Celtic experience for all ages and all levels of skill in a setting which promotes the continuance of these beautiful traditions.

Is enough being done to preserve and promote Celtic culture?
It seems to me – in my opinion, now! – that we’re experiencing a resurgence in interest in Celtic music and culture not only because there are those of us interested in pursuing the traditions of our roots, but because it represents a means of preserving community and social connection through an art form. Celtic music and culture is hardly solitary! It provides a way to connect that can be hard to find in today’s gadget-intense world.

What can we be doing better?
Support local and grassroots music and culture movements! Just as buying locally has the trickling effect of supporting your local economy, seeing live music in your area, attending local events, and producing events which allow the maximum amount of participation in cultural activities will result in the enrichment of every aspect of community. Canada has thriving pockets of Celtic culture from coast to coast, and all that is needed is to reach out and connect with them.