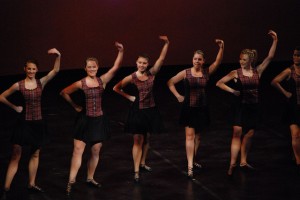 Celtic Sole is a Halifax, Nova Scotia-based dance troupe that comprises more than 20 members who strive to promote ‘a modern twist on a traditional dance form.’ Tara Wilcox fills us in on the details.

How many members of Celtic Sole are there?
At the moment we have 22 members who live in the Halifax area and we meet for practice at least once a week. We expand our number every year with closed auditions. However, we also have several honorary members who live out of province and join us in performances where a larger number of dancers are required.

What are the members’ ethnicity/heritage?
Our dancers are of variable ethnic backgrounds, with a majority having a mix of Scottish, Irish, and Acadian backgrounds. Most of our dancers are from the Atlantic Provinces, and thus tend to have a Celtic background.

When, how and why did you each get involved with Celtic dancing?
Every dancer has their own particular reason for entering the art, but most of us have the same reason for sticking with it. Many joined dancing as a form of exercise or recreation, and some began because it was a family tradition. Most dancers practice well into their teens for the competitive aspect, and then continue to dance because it’s a fun and interactive way to both promote the culture and stay fit.

When did you first get together on this project?
We formed Celtic Sole in September 2010. We were originally composed of 10 dancers and are proud to have more than doubled our number in the past two years.

What is the troupe’s mandate?
We strive to promote a modern twist on a traditional dance form. The majority of us come from a competitive background and are well educated on the traditional movements and rules of Highland Dancing. While we appreciate and hope to honour the culture behind the Highland Dance, we also want to expand from the traditional kilt and bagpipe regime. We aim to incorporate some other forms of dancing into our choreographies, as well as create routines with other professional groups who practice complimentary dance styles. We try to expand our musical and costume selections to encompass modern and novel ideas. We aim to produce a fresh take on Highland Dancing.

What have been some career highlights?
We were very fortunate to have the opportunity to perform as Celtic Sole at the Quebec City International Festival of Military Bands in August of 2011. We were also very pleased to perform at an international basketball game in Halifax, NS. While many of our shows are charity events, conferences and festivals, we are very proud to have coordinated several of these shows with SQUID and Cassie Anne and Maggie Jane MacDonald.

Are young people still interested in Highland Dancing?
Yes. Highland Dance has started to take on more of a “show style” with less emphasis on the strict rules of decades past. This can be seen through the choreographies. This has helped encourage many young people to join Highland Dance. There are streams of young dancers signing up to join class and learn the art.

Are we doing enough to preserve and promote Celtic culture?
Unfortunately, it is difficult for those promoting the Celtic culture to make a lifestyle out of it. It is not a solid career choice at this point because of limited funding. Learning and practicing the various Celtic arts can be very expensive and its financial rewards are very limited. This can detract from the Celtic culture and arts because not everyone can afford to participate in an activity that is not financially self-sustaining. However, there are young people getting involved in the culture, which is always a sign of continuity and tradition. Citadel High School promotes the Gaelic language by offering a Gaelic language class and hosting a Gaelic Club. Additionally, Dalhousie University’s society, “Dal Dance” offers a highland dance class that is currently taught by a member of Celtic Sole.

What can we be doing better?
The recent controversy over the Gaelic College of Arts and Crafts shows that there are varying opinions over how to support and encourage a cultural practice. However, the reality is that young people like to participate in something that they can showcase in various methods; these various methods include, but are not limited to, competitions. As a society we are driven to achieve success and for many youth this success is measured, albeit incorrectly, by a medal or some physical manifestation of victory. For many young dancers the hours of practice are focused toward becoming the next representative of their province in the Canadian Highland Dancing Championship. Although the importance of celebrating the culture is forefront in our mind as a performance group, the reality is that many of us continued to dance through our teens because of the competitive aspect behind dance. It was only after we had achieved our personal success of the art that we turned our minds toward the promotion of the Celtic culture.

What’s next on the troupe’s agenda?
Shows! Shows! Shows! We are hoping to expand our performance resume both nationally and internationally. We are currently composing a piece with the musical talents of Cassie Anne MacDonald and Maggie Jane MacDonald, and collaborating dance choreographies with Zeph Cassie’s school of Irish Dance (Diaga Irish Dance). We are hoping to submit this number to multiple international tattoos.