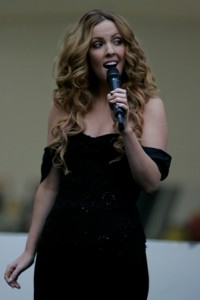 Lisa Lambe is happy just to put her feet up. “I’ve just made myself a cup of tea,” said the newest member of Irish super-group Celtic Woman over the phone from the road.

“We haven’t stopped for what seems like forever, so I’m going to take advantage of our chat and breathe for a few minutes here.”

The multi-talented singer-actress has earned the break.

“Actually,” she laughed, “I haven’t stopped since I was a young girl.”

Indeed, Lambe’s resume is a testament to her work ethic. She began her vocation at the age of three, and graduated with a Bachelor of Acting Studies from Trinity College in Dublin. She has since starred in numerous theatrical productions throughout Ireland, Europe and the UK, has been a featured soloist with Ireland’s RTE Concert Orchestra, and was a soloist on Ireland’s popular TV program, The Late Late Show. Her efforts have taken her from the stage to musical theater, film and television, and radio performances.

The accolades have followed, including a call-out from The Irish Times, which described her as “the finest singer and actress of her generation on whom a whole new foundation of theatre can be built.”

“I’ve never paid much mind to that stuff,” she said . “Once an artist starts believing the hype, it can impact what they do.”

Since joining Celtic Woman in 2010, Lambe has been busier than ever.

“What haven’t we done?” she asked rhetorically. “I don’t even know where to start; recording, rehearsals, tours, appearances…it’s been such a whirlwind of activity that I have hardly had a moment to myself.”

Indeed, the acclaimed quartet have had an incredible twelve months; along with the current string of sold-out shows, their 2012 Christmas album achieved platinum status within weeks of its release, they performed before an estimated audience of 1 billion at a New Year’s Eve concert in China, and Billboard Magazine  named them  World Music Artist of the Year – their seventh such citation from the prestigious publication.

Despite the flurry of activity, Lambe says that she is enjoying every moment of the experience.

“It has been everything I have hoped for, and more. The travelling has certainly been a thrill; getting to see so many different parts of the world and all the different cultures, trying new foods and seeing how people dress.

“For me, though, the most rewarding part has been meeting all of the amazing people everywhere we go, especially the folks who come out to the shows or an autograph session or appearance. I love hearing about their lives and knowing that their stories are really no different than mine.”

Lambe admits that while life on the road isn’t easy at times, she and her peers have a strong support system in place to take the edge off the long days.

“We are very much one big family on tour,” she shared. “All of us – the performers, the management, the road team – we are all there for each other when needed. There isn’t anyone involved with this show that I could not talk to about anything at any time. I am grateful to have made so many life-long friends.”

The cast and crew will likely get to know each other even better over the coming months, as the show works and winds its way across Canada and the United States. After a short summer break, they are back at it this fall across Europe.

“I get a little homesick sometimes,” she confided, adding that it is difficult being away from her new husband, Irish vocalist Simon Morgan. “We manage to see each other whenever we can – he’s very busy with his career also – but we make it a point to speak every day, either by phone or online.”

Lambe stays closely connected to her family as well.

“They are my rock and my foundation,” she shared. “They are quintessential Irish stock; salt of the earth people who keep my feet planted in the soil. They are quick to caution me, amidst all of it, of what is truly important in life; family, friends, health and hard work.

“And my mother never fails to remind me to take a few moments each day to make myself a cup of tea, put my feet up and just breathe…”