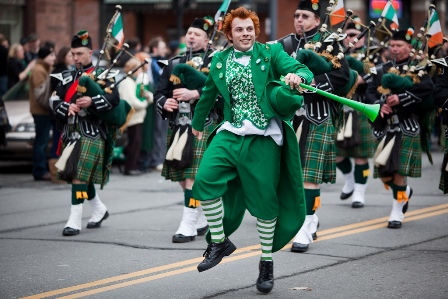 Organizers today announced the dates and the exciting concerts and events lined-up for the 10th annual CelticFest Vancouver. Mark your calendars for March 8-16, and get ready for a festival that promises nine action-packed days of entertainment – with music, dance, theatre, revelry, spectacle and more on tap for folks of all ages and walks of life. Western Canada’s largest Celtic celebration marks a decade of presenting the best of traditional and contemporary Celtic culture in all its rich diversity, spirit and sheer vitality – and everyone is invited!

“Each March over the past decade, Vancouver has come to life with the energy and passion of Celtic culture and spirit,” says Director of Programming, Ross Powell. “In 2014, we’re celebrating our 10th festival, and are thrilled to recreate that magic, to present CelticFest’s best-loved traditions along with some dynamic new shows and events we think people will love. We welcome everyone to come and experience the vibrant Celtic culture that is at the core of our festival, to join us at the concerts  and other events we have in store – from our Gala Concert and the glorious spectacle of the parade to intimate sessions and intriguing workshops. We’ve got a lot happening in 2014, so see you there!”

The festival’s schedule of ticketed events is a ‘must-see’ list of concerts and shows;

New in 2014, The Irish Edge is a special opening concert celebrating the brilliance of Irish music at The Rickshaw Theatre, March 8. Performing is one of Ireland’s fastest-rising groups, the five piece acoustic band, Hermitage Green. Known for their galvanizing live performances, expect powerhouse rhythms driven by the tribal combination of bodhrán and djembe, rhythmic guitar lines, and soaring four-part harmonies.  Also on the bill is Vancouver’s top tier Irish music and cover band, Vagabonds.

Another rousing new addition to the schedule is Ceili’s Kitchen Party, a dynamic unrehearsed jam – sure to draw a full house to the warmth of Granville Street’s Ceili’s Modern Irish Pub on March 13. Leading the kitchen players are The Paperboys’ Tom Landa and fiddler Kalissa Hernandez. They’ll be joined by a veritable who’s-who of Celtic musicians – all with the singular goal of getting the party started!

Other festival ticketed events include:

The wildly popular scotch-tasting event A Whisky Kiss returns to The Cellar on Wednesday, March 12 at 7:00 pm. Folks are advised to get their tickets early, as this event regularly sells out.

For both players and listeners of Celtic music, the CelticFest Sunday Session is back for a spirited go-round at Tom Lee Music Hall on Sunday, March 16 starting at 3:00 pm, hosted by the popular Tim Readman and Jennie Bice.

CelticFest also welcomes the APPLAUSE! Musicals Society to the 2014 festival. Their production of Something Sort of Grandish, a Celtic-themed revue of musicals and show tunes, is scheduled for Tom Lee’s Music Hall on March 15, starting at 2:00 pm.

In addition to the amazing range of ticketed shows, CelticFest continues its tradition of offering a stunning variety of free events for everyone to enjoy.

The festival kicks off Saturday, March 8 at The Village on False Creek with the third annual Celts on the Creek. Already a much-loved tradition, this free afternoon of Celtic entertainment features talented Celtic bands including Pastiche, Willy Blizzard, Crickey Mor and the Irish Wakers, the fabulous and very tall The Green Man, and lots of fun activities for the whole family.

On the weekend of March 15-16, the Celtic Village and Street Market fills both Granville Street between Robson & Nelson and the expanded area of Robson Square with music, dance, fun and frolic, food — and shopping, too! This free weekend-long street fair features music from some of the hottest Celtic music groups around on Mahony & Sons Music Stage, performances from a range of dynamic local dance troupes on the CelticFest Community Stage (at Robson Square), as well as a Bodhránin (that’s a mass bodhrán (Celtic drum) session) on Saturday, and a Penny Whistle Workshop on Sunday.  Look out for the captivating antics of street performers, including Portland, Oregon’s The Unipiper and The Green Man.  Academie Duello and the Society for Creative Anachronism will be showcasing their amazing brand of sword fighting at Celtic Circles located along Granville Street. Village visitors can shop at the Street Market for a vast array of Celtic treasures and the works of gifted artisans, and sample from a wide selection of food and fare. Friends and families can gather and wander, soaking in that special Celtic feeling all weekend long.

Throughout the March 15-16 weekend, Tom Lee Music City Stage on Granville Street hosts a series of fascinating (and, again, free) CelticFest Workshops. This year, workshop attendees can learn about the fascinating background behind Jayme Stone’s Lomax Project along with other intriguing insights into Celtic music and instruments with members of Punters Reunion.

Participating pubs and restaurants in downtown Vancouver’s Granville Entertainment District will be rocking throughout the festival too, with popular music and dance groups on tap to perform.

CelticFest’s new Executive Director, Nancy Cottingham-Powell says, “The 2014 festival is jam-packed, offering audiences and participants of all ages lots of opportunities to revel in Celtic culture in all its many glories. From concert venues to clubs, pubs and restaurants to the city’s streets and squares, our 10th annual festivities promise to be the most dynamic and memorable to date. We’ve got a great festival in store and look forward to seeing everyone there!”