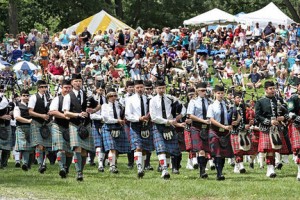 What are your roles and responsibilities with the event?
At the end of May or beginning of June I send out letters to former Patrons, plus other people who have expressed an interest in the Scottish Games. We rent a tent, table and chairs for however many guests we expect. Then I wait for the responses to come in. This year we are anticipating over 100 Patrons. During the next few days I will order ready-made sandwiches, and buy fruit and vegetables trays.  I also have to buy tablecloths, napkins, plates, etc.  Any paper goods I have left from the previous year will be utilized. We also supply snacks, Raspberry iced tea, pink lemonade and beer.

What is the event’s core mandate?
The purpose of our corporation is to provide and promote inofrmational and educational opportunities, programs and activities, not only to persons of Celtic ancestry but also to the general public. We hope to preserve, advance the tradition, history and heritage of Scotland and other Celtic nations. We also give scholarships, and have made donations to other organizations and charities. We are a not-for-profit agency, and are tax exempt.

How has it grown over the years?
The Games were first started 70 some-odd years ago by Clan Douglas and one of the area Pipe Bands. but they withdrew their sponsorship after the 1988 Games. A lot of people were disappointed when there were no Games in 1989. A call went out for all Scots who were interested in starting up the Games to attend a meeting. I had only been to one or two of the Games, but didn’t want to see them go away, so in 1990 I attended the meeting. We had no prize money for Piper, Bands, etc., so we had a Tartan Ball to raise some seed money for the Games we hoped to put on in 1991. The Ball was a success for the next 2 or 3 years, but then attendance dropped off and we have not had one since. We started out with the basics, Heavy Athletics, Pipe Bands, & Massed Bands, and, of course, entertainment. In the beginning I was on the publicity committee. When I volunteered to do the Patrons tent (to alleviate some of the work of one of the members), it was done with the thought that I would just “fill in” for a couple of years.  Then, as I took on more and more responsibilities, the job grew, and I have been doing this for 12 or 15 years.  Gradually, over the years we have added new elements to our Games. We have had Morris Dancers, Sheep Dogs, Highland Cattle, Highland Dancing, Country Dancing, Children’s Athletics, Passport Stamping, Photos, etc.

Who attends the event and what can they expect to experience this year?
The Games is a relaxing day to enjoy an outdoor event with family and friends.  It’s something that everyone who attends looks forward to. We have many repeat Patrons, as well as folks who look forward to this day each year, and show up to just enjoy themselves and everything Celtic. In Clan Row you can check and see what clan you belong to. Then there are the vendors with different foods, and the vendors who display (and sell) everything Scottish, Irish or English.  At noon the Games are officially opened with any clan who wants to be represented entering the field first; after they march off, the bands present come on the field and go through a drill (Massed Bands), then the guest speaker will open the Games.  At 5:00 p.m. is the presentation of prizes, and then the Massed Bands close the Games.

What are the plans for the event in the years ahead?
When the Games are over we start planning for the next year’s Games.  Clan and Vendor letters will be sent a few months before the letters to the Patrons. Also the site will be booked as soon as possible. We have been at Long Branch Park ever since we re-started the Games.