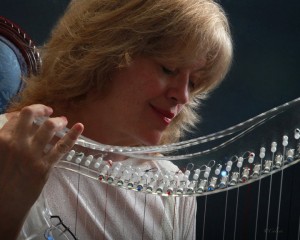 Mutli-talented musician Cheryl Reid O’Hagan picked up the harp in 1990, later releasing two CDs and founding both the Nova Scotia Harp Ring and the first performing harp ensemble in the province, MAEVE. Recently Celtic Life International spoke with her about her passion and profession.

What is your own ethnic background/heritage?
My roots are Scottish, English, Irish. On my Dad’s side were two families named Reid, Groom and Greenlaw. On my Mum’s side were Smith, Grant, Porter and Dickinson. They were Loyalists who were given land tracts outside St. Stephen, N.B. after the American War of Independence. I was brought up nearby in Oak Bay, surrounded by the sea and music. At my Dad’s home, the fiddles came out after supper and when things got really wound up, somebody would get up and shuffle their feet  in what seemed to me the oddest way and it made people whoop and holler too. Grammie chorded at the piano… it was all by ear although Grammie played the organ at church. I figured it all out when I came to Nova Scotia and discovered step dance was still being done in a big way and that it was evidence of a Scottish background. At my Mum’s home, up the hill, there were five sisters who sang together and my Mum made up the harmony by ear and my Dad sang bass – hymns mostly. I have my Aunt Elva’s 1856 Chickering Grand in my living room. She had a dance hall “The Red Lantern” in Old Ridge. So Mum showed me how to chord on the piano with Dad’s fiddle. My whole family was naturally talented but I got the opportunity to get a classical music education as well. I was blessed with both traditions.

How, when and why did you get involved with Celtic Harp?
I sang with the guitar and after awhile that just didn’t feel like “me” any more so I sang unaccompanied which was really enjoyable. But my antennae were up for something for accompaniment. I went to a Mary O’Hara concert in the ’80’s and as I was looking onstage at her harp I had a light bulb moment…. that harp is just a piano. Since I had a degree in piano, I knew I’d found just what I’d been looking for. So I looked around and somebody directed me to Siobhan MacDonnell. She gave me a Sylvia Woods Harp catalogue and I ordered my first harp from her in California. That was 1990. Through learning about the Celtic Harp I learned so much about what I was interested in…. Brehon law, Celtic history, Celtic mythology, the Celtic religion, my own heritage, the harp’s own music. It became far more than an accompanying instrument. I started performing right away and other people wanted to learn it too and where could they find a harp? So that’s how it all came together. I stopped teaching piano and voice and took up the harp or it took up me whichever way you want to think about it.

Are they the same reasons you do it today?
Today I play to share the beauty of the harp. There are still places I want to play and sing for my own enjoyment but I don’t do it for the money or to recruit students. The Celtic harp is my muse.

What have been some other career highlights?
There were Kiwanis Festival scholarships and winning the Atlantic Provinces Folk Singing Championships at Mount Allison, competing in the Rose Bowl Voice competition and singing and playing for the Who’s Who, but honestly the biggest thrill was sitting down to Christmas dinner and hearing “The Huron Carol” from my CD “The Darkest Midnight”  being played on CBC Radio. That never gets old !

Are young people still interested in Celtic Harp?
So much…. more than ever actually. The more people are exposed to its beauty, the more they dream of  playing it. Sometimes a child will have seen it in a Disney movie or heard it in a video game or they see the pedal harp at the Nutcracker Suite. I’ve taken  a small 29 string folk harp, a 36 string Celtic floor harp and a Chinese Harp (Guzheng) into schools and kids are fascinated. My youngest student was a five year old that heard it on the car radio and just said ” Mummy, I want to play that”. I have a teenaged student who loves the Celtic thing and is learning Gaelic too and prefers Celtic tunes to play. You may find it interesting though, that the vast majority of my students, are women over 50. It’s an easy instrument to pick up because it’s the piano logic wise and its long sustain means fewer strings should be plucked at one time. It fills a place spiritually in us adults. We notice how it changes a room. We need our “harp fix” every day.

Are we doing enough to preserve and promote Celtic culture?
Yes. I think here in Nova Scotia a real corner has been turned due to the work done by the Department of Gaelic Affairs. Preserving the language comes first and there are several opportunities now to learn Gaelic through some high schools in the province or Gaelic Language Societies. The Gaelic College in St. Ann’s has always nurtured the language. I took a beginner course from Margot Caruthers and admire the work done by B& R recordings (Rosemary McCormack) to preserve the songs of the bards and the Cape Breton Singers. I was honoured to have participated in a recording put together by Rosemary in 1997 called “Women’s Voices, Gaelic Roots”. Since 1998, when I opened East coast Harp shop, I’ve been bringing the best Celtic Harps in the world to people in Nova Scotia. I held a Celtic Harp Boot Camp last year and there were twenty Celtic harpers in the room, all kindred spirits. I was so proud I could say I’d had a hand in helping each one find their dream harp and in helping them learn to play it. Nova Scotia is now becoming a Mecca for Celtic harpers. Recently we have attracted three new harp teachers and a harp builder. So it looks like the future of the Celtic Harp in Nova Scotia is pretty healthy and vibrant.

What can we be doing better?
I’ve often thought the harp has been a pretty face on the Irish flag… establishments use it as a symbol but you rarely see one there. That’s changing. Sessions are fun with harps and they sound great with other instruments.  Harps are finding their way to “everywhere”. Soundscapes usually have the harp “button”  pushed on the keyboard. I guess it’s cheaper but it’s so dry … doesn’t sound anything like the real thing. The Clarsach is important to the culture of the Celts in so many ways. It’s mystic power was known to the ancients and today its vibrations are being re-discovered  to heal the energetic and physical body (Harp Therapy) and is being used to help people go from this world to the next (Thanatology). Today we see harps of all sizes, materials and colours, amplified or acoustic. I myself have Lucy, an electric light harp, a Dusty Strings 36 with a pick up for big rooms and a restored Briggs Ossian 31, an Irish harp built by an English man in Glasgow.