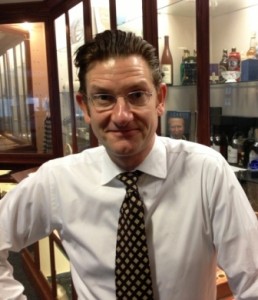 President of both the Illinois Saint Andrew Society and the Chicago Scots, Gus Noble, carries the values of his forefathers – education, enterprise and equality – to future generations. Here he answers our Seven Celtic Questions.

What are your own Celtic roots?
I am Scottish – by birth, by heritage, by inclination and by employment. I was born in Dundee in 1969, grew up in Duns, Berwickshire, studied at Stirling University (1987-1991) and moved to Chicago on 16 November 1992.

Why are those roots important to you?
My identity as a Scot informs everything I am, everything I do and everything I hope to be. As James Baldwin said, “If you know from whence you came, there really are no limitations to where you can go.”

What does it mean to you today to be of Celtic heritage?
Devilishly handsome good looks! My roots and my identity have a profound influence on my sense of place and time. I feel a deep connection to the lives of those who went before us and an obligation to those who will come after us. I’m very proud to be a member of the Scottish American community. When I became an immigrant 22 years ago, I looked to Chicago’s Celtic community for support. I found warmth, generosity, thoughtfulness – true friendship. And I felt a real, living bond back to the land I had left – a bond that went beyond the Scotland of “breeks, bonnets and Brigadoon,”  but to contemporary Scotland and to the culture that made me.

How are you involved with the Celtic community?

My involvement in the Celtic community is both personal and professional. I’m the President of the Illinois Saint Andrew Society. In this capacity I oversee our elder care operations at our nursing home (the Scottish Home) and our cultural work as the Chicago Scots. I started attending Chicago Scots’ events in the early-mid ‘90s. After working for the British Consulate General in Chicago and the Welsh Assembly Government, I started working for the Society in 2004. Being involved with the Society is one of the most rewarding things I’ve ever done.

Why is it important to keep Celtic culture alive?
By keeping our culture alive we transmit from one generation to the next the proud assurance of what it means to be Scottish. And we can also do a lot of good, warm a lot of hearts and make a lot of people smile. We measure our reward not by dollars and cents, but two other standards –  by the sense of identity we help people to develop through connecting them to Scotland, history, heritage and home and by the fact that a daughter can put her head on a pillow at night and sleep soundly, knowing that her mother is cared for and loved at the Scottish Home.

We can always do more. I see great opportunity in the education of the next generation. I’d like to see a series of educational modules tied to the world’s only Scottish American Hall of Fame, which recognizes people of Scottish heritage who have shaped life in the USA. The Hall of Fame is located at our Scottish Home. These modules will be available online for school teachers, parents, or Scottish cultural organizations to download, perhaps in conjunction with significant occasions like Tartan Day or Saint Andrew’s Day.  The modules will feature important Scots and detail Scottish accomplishments and contributions to North America.

What can we be doing better?
To truly engage with the next generations, we must be more inclusive and focus on what it means to be Scottish. While blood and birthplace are and will always be very important, I believe that, particularly to the coming generations of Americans who will likely have a claim on multiple heritages, Scottish identity will become more about inclination and choice. I believe that there are three values shared by every Scottish identity – a belief in education that is inspired by the Scottish enlightenment, a belief in enterprise that is inspired by Scotland’s great spirit of innovation and a belief in the equality of every individual and every opportunity that is inspired by Robert Burns’ great poem, A Man’s A Man. These values are the best qualities of the Scots. By focusing on these values, we will be inclusive, welcoming and focused on what it means to be Scottish – and this is what will inspire the next generation.