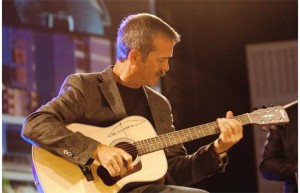 More than a dozen years ago, Canadian musicians Dave Hadfield and the Purveyors took to the stage at the International Celtic Festival in Brittany, France, to play some foot-stomping fiddle tunes and original folk songs. The line-up that night included Dave’s brother, astronaut Chris Hadfield. Chris returned to Earth this May after spending 146 days at the International Space Station (ISS) from where he recorded an album of original songs and reached out to people around the world through music. The first of the original songs Chris recorded in space, Jewel in the Night, was written by Dave. “I helped Chris come up with a portfolio of songs for this album,” said Dave. “I’ve got a little more free time so I was able to help him out.”

Dave fronts the Purveyors performances at pubs in Barrie, Ontario, when he’s not flying over the Pole on 15-hour flights between Toronto and Beijing as an airline captain. “Music is something we have to do. It’s not a question of finding time for it, it’s a question of finding time for other things,” said Dave. Ivan Hansen takes us inside the Hadfield brothers’ musical collaboration.

Cape Canaveral, Florida, it was not. Chilling winds howled across the Kazakh steppe, as the mercury dropped to minus 20. Evolved from a once-secret Cold War missile test-range, the Baikonur Cosmodrome is the world’s busiest spaceport.

Last December, on the day before launch, quarantined Canadian astronaut Chris Hadfield had a visitor. His older brother Dave was allowed half an hour, but could not get closer than 3 metres, despite medical clearance. Finding a vacant room, they sang family favourites; a fitting send-off tradition. Chris’ wife Helene looked on.

“I love listening to him. I’m not musical but I love that he is,” she said. “It gives him a release of energy and fun he can’t get elsewhere. Chris relaxes when he plays, and it’s a great creative outlet.”

One of the songs they played was Big Smoke. Dave wrote it for Chris’ first spaceflight in 1995. “When the shuttle launched it left a big trail of steam and other gas pointing up into the sky,” said Dave, “And there’s the idea of smoke, hiding things. You never really know what the future’s going to bring.”

The next day, December 19, 2012, Chris kissed Helene goodbye—through the glass wall. “I was worried about something happening that would stop him from going, like tripping and breaking an ankle,” said Helene. “As for the launch and being on top of a bomb, that doesn’t bother me because if you worry about it you’ll make yourself crazy.”

Qualified to fly the Soyuz, Chris was in the left seat as 1st Flight Engineer (Co-Pilot). Roman Romanenko, seated in the middle, was Soyuz Commander, with Dr. Tom Marshburn, 2nd Flight Engineer on the right.

At dusk, fingers of fire flickered for an instant before erupting in a brilliant yellow-orange conflagration that raced through the blast pit, accompanied by the smoke and earsplitting roar of rocket engines. Rising on a tower of flame, Expedition 34/35 was International Space Station bound, where, for Expedition 35, Chris would be Commander.

Not long after docking at the austere orbital outpost, Chris made a personal rendezvous with the onboard Canadian-made Larrivée Parlor acoustic guitar. He sang carols in the Cupola’s 360-degree Earth observatory. Jewel in the Night was Chris’ first recording on the space station, just in time for Christmas.

For the following five months, his days were heavily choreographed; right down to five-minute increments. “On weekends, we do get some free time on Sunday afternoons so, just as I sort of squeeze it in on Earth, I will be playing guitar,” he said. “Music brings some art to a place that is otherwise kind of a serious laboratory.”

In addition to a full slate of science experiments, Chris exercised for two hours a day to combat muscle and bone loss, the biggest health hazard on long-duration spaceflights. Astronauts must stay fit enough to deal with possible emergencies like depressurization, fire, chemical leaks and evacuation. Formed to raise morale at NASA after the first space shuttle disaster, Max-Q is an astronaut band that Chris plays in, along with Bandella, another band composed of astronauts. He has also played with Dave Hadfield and Friends, now the Purveyors.

“At the 1997 World Celtic Music Festival in Brittany, we were recruited to go along with Chris, sort of as his back-up band,” said Dave. “He insisted that we never practice in hotel rooms, so we worked up some songs playing street cafés.”

Chris and Dave also share a love of aviation. Their dad Roger was the first flying instructor at the Sarnia Ontario Airport when they lived there—today renamed Sarnia Chris Hadfield Airport. “Chris has been flying since before he was born,” said his Mom Eleanor. Chris was seven when they moved to a corn farm, in Milton, Ontario. Roger went on to fly for Air Canada. Chris and brothers Dave and Phil became air cadets. Today, Dave and Phil are captains with Air Canada, and Chris was an award-winning fighter test-pilot with the Air Force, retiring as a Colonel. There are also two daughters; Patty, and Anna-Jean.

Around the time Neil Armstrong and Buzz Aldrin were landing on the moon, Chris and Dave bought an old guitar for $5 at an auction. Even at that price it was no bargain. “We worked and pooled our money to buy a decent acoustic,” Chris said. They learned to play together, and have been sharing songs ever since. “If David did something, Chris would have to do it too,” said Eleanor. Meanwhile, Chris was in his school choir then in high school he played the trombone.

He also acted in a high school production of The Man Who Came to Dinner. For fellow student Helene (nee Walter), there wasn’t much to do—as understudy for the female lead, she was bored. One day Chris asked Helene if she needed a ride home. “I took a ride home, and that was that. We were dating,” she said. Four years later, they were married.

Helene said about Chris’ selection for the ISS expedition, “I thought it was the best thing ever; it’s what he’s wanted, it’s what he’s worked for. In the grand scheme of your life together, five months is not that much time.” While in orbit, Chris kept in touch through email, daily phone calls, and weekly video-conferences.

Chris’ sons Evan and Kyle encouraged him to start a Twitter account as a way to share his experiences. Managing the account, Evan has dealt with a million followers who signed on for Chris’ several-times-a-day micro-blog posts, photos from space, and video-conferences.

“He’s very social, and one of the best things about this mission is that people can see Chris’ quirky sense of humor,” said Helene. “He’s not afraid to kind of be out there, showing his enjoyment. And he’s a workaholic, but he doesn’t think of it that way — it’s all fun.”

Chris’ last live video downlink from ISS was on May 6, for Music Monday, the Coalition for Music Education’s signature event. Chris co-wrote this year’s theme song, I.S.S. (Is Somebody Singing?), with Ed Robertson of Barenaked Ladies. The TV production of the video, released in February, went viral online. “I’m pretty proud of this little ditty,” said Robertson. Across Canada, 700,000 students took part in the day’s festivities.

A showcase concert was staged at Ontario Science Centre, where Wexford Gleeks and the Chris Hadfield Public School Choir sang along with Chris who was on-screen, playing live from the ISS. After the performance, Canadian astronaut Jeremy Hansen said from the Science Centre, “Chris, the atmosphere is absolutely electric here.”

Chris, his guitar floating before him, replied, “Jeremy, the atmosphere up here is mostly acoustic.” Then, as he has done countless times before, Chris entertained questions from students. “He loves to share when he thinks something is cool and exciting, and he’s so good with kids,” said Helene. Award-winning folk, root, and children’s music producer Paul Mills, having worked with Dave and Chris before, came up with the idea of Chris recording an album of songs in space. “It’s just become huge, I think largely because of the song Chris co-wrote with Ed Robertson. A lot of people have really been inspired—it’s captured the public’s imagination,” Mills said. “And most people aren’t aware that we’re continuing to record up there.” Chris sent down his vocal and guitar tracks; terrestrial musicians will also play a part. The songs include Space Station Blues, Moving On, Feet Up, and Ride That Lightning. “All of them touch on the experience of being up there,” Mills said at the time. “There’s a space lullaby that Chris has recorded. And there’s a love song to his wife who he’s away from.”