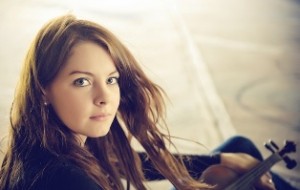 As a Canadian fiddler with a firm foundation in the traditional music of Cape Breton and the irrepressible curiosity of an artist driven to create and discover, Chrissy Crowley is now bringing her music worldwide. She has performed throughout Canada, the United States, as well as Ireland, Scotland, Cuba, and the Dominican Republic, captivating audiences with a talent that belies her youth. Celtic Life International recently caught up with Crowley in between gigs and the recording of her new CD.

What inspired you to start fiddling?
I come from a musical family. My grandfather from Newfoundland played Irish fiddle; my grandfather from Cape Breton played Cape Breton/Scottish fiddle. Both of my grandfathers passed away when I was very young so it wasn’t until I was 12 that I realized how musical of a family I come from. Jason Roach, a piano player from Cheticamp, brought a fiddler to my grandmother’s house to play. I fell in love with the music and decided to start playing the next day. Jason, despite being a piano player and not a fiddler, actually taught me the basics, and I taught myself from that point on.  I became obsessed with it and would roll out of bed, grab my fiddle and play for hours. I used to pretend I was sick so I could stay home from school and play. After I started learning to play Cape Breton style, I studied the Irish music as well and I’ve become a bit of a hybrid fiddler. I travel frequently with my music and love studying different styles of fiddle playing. I don’t consider myself limited to one genre because of where I was raised, but there will always be hints of Cape Breton in my music no matter what style I’m playing.

From your perspective, what is the appeal of Celtic-inspired music?
Celtic music is appealing because it’s a highly unique tradition-based style that has been maintained for hundred of years. I think many people are drawn to it for how broad the demographic of fans is and how far and wide the music stretches. We have people from all walks of life coming to our shows, and they always tell us a similar story of how they were initially drawn to the fiery style and pulse of Celtic music, and became more involved upon realizing how inclusive and available it can be. There are Celtic festivals all over the world and a variety of different personalities in attendance- all of which are drawn to the driving beat of the music, the same beat found in rock, funk, disco, country and so forth.

Tell us about the new recording.
The new recording, while still maintaining a traditional style of playing, is more contemporary then my last record. I’m still incorporating different genres into traditional tunes, but the approach was to make the arrangements more complex and let the various genres sound more prominently in the final mix. My music has grown a lot over the last couple of years and I’ve been exposed to more and more exciting new sounds. As soon as I sat back and started listening to some of the final mixes of the tunes and arrangements I’ve been working on with the musicians, I thought “jeez, it’s not too hard to tell I’ve been traveling!”

Where was it recorded?
The  album was recorded at Lakewind Sound Studio and Soundpark Studio in Cape Breton, NS.

What were the challenges of the recording process?
The biggest challenge all musicians face in the studio is trying to get the mess of ideas and sounds that are in your head to start making sense. I take a different approach where I only half-arrange the tunes I’ve written before the actual studio date. By going in to the studio with a half blank slate and coupling that slate with the pressure of having to get the job done in a timely fashion, I find the actual recording process more exiting. Instead of just a musical regurgitation of over-rehearsed songs, it’s more creative and interesting sounds start to come out. We have a little more freedom to play with the studio tools. It might mean more time at the studio in the long run, but because a lot has to be done live off the floor, you also hear the spontaneity and excitement that gets lost when a musician makes the transition from a live performance to the studio.

What is the title and when is it due out?
The title is “Last Night’s Fun” and it is due out this winter. The very first track is a big blast of Irish reels, the first of which is called Last Night’s Fun. I loved the tune’s name, because it sums up my whole approach to the studio. To keep things fresh and lively, we do a lot of the final arranging the night before so its still exciting for everyone going into the studio the next day and the ideas are still rolling. Everything you hear is literally last night’s fun. I get away with this because the guys on the record are phenomenal musicians!

How have you grown as a songwriter and performing artist since the last recording?
Fiddle is a loud instrument… maybe not as loud as the pipes, but it has a way of standing out. There’s nothing worse than a fiddler trying to taking over an arrangement and not recognizing when the right time is to step back.  I thought about this a little more going into this record… it’s my record so I can do what I want (hahaha) but I paid more attention to what roles I want the fiddle to have in the arrangements. Sure I can show off where I want to, but I’m also playing with incredible musicians so I took more time to make everything work together in harmony. The fiddle is taking the strongest role obviously (it’s a fiddle record!) but there are tasteful ways to enter and exit a solo and I experimented a little more in finding the right entry points, so the overall musicianship is heard, not just technicality.

What’s next on your agenda?
I’ll be wrapping up the CD and arranging the release dates. I got a new house in Sydney this summer and am still trying to move into it, so I think I’ll throw my suitcase out for a couple of weeks and try to stay near home. There are still lots of local gigs coming up so keep an eye on the website!