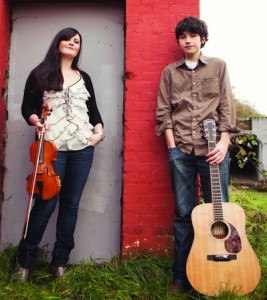 Canadian-born Qristina and Quinn Bachand have quickly emerged at the top of the international Celtic music world, winning 2010 Top Traditional Group and 2011 Top Duo at the Irish Music Awards. Since 2009 the duo has also received three Canadian Folk Music Award nominations, including Instrumental Album of the Year and Young Performer of the Year as well as a Western Canadian Music Award nomination for World Recording of the Year. This Saturday night the siblings are hosting a Celtic Christmas Ceilidh in Victoria, BC. Recently they answered our Seven Celtic Questions.

What are your own Celtic roots?
We have French roots on our dad’s side and Spanish roots on our mother’s side.   Having been born in B.C. we didn’t grow up in a heavy Celtic culture, such as Cape Breton, however our parents exposed us to a wide variety of music styles from a very early age. We took an interest in Celtic music even before we knew of our Celtic roots.  Our French ancestors were from Brittany and on our Spanish side, our grandfather’s family came from Asturias – both strong Celtic rooted areas.

Why are those roots important to you?
Roots are important because they help you understand your background, but what ultimately defines who you are as a person and musician is your passion. Our Celtic heritage is a piece of the puzzle that makes up who we are. We play Celtic music because we are passionate about Celtic music, not because of our Celtic roots. In fact, although we play a variety of Celtic styles, it is Irish traditional music we are the most passionate about. .

What does it mean to you to be of Celtic heritage?
We are very proud of our multi-cultural heritage and our Celtic roots.

How are you involved with the Celtic community?
In addition to performing at Celtic festivals in Canada, the U.S. and Europe, we also teach fiddle and guitar at home and at music camps. Also, for many years our family has been very involved with a non profit society that promotes fiddle music, the Victoria Fiddle Society. Our mom, who has been on the Board of Directors since 2004, organized a  two way youth exchange in 2006 with fiddlers from the Cape Breton Fiddlers Association. This was a fabulous once-in-a-lifetime experience we’ll never forget.  Several years ago she also started an annual Fiddle Festival here in Victoria.  In addition, our mom is the Section Head for Fiddle, a division of the Greater Victoria Performing Arts Festival.  For years we have participated in the Fiddle Section of the festival and for the past two years we have donated an award for a new category, “Fiddle & Accompanist”.  This is one way we like to support our Celtic / Fiddle community.

Why is it important to keep Celtic culture alive?
Celtic culture is an important part of our Canadian heritage. We must keep this culture alive so it can be passed on to future generations and not be lost. We feel that in order to attract the attention of the younger generation, we need to make the music relevant and exciting, while still being mindful of its origins.

In your estimation, are we doing enough to keep Celtic culture alive?
With festivals such as Celtic Colours, Celtic culture is thriving in Cape Breton and other eastern provinces. They enjoy strong cultural support from the local governments and arts organizations. Unfortunately, that is not the case for us on the West Coast of Canada. However, the advantage of being a B.C. bred fiddler is the West Coast’s tolerance for experimentation and improvisation within traditional fiddle tunes. As West Coasters we’ve been encouraged to find our own ‘voice’, explore all kinds of other traditions and borrow bits of different styles  to come up with our own distinctive sound and we are proud of that.

What can we be doing better?
For us in BC, it would be nice to have the type of support artists in the Maritime provinces enjoy, including more recognition of traditional folk music artists and definitely more arts funding