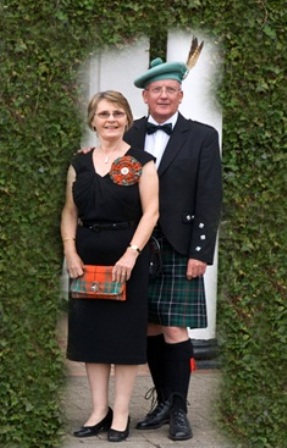 According to Hector MacAulay, the Clan MacAulay is the first to be formed based on democracy. The story goes that after a number of individuals conducted research, no clear bloodline to Aulay MacAulay could be found. Given that, the clan held a debate and ultimately agreed to adopt a democratic system to elect a chief who would represent the Clan MacAulay Association, which is made up of MacAulays from all the different branches and families. “This was a defining moment in how the clan evolved,” MacAulay contends.

MacAulay first became involved with the clan in 2007 when, after 250 years of dormancy, the clan was becoming revitalized. He became the clan’s organizing secretary in 1998 and in 2010 was elected chief for a five-year period. MacAulay says the work of Ian MacMillan MacAulay, who was responsible for rebuilding the clan association, inspired him. “I realized how important having a clan association was to so many MacAulays all over the world who wanted to be part of an organization which reflected their history, culture, identity and gave them a sense of belonging to one large, happy family,” MacAulay says.

The clan’s origins are vague. Differing historical accounts exist of Clan MacAulay and many different families from Scotland and Ireland with no historical connection. MacAulay says the hereditary clan chiefs died out centuries ago. The last was Aulay MacAulay of Ardencaple, who died in 1767. His castle was sold and demolished in 1954 with only a lone tower left, which can be seen today.

Happily, the clan is healthier these days. Out of 400 members globally, about 60 are actively involved. When the clan association was initially established, direct mail was used to build membership, but more now sign up through the website. “We shall continue to adapt to the 21st century,” MacAulay declares. “We shall ensure our members have access to a rich and ready-made history and a kinship stretching around the world. For them, we create a special bond and a sense of belonging.”